We took the 6 hour jeepney ride to Port Barton and even though we showed up to the terminal an hour and a half before the scheduled departure time, we managed to only just get the last two seats at the very back of the jeepney next to a couple of caged puppies, and a giant heap of luggage.

On the way, sure enough the rain returned and we were lucky to make it through the knee-high puddles on the mud road leading to Port Barton town.

We were greeted at our hotel, The El Busero Inn, by a very kind and friendly fellow named Peter. He checked us into our room on the 2nd floor which was beautiful. It had its own massive patio, complete with a wicker hammock overlooking the sea. In fact the sea lapped up almost to the stairs of the restaurant below us, it was amazing. Unfortunately the rain continued but for some reason it’s just better to be stuck in the rain if you get to look out at the sea.

The next day the rain cleared up.  The main thing to do in Port Barton is an island hopping tour to some of the many stunning spots in the archipelago off the coast. We were reluctant to book the tour on our first day of sun so instead we spent the day laying on the beautiful Philippines beach and enjoying the clear skies. The rain returned in the afternoon for a few hours, at which point we just chilled out in our hammocks and watched an incredible lightning show terrorize the seas not a kilometre in front of our hotel. The bolts of light pierced the sea and our eardrums in equal measure with spectacular crashes. we have never seen lightning so close. In the afternoon the sky cleared up just in time to treat us to an extraordinary sunset which we enjoyed with a few Pina Coladas at our favourite restaurant bar, the Barton Bistro.

And that was the story for our 5 days in Port Barton, the mornings were sunny and beautiful for a couple of hours, and then there would be 3 – 4 hours of thunderstorms in the afternoon before clearing up for cocktails at sunset. Of course this is not the ideal conditions for a beach holiday, but it sure beats sitting in cafes in towns away from the sea, waiting for any sign of the rain stopping.

One night at the Barton Bistro we had a few extra cocktails and got talking to an American family who had been in Port Barton for 10 days. They had a boat every day take them out to the islands, cook them lunch and even go spear fishing at a fraction of a cost of the local “tours” that are organized from Barton town. We decided to try our luck with them on an island hopping tour, so the next morning we met them at their hotel and headed out. Already the weather was looking precarious, with dark clouds looming on the horizon. We managed to get in a couple of hours of good snorkelling and a few failed attempts at spear fishing before we were rushed back on the boat by the driver. He was clearly concerned about the ensuing storm, which was so bad that we couldn’t return to Port Barton town. We were forced to retreat to a nearby island to wait out the aggressive thunder showers.

With nothing else to do on the island, the American guys and I, went out for another snorkel. The water was much warmer than the rain, which poured from the sky like a giant faucet. When the weather cleared we headed back to town and finished the day off as we did every day in Port Barton, with a nice cocktail on the beach, watching the sun set onto the sea.

On our last day in Port Barton we had the standard 3 hours of sunshine in the morning, which we used to walk around and check out the town. We stumbled across a cock fight, which isn’t really our thing but because its such a huge part of Filippino culture we decided to stop and watch a couple fights. I was thinking of placing a bet as the locals do, thinking that it couldn’t be much betting with a bunch of underpaid fishermen, but to my surprise the minimum bet was around $30 dollars with some of the pots reaching 16,000 pesos, around $400! Which is an amazing amount of money for a group of guys who scrape by on a living from the sea. Anyway we ended up just being spectators and although the sport itself is pretty gruesome, the excitement on the street before and during each fight was awesome. Fifty or more guys were screaming at the top of their lungs, taking and giving bets while one guy collected fistfuls of money from each better. I don’t know how he kept track. The fights lasted little more than a minute at which point the loosing rooster was carried off, bloodied and lifeless, to a chorus of excited hollering by those who had one or lost money on this outcome. It was interesting to say the least, and as morbid the sport is, we considered ourselves lucky to have witnessed it, because not many tourists are able to find the elusive authentic cock fight in the Philippines.

Click On Any One Of The Following Photos To Show A Quick Slideshow Of All The Images From This Blog! 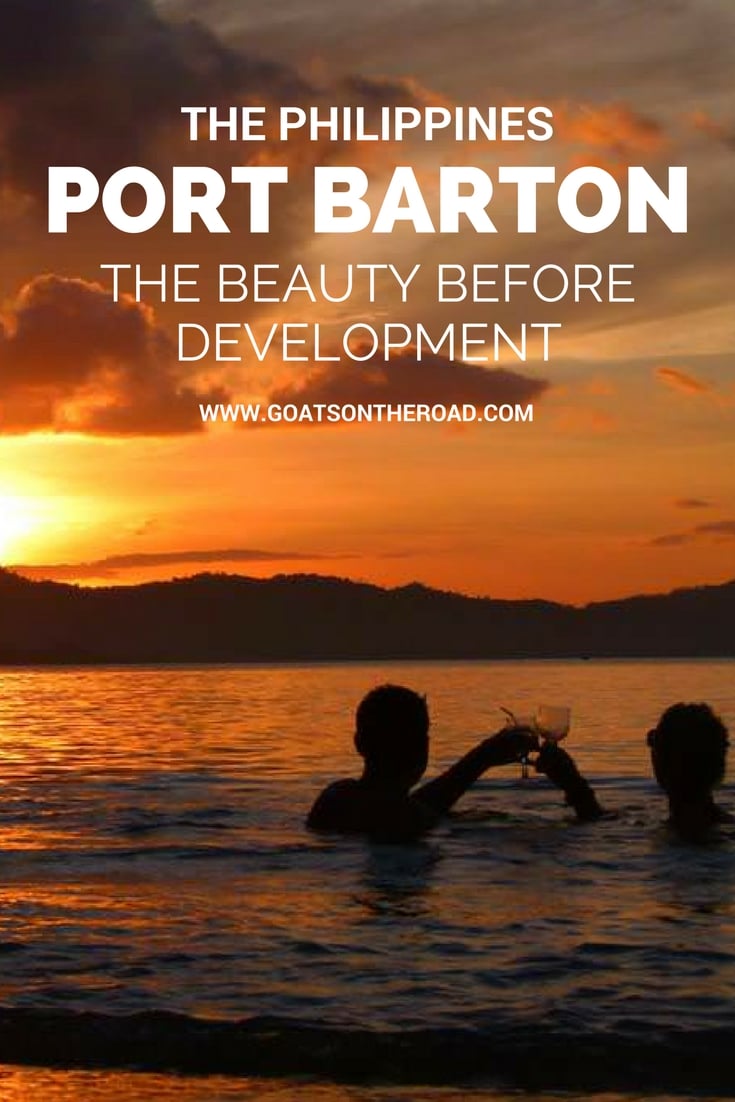 El Nido, Philippines – Sunshine and Island Hopping, This Is The Life! 2 thoughts on “Port Barton, Philippines – The Beauty Before Development”