Ashura: A Month Of Sadness & Self-Flagellation In Iran

Have you ever considered hitting yourself with chains to remember a man who died 1333 years ago? This may sound strange to non-religious Westerners, but to the majority of Iran, it’s an annual occurence. The mournful, melancholy parades and nation-wide sadness is called Ashura (or Muharram) and it is all in memory of the death of Imam Hussein, the Profit Muhammad’s Grandson.

“Every day is Ashura, every land is Karbala”

Millions of Shia Muslims throughout the region take to the streets and publicly display their mourning for Imam Husayn ibn Ali ibn Abi Talib, who was starved and then beheaded in Karbala, Iraq in 680 A.D. The somber parades and mass self-flagellation are a shocking insight into the intensity of the Iranian culture of martyrdom. Throngs of men slowly saunter the streets in a trance-like state while whipping themselves with chains and openly sobbing for the loss of their hero, some 1333 years ago. 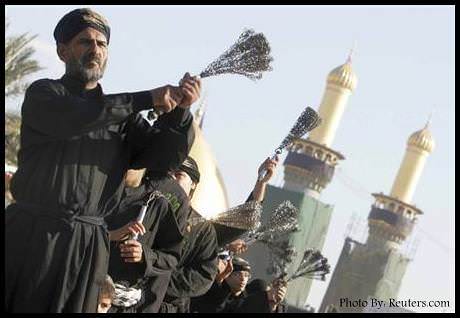 The ceremonies last 10 days, but the country remains in a state of mourning for as long as two months! No music is played in the streets and public displays of happiness would be considered inappropriate during this time. The main, 10 day commemoration culminates to the final day of Ashura when the crowds on the street reach almost unimaginable proportions. The hypnotic unison of the clanging chains, together with the rhythmic beat of the drums and the defeated cry of depressed hymns, ring in the streets and create a very morose atmosphere. 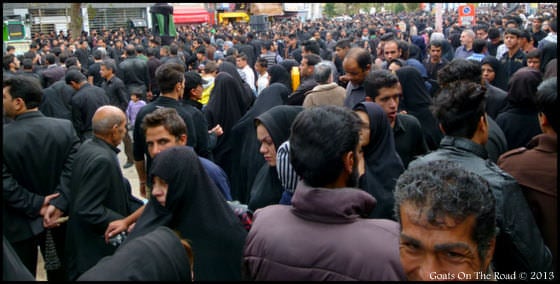 We were in the city of Kerman for the final day of Ashura and it was an extraordinary ambiance of pure heart-broken sorrow, all based around a holy man who died centuries ago. Thousands of men openly sobbed while hitting themselves with chains. Lined in perfect rows, they repeated ancient hymns as they navigated through the closed-off streets.

Women, equally bereaved, silently prayed on their knees with tears of true sorrow soaking their cheeks. The entire ceremony was so intense that it is impossible to describe with words.

One should keep in mind that there is also a large population of non-Muslim Iranians, and for them, the annual depression is both dreaded and despised. For weeks on end the population of Iran slips into a state of gloom that is as contagious as it is intriguing and for non-Muslims, it is a terrible inconvenience.

One non-Muslim Iranian girl told us:

“Shiraz is usually a beautiful city, famous for poetry and culture where people play music on the streets. But during Ashura, all are expected to mourn and the fun ceases to exist for weeks on end.”

As visitors, we found the ceremonies to be extremely interesting, but we can understand the hardships the annual disturbance must impose on the non-Muslim citizens of the country. Ashura has not only enlightened us on the level of faith that still exists in Iran, but it has also given us a better insight into the diverse religious demographic of this Islamic Republic.

Ashura wasn’t all doom and gloom. In the evenings, the rich give to the poor in an amazing display of generosity. Free meals are on every corner, where restaurant and hotel owners cook massive vats of food and hand it out in the streets. In Kerman, we were lucky enough to partake in this part of Ashura and we’re glad we did. 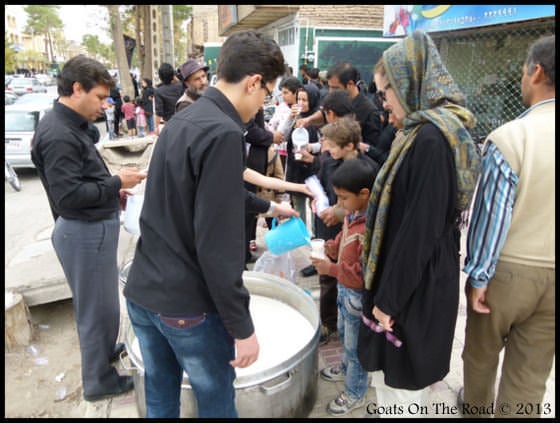 Our hotel owner was one of the fortunate people who is wealthy enough to give away food. They sacrificed 6 lambs which they cooked into a stew in 3 enormous cauldrons. We helped to cook the food and then hand it out the following morning.

All in all our experience with Ashura came with mixed emotions. We learned that the culture of martyrdom in Iran is still as alive as ever. We witnessed an incredible level of faith that is possibly unmatched anywhere else on earth and we also learned about the non-Muslim Iranian culture during the ceremonies as well. Even though it was sometimes a profoundly bleak, funeral like excercise, Ashura was an eye-opener for us and we’re glad we were here to witness it.

Can you imagine hitting yourself with chains to honour a fallen hero?

How would you deal with it as a non-Muslim local? 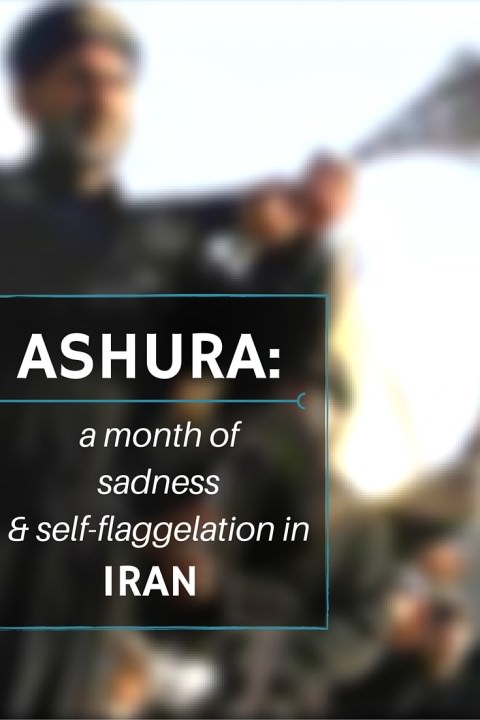