No trip to Iran would be complete without venturing off into the desert! After spending 2 nights in the Holy City of Mashhad, we were on an overnight bus bound for the desert village of Garmeh. The bus was nice, but since it’s technically winter here in Iran (even though it’s 25 degrees during the day), the locals are cold. So, the heat was blaring out of the vents the whole night. Nick was sweating, I forgot to take my motion sickness pill and trying to sleep while keeping my headscarf on proved to be quite the challenge.

Besides all of that, the bus ride was good. We arrived at a roundabout in the middle of nowhere at 5am and called our guesthouse in the desert. They sent a car to pick us up from the small village of Khur and we arrived in Garmeh 30 minutes later.

Even though it was still quite dark when we arrived, we knew we would love it there. Silhouettes of date palms surrounded the 1500 year old, mud brick village and goats and camels were right outside of our guesthouse.

The Lonely Planet says this about Garmeh:

Sounds great to us!

We opened the door to our traditional room and descended down a small flight of stairs to our bed and promptly passed out. We awoke to what looked like a completely different guesthouse in the light of day. Two Belgium guys, a Spanish couple with their baby and the Iranian family who owns the place were all chatting and enjoying breakfast.

The 300 year old home was gorgeous and made completely out of mud and bricks. The communal area had high ceilings, lovely Persian carpets, a fireplace and eating area. Wandering down narrow, low ceiling hallways brought us to the bathroom, which was clean and surprisingly modern!

The whole outside area was beautiful as well. In front of the home was a small pen, which housed the 2 camels and 20 goats that live in the village. Right beside our guesthouse was a crumbling fort, a mosque and loads of date palms. Mountains towered in the distance which made for the perfect background.

We spent the first day with the Spanish couple and their 15 month old son. The 5 of us hopped in a car and set off to see the salt flats of Garmeh – probably not nearly as impressive as the ones in Bolivia, but since we haven’t seen those yet, we thought it was pretty cool.

Alongside the dried up salt lake, there was a small, salty, very out-of-place river. The turquoise coloured water flowed over the pure white salt. It was gorgeous.

Later that evening, the 5 of us hopped in the car again and were driven through some stunning scenery to the sand dunes. Although they weren’t as impressive as the dunes in the Gobi Desert, Mongolia, they were still the perfect vantage point to watch the sun set. A herd of about 25 camels completed our desert day by strolling by right as the sun was setting.

That evening we were fortunate enough to witness the owner, Maxiar’s, musical abilities. We all sat around and were hypnotized by his “pot playing”. It was the most unusual and awesome type of music we’ve ever heard. He has very old clay pots (sort of like vases) and by banging his hands over the tops and sides and even lifting the pots up and banging them against the floor, he creates his own, original music!

It was a great end to a perfect day in the desert, but we weren’t finished with Garmeh yet, we still had one more day left. The following morning Nick and I decided to hike up one of the massive mountains that surrounded the village. Although there wasn’t any sort of path and the rocks kept breaking off as we stepped on them, we made it to the top in one piece.

The views looking over the little oasis in the desert were fantastic.

After descending the mountain, we made our way over to a little spring which, surprisingly was filled with small fish. We stuck our feet in the water and had a little fish massage/pedicure, just like we had years before in Malaysia. We met two modern, young couples at the spring and after moments, were invited to come and stay with them when we’re in Esfahan – gotta love Iran!

We thoroughly enjoyed our stay in the little desert village of Garmeh. The homemade food was so good (we ate camel meat for the first time), we were given loads of fresh pomegranates and dates from the garden, the family and friends who run the place were really kind, the desert vibe was chilled out and peaceful and of course, the on-site goats and camels were an added bonus!

After two full days amongst the swaying palm trees and silence, we were on a bus to the mud-brick village of Yazd.

Have you ever spent time in the desert? What was your experience like? Share with us below! 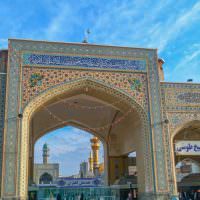 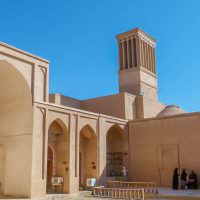 12 thoughts on “Delightful Desert Days in Garmeh – We Love Iran!”