Go To Myanmar Before It’s Too Late!

“This is Burma and it is unlike any land you know about.”

Things are changing everywhere in the world, but perhaps this global metamorphosis can be best portrayed in Myanmar, where tourists are flooding in as the travel barriers are being broken down. With every government sanction dropped comes another wave of intrepid travellers that pour in through the Yangon airport. There will come a day when the borders with Thailand open and this pristine, culture rich destination will be drowned by the tsunami of budget backpackers that will force their way up from the neighbouring kingdom.

For now, Myanmar still has it all. Stunning beaches, ancient temples, lost villages and places that are so off the map that Lonely Planet has yet to mention them. If you are an intrepid traveller that loves to feel like you’ve discovered new lands, then Myanmar is for you. But this once hidden and little visited treasure is now being discovered on a grand scale, so how long do you have? It will probably be a while before the borders open, but this hasn’t totally stopped tourism.

Since you have to book a flight from a neighbouring country, it’s only kept out those who are less adventurous or on a smaller budget. There is still a few years left for the main trail in Myanmar, but if you’re on this website which is created for those with a soul for the unknown, you won’t be staying on that trail anyway. In which case, Myanmar’s expiration date is still years and years away.

There will always be places here to unearth, where tribes and villages lost in time will be amazed to see a foreign face. In this article we’ll tell you how to get off the path and why you need to do it soon.

With the easing government regulations comes the opening of “permit zones”, where the adventurous and travellers with bigger budgets can venture off the beaten path and find themselves in the thick of the Burmese culture. For those who don’t have the budget, or the time to plan for these expensive permits, there are places you can reach that are close to the “permit zones” where you can feel that great feeling of discovery.

We would recommend that you make your way to Hsipaw in the north end of the country. Here you can ignore the tours and head out to nearby villages and find yourself in places where few other travellers have gone. From Yangon, you can head south past the gilded rock of Kayaiktiyo and find yourself amongst fishing villages where the locals will be pleased with your efforts in exploring so far south.

Go to the extremely popular Inle Lake, but don’t just stay in the northern edges of the lake, head as far south as you can. Hire a boatman who is willing to take you to the limits of the “no permit zone” and wander around villages where life hasn’t changed for centuries!

Sure there are many places in Myanmar that are “off the beaten path” but you know what?… You’re in Myanmar! You’re already somewhere that few other people go. A place so mystical that most people will be amazed when they hear that you’ve set foot on such an exotic country. Myanmar is by no means a major vacation hotspot (although it is changing) so don’t worry about being on the “tourist trail”. There are so many amazing things to see on that trail.

The mind-boggling temples of Bagan are so incredible that no number of other tourists could take away from their grandeur. They go on for so many kilometers in every direction that even with the hordes of tour buses that descend on this place every day, you can find a piece of it to yourself.

Ask the locals where there favorite spots are and you’re likely to find yourself watching the sunset next to a couple of praying Burmese devotees, rather than other travellers. Bagan is one place that you HAVE to see, and soon! The amount of people who are starting to see these temples is taking its toll on these ancient structures and the Burmese government has a habit of over-restoring their crumbling relics. Bagan will not be like this forever, so this is a major reason you must go to Myanmar now.

As the floodwaters of mass tourism rise in Myanmar, the chances of witnessing its authentic culture diminishes. For now, you can visit its temples, talk to its blissfully sheltered population and witness its time warp atmosphere. Myanmar is one of the last true travel frontiers on our planet and it is going through a major transformation as we speak. You need to pack your bags and book your ticket.

If you’ve always wanted to be able to say “I was there before all of those hotels”, now is the time to go. With jewels like Myanmar, there is a small window of time before mass tourism takes over and for this enchanting land, this time upon us.

Get out your backpacks, put on your travel hat and fly out to Myanmar. It was once known as the second most isolated country in the world, but this title will soon shift to Southeast Asia’s second most visited country. Get there before it’s too late! 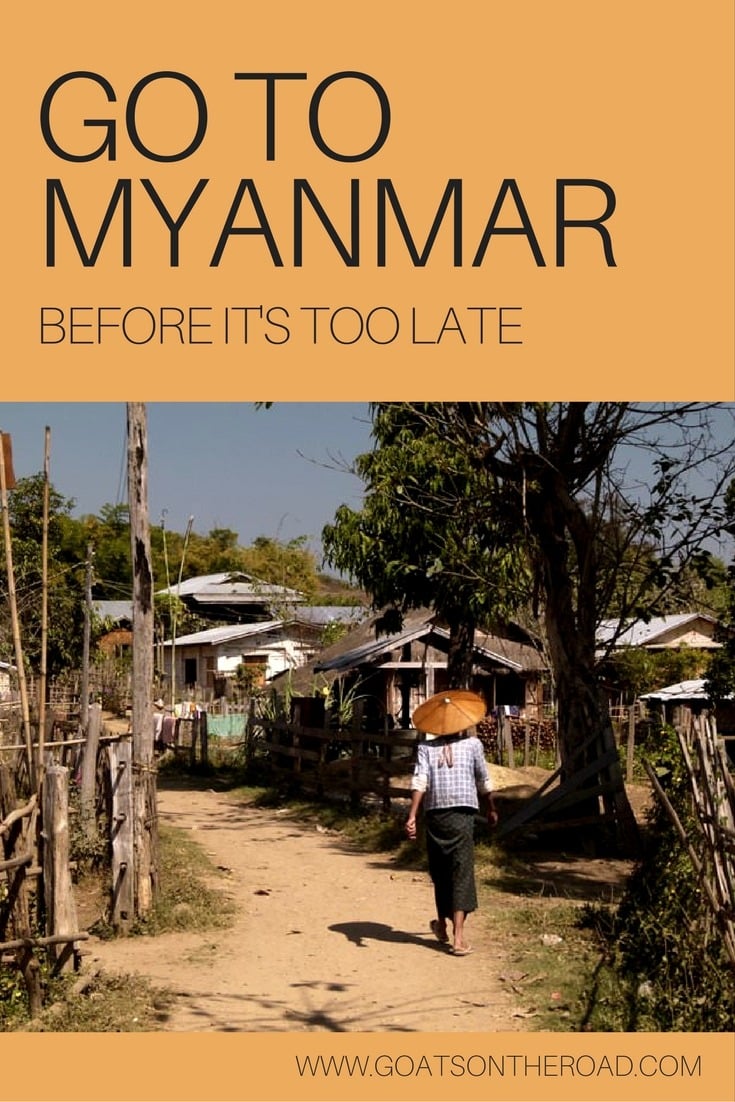 23 thoughts on “Go To Myanmar Before It’s Too Late!”