One of the many things we really wanted to do while on this trip through Central Asia was to go on a multi-day horse trek. We had trekked to high altitudes and over passes by foot and now it was time to mount a horse and let him do all the work.

We arrived in the small town of Kochkor and spoke with the friendly and helpful woman at Shepherd’s Life, a small company which helps with community based tourism. We arranged for an English-speaking guide, 3 horses, 2 nights sleeping in yurts with local families, 2 breakfasts and 2 dinners. We would trek for 2 days and 2 nights leading to our final destination of Song Kol Lake. We scoured the small village for some food for our lunches while on the trek and had a good night sleep at our homestay.

The total cost for our trip was $250 USD, including a taxi ride to the horse pickup point, and back to Kochkor from Lake Song Kol. You can contact Shepherd’s Life, or Kochkor CBT, which are both located on the main road in town.

We had a good experience with our guide, but all tours have mixed reviews online.

The following morning when we awoke, the skies were looking quite gloomy and grey. The typical looking weather for the Goats On The Road had found us again! We still decided to go ahead with the trip and set off in a car with our guide to the even smaller village of Kyzart, where we would meet our horses. During the ride out there, the sky opened up and we were completely poured on, not a good sign.

When we arrived in the village, the darkness seemed to lift and we had a patch of blue sky and sun directly above us! We loaded up our horses, Nick’s was a handsome black horse so we named him Denzel Washington and mine was a blonde/orangey coloured horse so we named him Mustard. Our guide Scott, Denzel and Mustard would be our companions for the next two nights.

We walked along through dry brush, over small creeks and towards the towering, snow-capped mountains in the distance. We loved being on our horses, it took a bit of getting used to with the saddle, the reigns and how to control the horse, but overall, they were pretty tame and listened well…until we reached our first downhill bit of the trek into the valley. Mustard was not moving. He had no desire to go downhill, maybe he was traumatized from a previous downward slope experience, I don’t know. Scott had to come up behind my horse and coerce him down the hill.

We stopped for lunch after riding for about 3 hours. The small patch of sun was still directly above us and we ate lunch near a small river. We got out our stove and pot and cooked up some instant noodles with hard-boiled eggs and cheese on the side.

As we continued trekking we could see the storm starting to totally engulf the mountains in a thick, white fog. All of the sudden, it started to hail! Our time with the sunny patch was up. We were happy we had the sun for as long as we did though and just as I was accepting the rain and was going to make the best of it, we rounded a bend in the hillside and Scott said “there, we will sleep in those yurts”. It was music to our ears.

A Kyrgyz family lives in two of the yurts and they have set up a third one for tourists to sleep in. We ran inside the family’s yurt just as the hail had turned to a complete downpour of rain. We sat near the warm stove, talked to the mother and grandmother of the family and played with two adorable little grand-daughters. The mother of the household was frantically sweeping and organizing her home, bringing in some dried dung for the fire and cooking up some freshly baked bread for us.

We enjoyed the soft, hot bread with some homemade apricot jam and butter churned fresh in the yurt. We huddled under a blanket and watched as the rain came down in sheets. We attempted to learn Scott’s complex card game with made-up rules and we taught him our traditional travel card game, shit head. We also tried some of the Kyrgyz fermented mare’s milk that the family had made…it was equally as bad as the one we tried in Mongolia!

That evening the mother cooked us a delicious spicy soup with rice and mutton, together with bread and lots of tea. We snuggled up into our sleeping bags, pulled 3 other blankets over us and promptly passed out.

The next morning I woke up at 6:30 and looked outside – it was snowing. I went back to bed, thinking we wouldn’t be moving over the pass today. But around 9:00 we all got up, had breakfast, saddled up the horses and set off. The sun had come out again and we were able to take off.

The views on the second day were otherworldly. It was nothing but blue skies ahead of us. We climbed up and up, zigging and zagging towards the 3,700m pass. Our horses huffed and puffed and skidded over the rocks and slushy snow that blanket the ground. Hawks soared high above us and the only sounds were those of our horses hooves and their breath.

We had just done a 2 day trek around Karakol and our muscles were still sore, it was nice to have the horse groaning going up the pass and not us!

The jagged peaks surrounding us were breathtaking and just when we thought it couldn’t get any better, we arrived at the top of the pass and saw the view of Song Kol Lake down below. Simply stunning.

At the top of the pass, we met a man on horseback carrying a rifle who told us a pack of wolves had killed one of his horses and he was now on the hunt for the murderous predators. Because of the snow in the lower lying mountains, the wolves can hunt under the white camouflage and therefore, they become braver. They leave the high peaks of the hills they usually roam and make their way down to the valley in search of livestock to feed on.

After our chat with the hunter, we made our descent into the valley below. Again, Mustard wasn’t too happy about going downhill, but this time I could sympathize with him. The ground was muddy, wet and slushy. The horses had a tough time going down the mountain, slipping and sliding the whole way. So, to make it easier for my horse, I got off and walked with him instead. After a minute, he stopped, laid down and started rolling around in the mud, covering my saddle and blanket with dirt.

It was official, he didn’t want me riding him!

After awhile I attempted to get back on, and again he didn’t want to move. Scott and Nick whipped him in the butt and he finally set off. We came to a muddy hill where I just knew Mustard couldn’t handle it. His legs buckled underneath him and he fell on his side into the hill. Luckily I had been planning my course of action in case this happened. I whipped my left leg out as soon as I felt Mustard waver so it wouldn’t get crushed between him and the hill, dropped my hands to the ground and just kind of rolled off.

Mustard and I both laid against the mountain for a few moments before getting up. For the next couple of hours, I walked him. We were definitely not getting along anymore. I think I gave him too much leeway at the beginning and he knew he could get what he wanted!

After riding for about 3 hours, we reached the end of the valley and arrived on the shores of glistening Lake Song Kol. The sun was sparkling on the water, the ground we were walking on was finally dry and the towering snowy mountains as a backdrop were the icing on the cake.

The final 2 hour trek to our yurt stay was gorgeous and when we arrived we didn’t want to leave. We wandered along the lakeshore and couldn’t help but gaze in awe of the mountains surrounding us. Having the mix of snow and sun against the blue lake and our white yurt was truly magical.

We enjoyed our final evening playing cards with Scott, drinking some beers and devouring a home cooked meal. Scott was an excellent guide and our first horse trekking experience was one to remember.

Located just a 45 minute drive from Karakol is the Village of Jyrgalan. In June, 2017, we marked out the new Keskenkija Trail which can be done on foot, or horse. There are also many other day, or multi-day horse treks in the area. Contact Destination Jyrgalan at: [email protected] for more information. Or, send us an email and we’ll be happy to help!

Have you ever been horse trekking? What was your experience like? Tell us about it below! 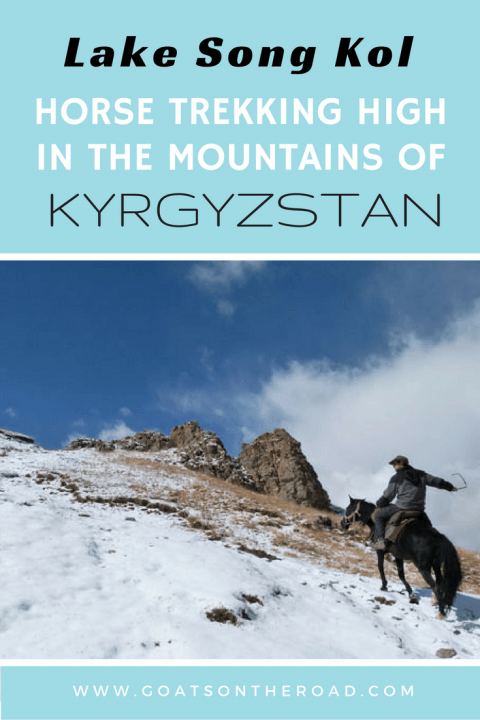 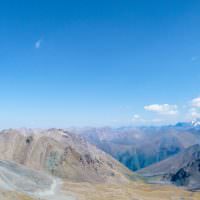 A Hike To Remember: Trekking To Ala-Kul & Altyn Arashan in Kyrgyzstan

22 thoughts on “Lake Song Kol: Horse Trekking High In The Mountains Of Kyrgyzstan”