When our trip through Central Asia was coming to an end, we started thinking about the 2.5 month gap we had between being in Canada for Christmas and our pet-sitting job in Grenada. We both agreed that our recent trip through one of the least touristy regions in the world was not only adventurous and exciting, but at times, exhausting.

So, we decided that we would spend the 2.5 months staying put in one place. That place was going to be Merida, the lovely colonial capital city of the Yucatan State…

What actually happened was that we arrived in Canada and started reading about all of the amazing places in the Yucatan Peninsula. How could we go to Mexico and only see one city? Our interest in this southern country was piqued.

It may not have been two-and-a-half months as originally planned, but we did visit Merida, for 8 wonderful days, and it turned out to be one of the best places to visit in Mexico.

Towering at 42 meters high and dating from 1598, this is the oldest cathedral in the Americas! This is the site of a previous Mayan Temple, which was torn down by the Spanish in order to build this Cathedral. The interior, although lovely, was stripped by peasants during the Mexican Revolution and therefore is quite bare. Make sure to have a look during the day, but also at night when the Cathedral is beautifully illuminated. 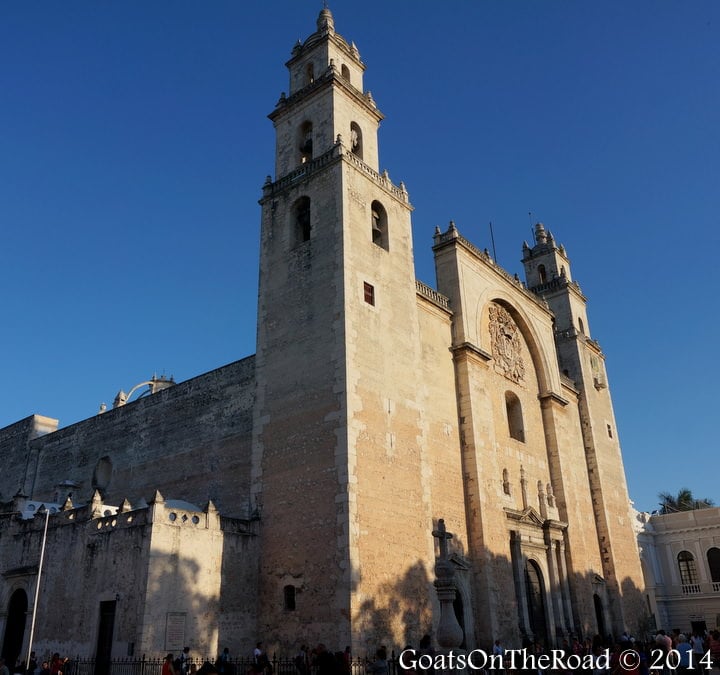 Although this building houses the offices of the State’s Executive Government Tourism Board, this is not a typical Government office. Adorning the walls of this green coloured building are massive murals painted by local artist Fernando Castro Pacheco. His paintings took 25 years to complete and each one portrays a period in Mexico’s history, including the interaction between the Mayans and the Spaniards. 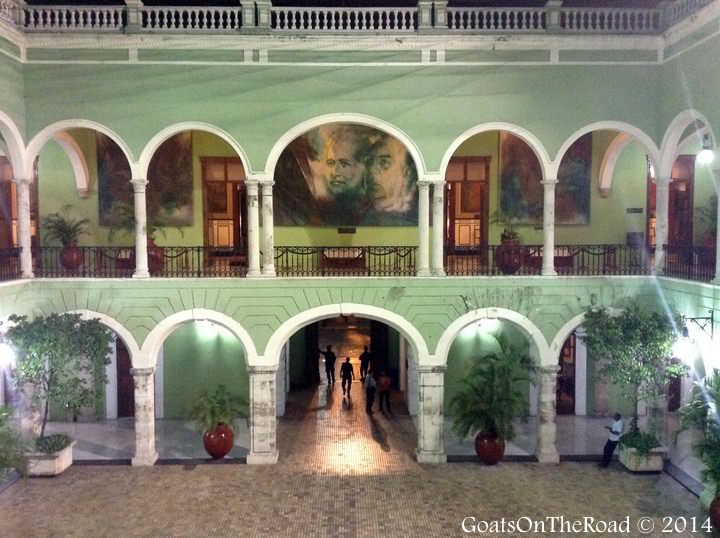 The artwork at the Placio del Gobierno is stunning

This theater was the first built in Merida and is said to be one of the most important in all of Mexico. If you’re not a fan of ballet, opera or symphonies, just go and have a look inside. The architecture here is gorgeous and with an audience capacity of 700, it’s definitely a site to see. 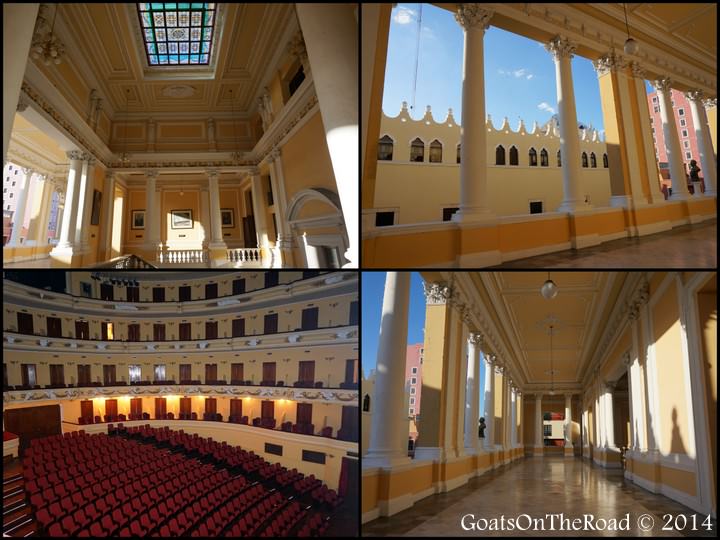 Dinner & Live Music on the Street

On Thursdays to Sundays from 9:00pm to 2:00am, Calle 60 up to 55 are closed off to traffic. These 5 blocks become wonderfully void of cars and pedestrians can stroll around peacefully looking at the churches, squares and other sights. During this time, many restaurants and bars put their tables and chairs out on the streets and some have live music playing. A must-do while in Merida! 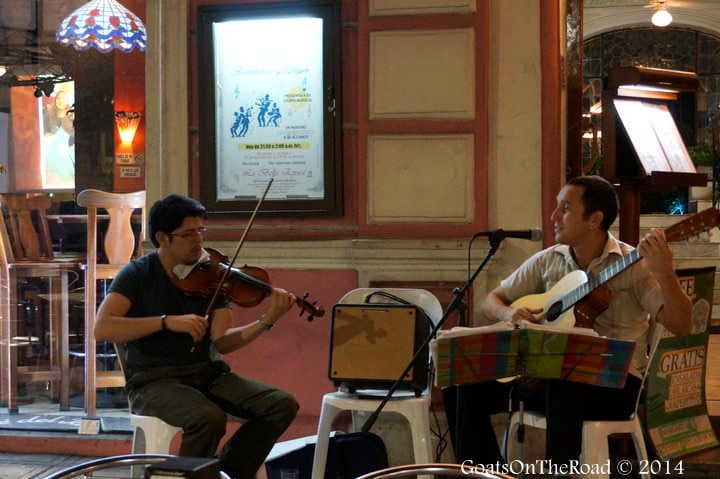 Enjoying dinner on the street while listening to live music is a must!

The Yellow City of Izamal

This colourful city is only about 70 km from Merida and is a great place to visit for a couple of hours. As you probably guessed, most of the buildings here are painted yellow! It’s also known as the City of Hills, but in reality, the hills are actually piles of rubble left over from the ancient Mayan Temples that used to stand here.

Clamber up to the top of places like Kinich Kokmo for great views over the city. Make sure to visit the Izamal Convent and eat at Kinich El Sabor de Izamal, a great restaurant serving traditional dishes from the Yucatan.

The Beach Town of Progreso

There’s no better place to escape Merida’s relentless heat and noise. Located on the Gulf of Mexico, this fishing town is only 30 minutes from Merida! There are local buses going to and from here all day, for only 12 pesos/person/per way. After strolling down the promenade, grab a lounge chair at one of the many beach-side bars and enjoy the perfect views of the water…with a margarita in hand. 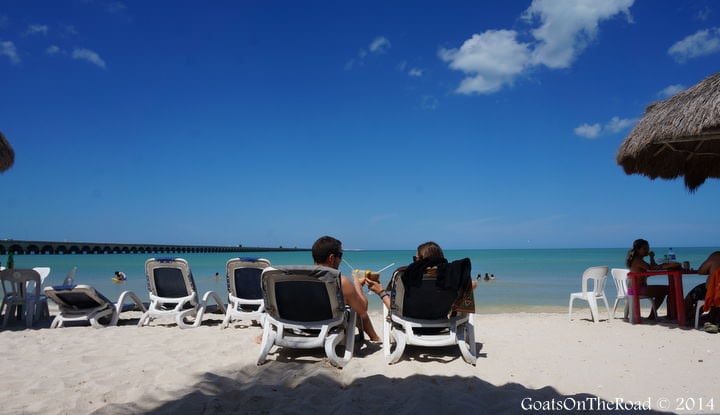 A great place to escape the city heat

The Unesco World Heritage Site of Uxmal is in immaculate condition. The ruins here are unique compared to the other Mayan sites in Mexico. This architecture is Puuc Style, with rounded edges as opposed to square, smooth low walls and many masks of the Rain God, Chaac, carved out of stone. 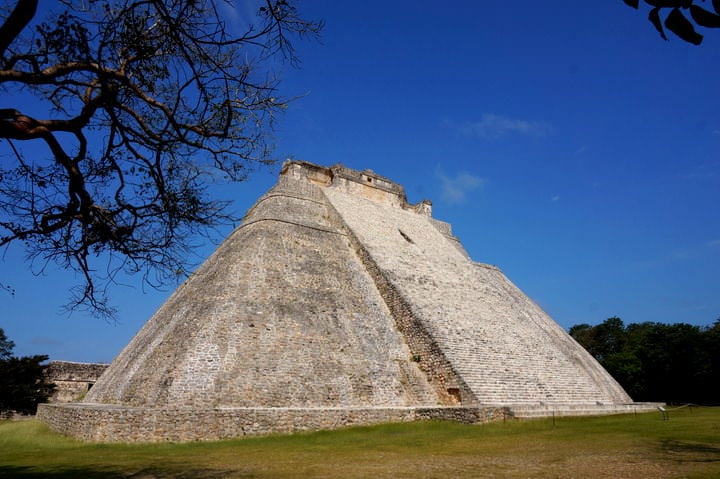 Wonder Of The World: Chichen Itza

Dominating the center of the ancient Mayan City of Chichen Itza, stands the 30m high El Castillo Pyramid, which is the actual Wonder of the World. Even though this is a Wonder, we personally think that the ruins at Uxmal were equally, if not more, impressive! Make sure to get here early to avoid the swarms of tourists that descend on this site daily and also the relentless heat! The site is open from 9:00am to 5:00pm, the entrance fee is 204 pesos for foreigners. 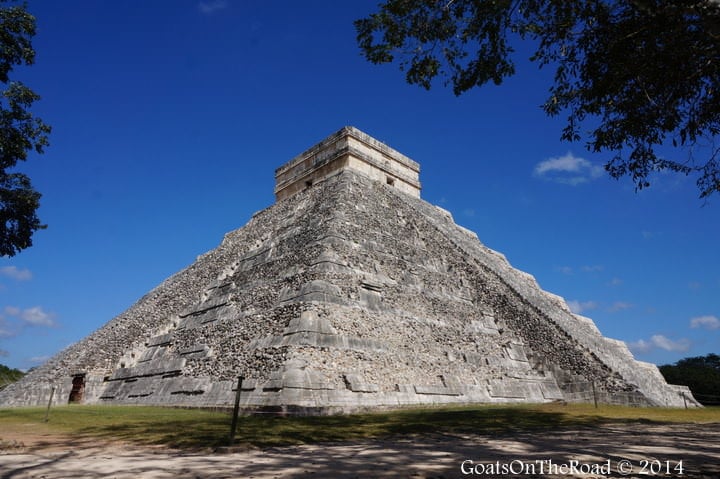 The towering Kukulkan Pyramid at Chichen Itza, a Wonder of the World!

Nestled far away from the busy roads of Mexico stands these off-the-beaten-path ruins. This isn’t your typical Mayan city and it’s special for many different reasons. The main temple here is called the Temple of The Seven Dolls, due to the 7 small, stone carved dolls found at this site during excavation.

During the spring and autumn equinox, the sun shines perfectly through the doorways of the temple. The beams of light used to represent the beginning and ending of the harvest season for the Mayan people. Yet another testament to both their ingenuity and their knowledge of seasonal change. 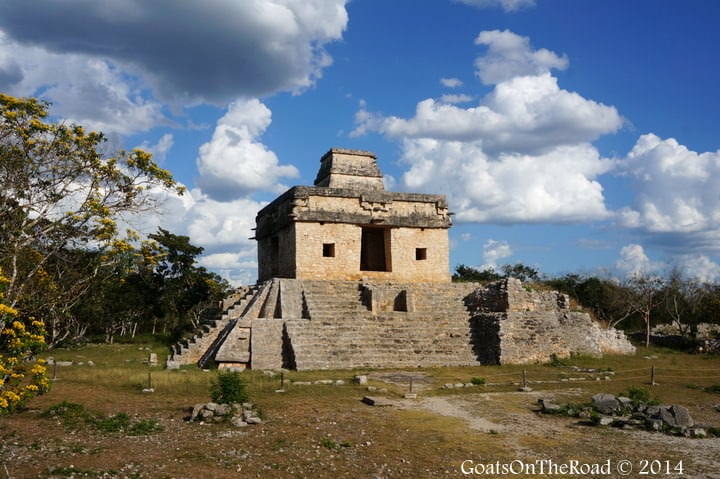 Temple of the Seven Dolls

Another interesting feature of Dzibilchaltun is the Spanish Franciscan Church, which the Spaniards built in the 1600’s. This was the first time we’d seen Mayan architecture co-existing with Spanish structures. There’s also a lovely cenote here that is great for swimming. Not only is it beautiful, but when the cenote was first explored in 1957, urns, wood, pottery shards and human bones were found in the water! 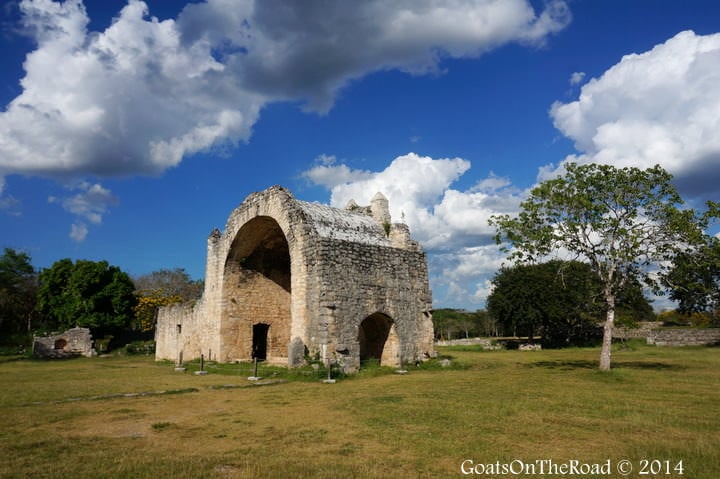 If you’re backpacking Mexico, we suggest pulling yourself away from the stunning white sand beaches of the Riviera Maya for a few days. There are many amazing things to see inland and those who make the effort to venture away from the water won’t be disappointed!

Have a look at our quick video showcasing the sights around Merida! 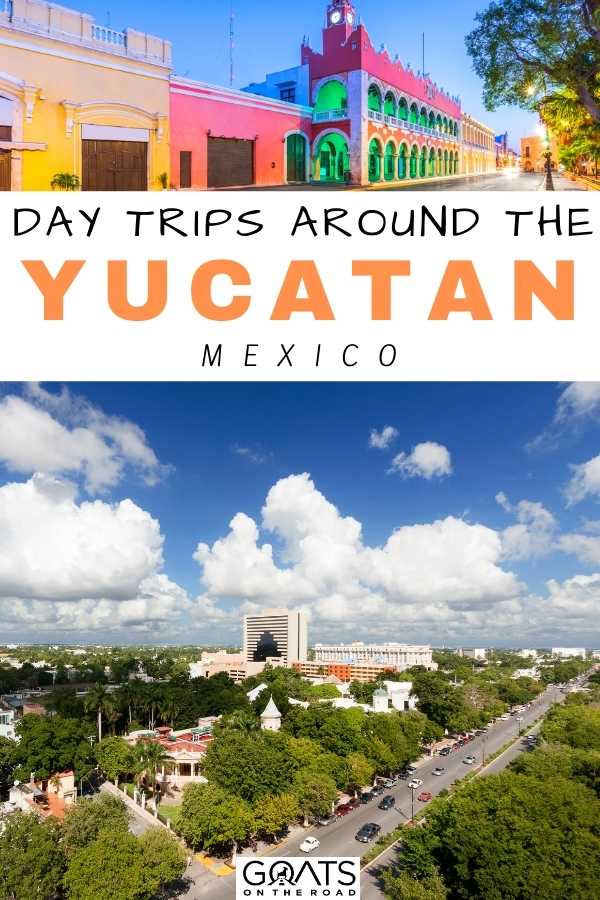 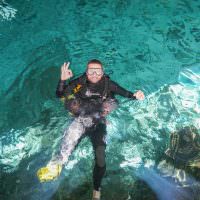 Submerging Into Cenotes: A Cave Dive In Mexico 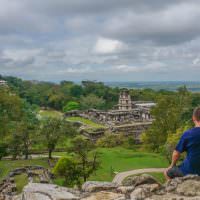 12 thoughts on “Merida, Mexico: The Perfect Base for Day Trips Around the Yucatan (With Video)”