“You’ve travelled the world for 5 years, you must speak at least two languages, right?”

“You guys lived in China, you must be able to speak quite a bit of Mandarin.”

“You’re from Canada, so you obviously speak French and English.”

People often assume that just because we’ve travelled a lot and lived in a few different countries that we must speak more than just our native tongue. These are both legitimate, and annoying assumptions!

It’s not annoying that people ask us or think that we speak two languages, it’s just that we’re frustrated and disappointed with ourselves that we haven’t yet been able to become fluid (let alone fluent) in another language. People from Europe can usually speak a minimum of 2 languages, most speak many more, but people who are native English speakers tend to only speak English, what’s up with that?!

To be fair, yes we are from Canada, but most people who speak French are from the east, and we grew up in the west, the very west. I took French classes throughout high school, but since no one around me (for about 4,300 kms) spoke any French, I didn’t exactly have anyone to practice with, and therefore, forgot most of it.

Nick took Japanese in high school, but let’s be honest, he just did it because not much is expected of you if you decide to learn such a hard language – I’m not being mean, he told me that’s why he chose Japanese!

When we lived in China for a year teaching English, we did learn some Mandarin. We could go to a restaurant and take a taxi, but that’s about it. The Chinese languages are one of the top 4 hardest to learn for native English speakers, so we don’t feel too badly about not being able to speak more.

We then travelled to Mexico, Guatemala and Cuba, where they speak Spanish. When we arrived in San Pancho on the west coast of Mexico, we decided to take Spanish lessons! We were good scholars and learned a lot actually, but (here comes another excuse), since we were in a very popular tourist destination, the Mexican people spoke English. We used our Spanish throughout the rest of our time backpacking in Mexico, but felt like our level 1 abilities couldn’t get us very far and we were better off speaking English.

Living on Lake Atitlan in Guatemala was fabulous. We loved the seclusion, the peace & quiet, the stunning vistas and our friendly French neighbours, but due to the isolation, we didn’t find ourselves interacting all that much with Guatemalans. When we would visit the “big” village of Panajachel, we would use our Spanish abilities at the shops, but that was only once a week.

We did OK communicating in Cuba, and many of our casa particular owners didn’t speak any English, so that was a great way for us to practice. But even then, Cuban Spanish is much different from the rest of Latin America!

We’re tired of only being able to converse in one language, and while we were travelling in Cuba, we decided that when we got to Grenada, we’d learn Spanish online. The only issue is that Grenada’s official language is English, although in reality, it’s a heavily accented Caribbean version of English 🙂 This will make practicing Spanish a bit difficult, but that’s OK.

When we arrived in Grenada a month ago, we were contacted by Spanish Marks (how perfect is that?!), who saw that we had lived in Guatemala, where the school is, and knew how much we loved it there. This school is based in the city of Quetzaltenango, a place we really wanted to visit, but just didn’t have the chance to.

We came up with a plan for Nick and I to take Spanish lessons with the head teacher, Sandy, who has 10 years experience in teaching Primary to University levels.

Guatemala is the place to go if you want to learn the Spanish language. Many people go to this Central American country specifically with that goal in mind. But, what’s great about learning online, is that we don’t even need to fly to Guatemala, we can learn from the comfort of our own home in The Caribbean, Europe, North America or wherever we travel to.

Rustom, who is the co-founder of Spanish Marks, is from England and after a voluntary position at a NGO in Guatemala, he was hooked on the country! From the warmth of its people to its diverse landscape of volcanoes, Mayan ruins and unspoilt beaches, he loved it all.

Together with Sandy, this ethical online school was born!

A School That Gives Back

We’re all about supporting tour agencies, hotels and small businesses that give back to the communities that they’re a part of.

Approximately 51% of Guatemalans live in rural areas, and despite agriculture being the backbone of the country’s economy, poverty is especially endemic in these areas. Rural communities have traditionally been excluded from Guatemala’s social and economic mainstream, meaning they suffer disproportionately high levels of poverty.

The situation is made even worse by corruption, a lack of educational resources and the after-effects of a 36 year civil war.

In order to help the people in and around Quetzaltenango, Spanish Marks supports and donates a portion of their profits to the local charity, Asociación Fatima. This association provides food, medical supplies, school equipment and shoes for around 250 families in the area.

Our Spanish lessons are from Monday to Friday, 50 minutes each day. On top of that, we are supposed to study and do our homework before every class.

All we have to do is login to our account on the website, press “join class” and after a few moments, Sandy’s smiling face pops up, as does a chat box and a whiteboard! It’s sort of like Skype in that we can all see and hear each other, and we can type a sentence or a question in the chat box if we need to.

The text books and materials are all on the screen for us to see, and there’s a “whiteboard” as well, where the three of us can interact. It’s a pretty cool set-up actually. Sometimes we reply to questions verbally, while other times we are able to learn by typing the answers out for Sandy to review. All we need to learn online are some earphones and our laptops, as the webcam and mic are already built into our computers.

You can either learn 1-on-1 with the teacher, or in a group of no more than 3 other students. Spanish Marks gives a free trial class to see if you like it, and to figure out which level you would be at: beginner, intermediate or advanced.

Lessons are available 7 days a week, 24 hours / day! So, just pick a time that works best for you.

We can honestly say that this is a really great program. We love being able to sit in our living room, in our pajamas, with a cup of coffee and not have to go to an actual school!

Sandy is an excellent teacher and she explains things very well. If we have questions, she’s able to answer them. If we’re feeling sluggish, she’s there to encourage us. Sandy speaks slow enough for us to understand what she’s saying, and uses a mix of English and Spanish to explain the instructions to us, which is great for learning.

The class time of 50 minutes is a little bit short, but then again, we’re meant to do more studying and practicing with each other at home, so in reality, we spend about 2 hours each day practicing our Spanish and if we really wanted to, we could do back-to-back classes.

We also feel that we would benefit more from the class if there were more written exercises for homework, and if the online homework included the answers, so that we could test each other and make sure we’re studying the proper language and sentence structures.

In our opinion from our first three week’s with the program, we can honestly recommend Spanish Marks as a great way to learn Spanish online. Now all we have to do is travel to a Spanish-speaking country so we can practice all that we’ve learned! 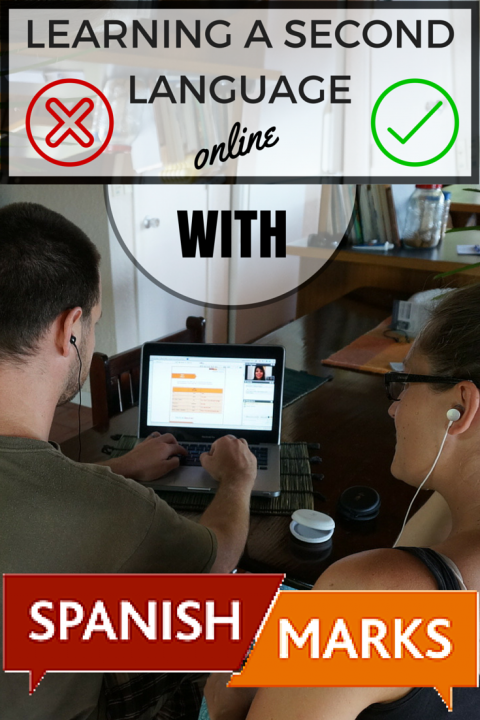 A special thanks to Sandy and Rustom for providing us with excellent lessons! We’ve really been enjoying our classes and will be recommending Spanish Marks 🙂 As always, all thoughts, opinions and reviews remain our own, despite any complimentary services received.

Accommodation can take up a large section of your travel budget and sometimes it’s the biggest cost of your trip. Learn how to receive free accommodation with the tips in this article. Staying in cheap places can stretch your budget a little further, but when you need to pay for a roof over your head ...
January 26, 2023
By:
Layla Turner

There are many factors that play a part in finding the perfect beach. To some, this may mean turquoise waters with snow-like sand, while for others, the most epic beaches may be secluded and have a rocky coastline, with pebbles in the water. Some prefer beach bars and music, while others like peace & quiet. To ...
January 26, 2023
By:
Dariece Swift
About
Contact Us
Work With Us
Start Here
Start a Blog
Privacy