We flew out of Donsol back to Manila and we were lucky once again. Many flights had been cancelled in the past few days due to the weather, but the clouds cleared the day we left (go figure) and we flew out of Donsol under the only sunshine we had seen in 8 days. We were even able to see a massive volcano that loomed over the town; if it hadn’t cleared up on our last day we wouldn’t have even known that it existed.

The brief showing of the sun gave us new hope for good weather to enjoy the Philippines beaches, but those hopes were soon shattered when we landed in Manila. Again the rain held off just long enough for us to get our bags, then shortly after checking into our hotel the water returned and flooded all of the streets in the Ermita area of downtown Manila.

Cars were driving through a foot of water leaving wakes behind them that you could ski on. Again we had to retreat to a little cafe where we worked on our website and checked the weather forecast for our next destination, Palawan Island. To our despair, every weather network website we checked showed the same grim result, rain and thunder showers for at least 10 days all over the Philippines.

At this point we honestly considered booking a flight out of the country. We had already been completely repressed for 8 days by the relentless weather and just couldn’t see living through another 10 days of this soaking existence. To make matters worse, we had given our laundry in Donsol and because they don’t have dryers, the clothes were hung outside under an awning and had remained damp for 5 days leaving them rank and mouldy. So, we’re sitting in this cafe (again) wet and smelling like mould, looking at the forecast for another week and a half of the same.

Usually weather is weather and it clears up once in a while but this freak summer storm hadn’t cleared for more than an hour or two in the past week and showed no signs of clearing in the future, so we were at a travel low. We checked flights out of the country but they were just too expensive to book last-minute, so we decided to head to Palawan and hope for the best.

Again we were lucky leaving Manila, the weather cleared for a half an hour and our plane took off on schedule, but landing in Palawan we were welcomed by the familiar sound of thunder and rain. We checked into our hotel In Puerto Princesa, the capital of Palawan, and braved the rain to go out for dinner. We ate our Chow King Chinese food dinner, soaked to the bone, still smelling like dead cats, and ended up just having a bit of a laugh.

Nothing has gone quite right in the Philippines and we don’t know why, it all started when we realized that we booked our trip here during the busiest season of the year, Easter, which forced us to reserve flights and rooms weeks in advance. This pre-booking is way out of our comfort zone and ended up causing some serious problems on the way. Having to cancel bookings and re-book them, missing some important bus lags and enduring a visa extension fiasco which kept us in miserable manila for 5 days. All of this was done under the constant downpour of a Filipino typhoon, we had nothing left to do but laugh. We decided that tomorrow was going to be sunny, we would clean some of our dank clothing and try to start anew.

So sure enough, the next morning was sunny and 35 degrees, so hot in fact that we were tempted to complain about the repressive heat, but we kept those thoughts inside, just happy that we were finally seeing some sunshine in the Philippines. We walked around town and checked out a few sights including the massive Imaculate Conception Cathedral and a very busy local market selling everything from pigs heads to wooden souvenirs. We hit up the local grocery store for some amazingly well-priced Californian red wine and planned our journey onward to Port Barton, a lovely beach town on the west coast of Palawan Island. 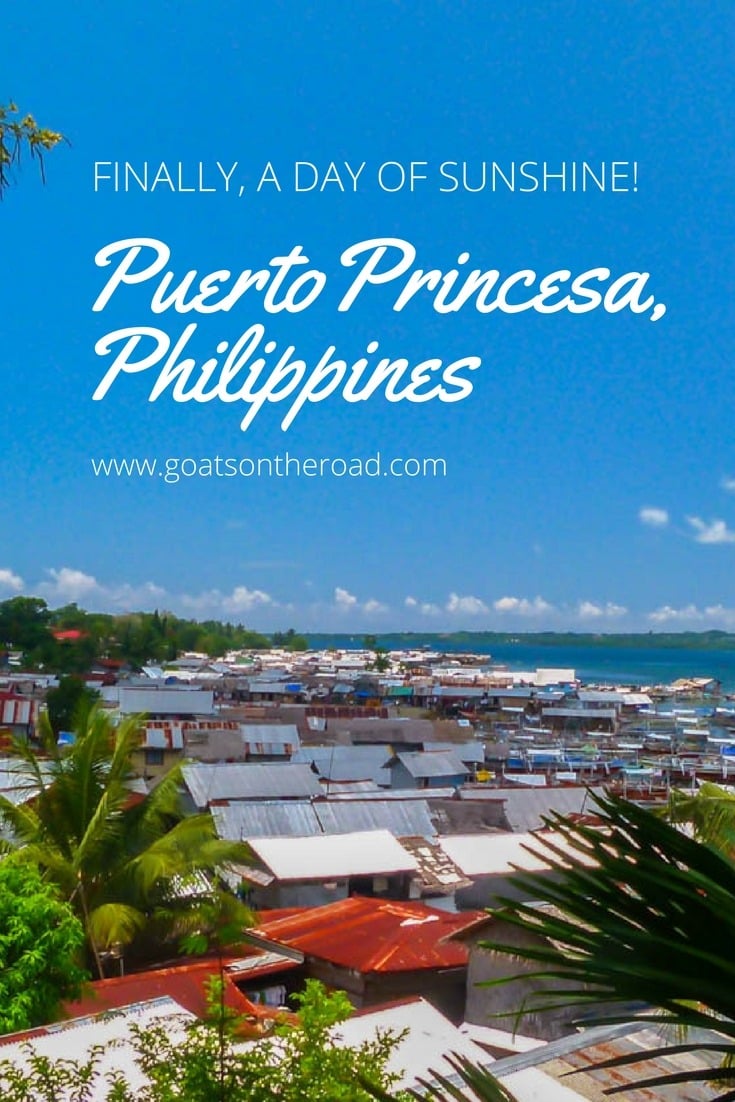 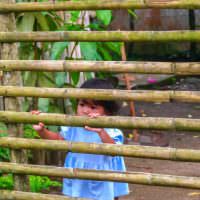 Donsol, Philippines – Soaked and Sad to Miss The Whale Sharks 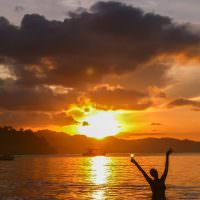 2 thoughts on “Puerto Princesa, Philippines – Finally, a Day Of Sunshine!”