We were so excited to have reached the Quirimbas Archipelago! The first couple of days on Ibo Island were spent enjoying the very old, very beautiful village. In the main part of the old town was a broad, dusty, tree lined promenade with 400 year old wells where the locals would gather to collect their water for the day before hoisting bucket fulls on their heads and carrying it home.

There were no vehicles on the island, just a few goats on the road and there was a mix of African and Portuguese influence. What the Portuguese had left to crumble in the 18th century hadn’t changed much, and where they had left their widely spaced homes, the African people had taken them over and added a few African style huts in the spaces, making the whole village look medieval, spiced up with a palpable African flare.

Wandering around the dusty town under the shade of the giant fig and palm trees, we were followed by hoards of inquisitive kids yelling “Hello Mazungu!!” We walked by women cracking open coconuts, young kids crushing curry in a giant pestle and mortar, families doing their laundry, and of course all of this was occasionally accompanied by the echo of acapella harmonics, sung in perfect unison by groups of women in different huts and houses.

By the 3rd day, we were ready to see another island in the Archipelago. We decided to pay a local kid to take us to the neighbouring island of Quirimba. We contemplated attempting the walk ourselves between the islands at low tide, but as we all trudged through the knee high tide water, through the labyrinth of mangrove forest, it became evident that a guide was a good investment.

After a 2 hour hike through some of the strangest terrain we’ve ever transversed, we arrived at the beach of Quirimba. Only the tide has such a powerful effect on the shallow seas, that all we could see was blinding white sand for miles into the horizon. The seemingly endless panoramas of gleaming beach looked like giant salt flats and was peppered with beautiful shells. The lack of tourists and general traffic on the islands means that the shells never get crushed or taken, so everywhere we looked was perfectly unbroken shells.

When we finally arrived on the island itself it felt like we were the first explorers to find a lost island inhabited by friendly locals. We walked through the village as dozens of village children followed us in a wake of whispers and laughter. As we passed a new home (mud hut with a grass roof) a new kid would yell “Mazungu” and join the expanding entourage behind us.

When we had accumulated nearly 30 kids we started yelling and chasing them around the village to a chorus of screams and adorable laughter. Some of them thought of it as a funny game, while others, often younger, were terrified of the strange looking white person running after them. Some of the kids would let out a blood curdling scream and start crying because they had never seen a Mazungu before and clearly thought we were intimidating.

This deep seeded fear in the kids made their mothers laugh hysterically. The big mamas would then grab their petrified child and hold them up to us while the poor kid would squirm and cry in their arms. This proved to be a source of endless entertainment for the mothers around the island and as we walked we would hear the cries and laughter in equal measure.

We ended up stumbling into a market where they had some fresh coconuts for sale. The four of us bought a coconut each and sat on a stoop at one of the houses and desperately tried to open the fruit. The crowd of villagers thickened around us, as did the sound of their giggles, as the 4 tourists tried to crack into their coconuts. Eventually we opened them and drank the sweet milk that the nut had guarded so well.

Within minutes the villagers were pointing and poking at Henry’s ukulele, explaining in charades that they wanted him to play. The second his hands started strumming the catchy tropical tunes, the crowd of 50 Africans doubled and everyone, including us, began dancing in the middle of the dusty village.

We formed a circle and each person took turns doing their own move in the center. Everyone from the older mamas to the 5 year old kids took their turn dancing amidst the crowd. One boy, not 7 years old, had some of the best moves I’d ever seen. He was a regular Michael Jackson, destined for fame if he could only find his way to a city from this deserted Mozambican Island.

The four of us, dancing and singing the afternoon away, surrounded by dozens of local villagers, on an island lost in time, bobbing seemingly unseen in the Indian Ocean, is yet another memory now etched into the fibers of my will to continue travelling.

Every hour for 4 days of gruelling African bus rides, became worth it the minute Henry picked up his ukulele and played us a soundtrack to this paradise life we have all chosen. These unexplainable moments, this feeling of discovery and connection with people so foreign to us, is yet another testament to why we are out here. A life lived abroad is so rich with these experiences that a routine at home only seems to douse the flame of our ambition. These experiences will keep me on the road until I feel like I’ve seen the world. And these experiences did not stop here on this day.

As we finished dancing and singing with our hundred or so new friends we took one picture of everyone, then made our way to the beach, still trailing a few curious kids. We went for a swim and then came out and played a bit with the kids. We taught them some drum beats with our hands.

The rhythmic tapping attracted a couple of local woman around our age. They saw Dariece dancing and asked, in charades, if they could join her. Before we knew it we were all drumming a beat, while Dariece and a complete stranger from a nearby village were dancing in front of us.

Dariece would watch the woman’s moves and vice-versa until it was a mix of North American and African movements. It all finished with a big laugh and hug between Dariece and her new dancing partner. Not ten minutes later a group of 3 other women came by and asked Dariece if they could braid her hair.

It’s so nice when Dariece gets a chance to connect with the local women because in other cultures they are usually very shy. It’s always me meeting men, who find it disrespectful to speak with (or even make eye contact with) my “wife”.

But in Africa, women are complete equals (in that respect), and seem to have no problem striking up conversation, or speaking their mind. Unfortunately Dariece doesn’t speak “Monee” the local language, and they didn’t speak English, so she just sat there as the smiling girl carefully braided her hair.

It was getting late by the time we hired a fishing boat to take us back to Ibo Island. Once again, we boarded the over loaded boat just as the sun was setting on the horizon. We sailed into the night until we were navigating the thick mangroves by moonlight.

A couple of times during the 2 hour trip we got stuck and thought we may be sleeping in the mangroves, lost between two islands, but the skilled captains found their way to the shores of Ibo in the darkness. When we got back to The African Pot, we told Stephane all about our day and then enjoyed a delicious dinner of garlic, lemon, basil fish and ginger crabs. A perfect end to a perfect day in the Quirimbas Archipelago. 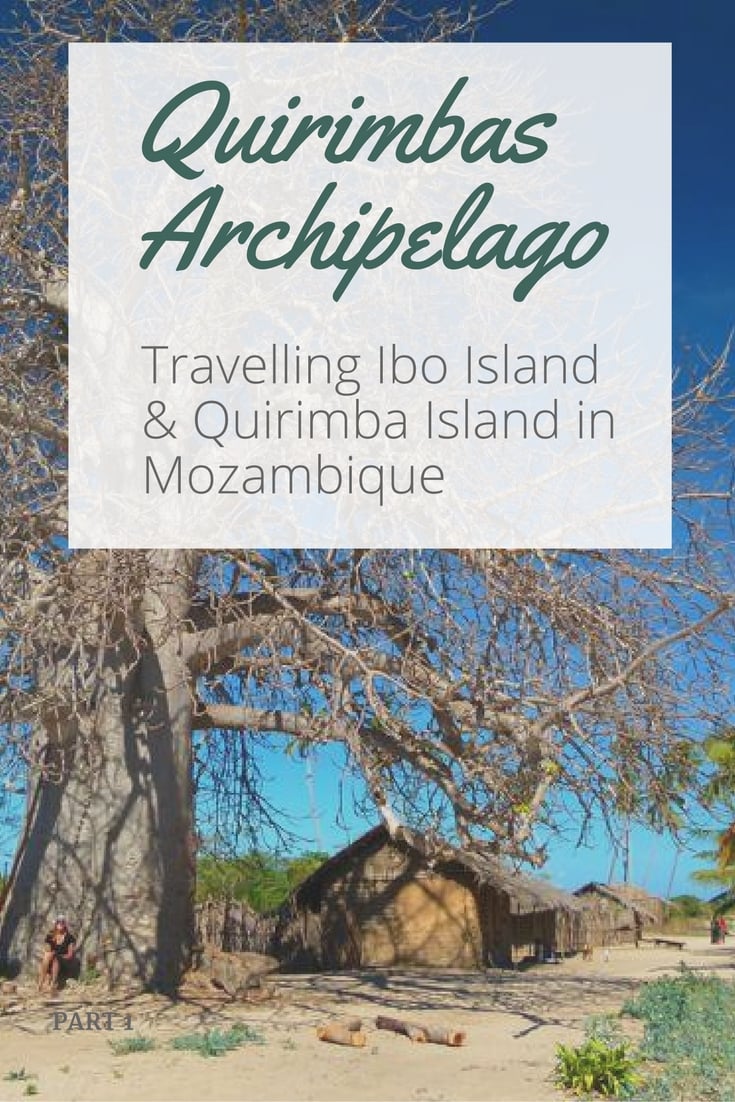 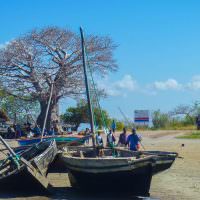 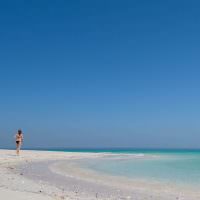