Shiraz is one of the most famous cities in all of Iran. Before the Revolution of 1979, people here sipped on fine Shiraz wines, recited poetry from the famous poet, Hafiz, explored the arts freely and enjoyed a more western way of life. Nowadays, the vineyards growing the famous Shiraz grapes have been destroyed. Hafiz poetry is restricted to private settings and drawing, music and dancing are practically non-existent…

All of this is what you’re meant to think of Shiraz. However, we went there and had a totally different experience! We somehow managed to enjoy this previously liberal city the way it’s supposed to be experienced – freely, openly and relaxed.

We checked into the nicest hotel we’ve ever stayed at, Hotel Niayesh. The different styled rooms in this traditional home, turned hotel, are set around a huge, beautiful courtyard. Our room was awesome. It had a king sized bed, lots of traditional furniture, clean bathroom, fridge and tv. The best part was the 3 double, stained glass doors that opened up to the courtyard. It was stunning.

We had just come from Yazd where we spent 5 nights and figured we’d continue with the theme of slow travel. We ended up staying in Shiraz for 6 nights and loved every minute of it. We wandered around the old town, stopping in at various mosques and mausoleums. We strolled through the ancient bazaar with its fabulous vaulted ceilings and peered into the many shops.

The best sight of all in Shiraz was the massive Ali Ibn Hamza Shrine with its interior of glistening mirrored walls and ceilings. (no photos were allowed inside)

After seeing many of the main sights in Shiraz, Nick and I decided to head to one of the Unesco Gardens for a day of relaxation, which turned out to be one of the most memorable days in Iran so far. As we were sitting there reading our guidebook, a timid woman and her boyfriend came by. They looked at us, whispered to each other, then looked back at us again and said “Hello”. That’s all it took. The four of us hung out for the rest of the day and into the early evening.

***Note: I’ve chosen to protect the identities of our new friends, by changing their names and not adding any photos.***

Our new friends, Paris and Sam, became our companions and tour guides for the day. Paris’s English was flawless and she even had a North American accent. Sam was well spoken also. They first took us to the tomb of Hafiz. Usually there would be joyful music playing in celebration of the great poet, but because of Ashura, the months of mourning for Muslims, it was silent. Our new friends weren’t happy about this.

“We have come into this exquisite world to experience ever and ever more deeply our divine courage, freedom and light!”

Even though it’s the law for women to wear a headscarf in Iran, Paris’s headscarf was slipping further and further back on her head throughout the day. Sometimes, it was completely off of her head. She didn’t care though. She’s not Muslim, why should she? Boundaries were being pushed.

We went to the park later that day and there was a young man playing the guitar with a group of people standing around enjoying the music. “Wow, he’s brave playing music during Ashura. He could get arrested for that if anyone complained” said our new friends. Again, the boundaries were being pushed in this Islamic world.

From there, they took us out for a delicious lunch, we wandered around some more, ate ice cream and then they invited us back to their house.

The most amazing thing to me was that as soon as we entered into their home, the headscarves came off, hair was let down and the clothing worn at home was the same as we would wear in the west. Tight jeans, sleeveless shirts and fashionable sweaters replaced long, loose coats and shirts. The four of us (plus the spunky younger sister who came barreling down the stairs to meet the Canadians) enjoyed an evening of how I imagined it used to be back in the good ‘ol days. We spoke freely about politics, religion, literature, art, movies and travel. The couple recited poetry from a book of Hafiz poems. (debatably more people in Iran have this book than the Quran)

“Time is a factory where everyone slaves away earning enough love to break their own chains.”

One of the other laws in Iran is that drinking alcohol is forbidden for Muslims. Christians and people from other religions must drink in the privacy of their home and not sell any wine or alcohol that they have made. Lucky for us, our friends had some Shiraz wine. Drinking Shiraz in Shiraz was something we really hoped to do.

We learned that our new friends are not religious and they shared their views on what living in an Islamic State is like for them. We chatted about how they have to deal with the call to prayer, how they have to be covered up, how music and joy ceases to exist for 2 months during Ashura and how their grandmother would encourage them to wear a piece of colourful clothing each day – never all black like many of the Muslims choose to wear in Iran. It was eye-opening and fascinating.

Except for being invited in for tea, this was our first real interaction with the people of Iran. We had a wonderful day and evening with our three new friends. We said our goodbye’s around 9:00pm and made our way back to our hotel.

On November 19th, we celebrated Nick’s birthday! He’s had many birthdays on the road (Thailand, India, Nepal and China) all of which have been special for different reasons. I tried my best to make this one fun for him and in the end, it turned out pretty good. We met some tourists from Australia, Spain and Bahrain that day at the hotel and 6 of us enjoyed an evening of hookah pipe, chocolate milkshakes and I was able to rustle up a chocolate cake with candles for Nick as well. He was even given some flowers from the awesome staff members at the hotel.

Just as we thought the evening couldn’t have been better, the Aussie whispered that he’d like to share a drink with us in celebration of Nick’s day of birth. We thought, ok, we’ll go and order some more tea if you want. But that’s definitely not what he meant! The three of us went back into his room, closed the door and he pulled out a clear, 1.5L plastic bottle filled with a red liquid. This could only be one thing: Shiraz Wine! He had purchased it from the black market at the bazaar that day.

The three of us sat discreetly in the room, whispering and swigging from the plastic bottle. It’s so funny. The way we were acting, you would have thought we were doing hard drugs or something! If we were caught it would have been a big problem for us and our new-found Aussie friend.

That’s the thing about Iran. Even though it’s an Islamic State, everyone’s pushing the boundaries here.

What do you think about the laws in Iran? Share your views with us below! 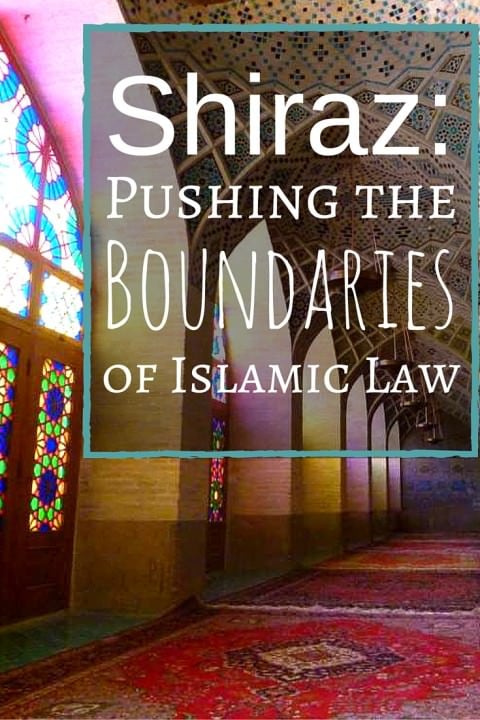