The Day We Got Paid To Be Foreign In China

Before we came to China, we had heard plenty of stories about “whiteys” getting hired by companies to pose as foreign employees but we never thought we would be involved in such a job. Turns out, these jobs are quite common in Yangzhou.

We’ve been asked to be interviewed by two different TV stations (denied because of timing) and just last week we were asked to participate in an ad campaign for a new steak house restaurant here in Yangzhou. The offer was for 200 RMB ($30) and a free dinner to go and take a few photos with the president of the company. Pretty easy money!

When we arrived at the top floor of the beautiful Jingling Hotel, we were surprised to find out that the entire thing had been lost in translation. We were actually to be taking photos in business like situations with the president of a large, green energy company. The important parts of the offer like pay and dinner were translated correctly so we hung around for one of the strangest days of our lives.

The president Mr.Zhou, was an ostentatious (albeit friendly) Chinese gangster who loved nothing more than to show us what he had accomplished. He sported a nice suit and a huge gold chain and he sat at a throne-like chair upon a massive oak desk. A group of us sat in a beautiful office on the 17th floor of the Hotel, with massive windows over looking the city.

There was Dariece, myself, four other foreigners, a photographer, a translator and Mr.Zhou’s entourage of pretty, young Chinese girls. As he spoke, his translator communicated his odd, and personal questions to us. His questions started the usual way. “How are you? Where are you from? Do you like China?” But slowly his enquiries became more personal and bizarre.

He asked how much money we make, where we live, what we want to accomplish in 2013, how much money we want to have, if we believe that money makes you happy and how we get Chinese girlfriends if we don’t speak chinese (this after 4 of us explained that our girlfriends were in the room). There was only one single, foreign girl in the room and it seemed that Mr.Zhou took notice immediately. He was leaning so far towards her that he might as well have been sitting in her lap.

He bragged about his cars (supposedly he owns a Lamborghini), how much money he makes and even his licence plate number (apparently it’s a lucky number in China). He offered us numerous jobs, from computer hacker to actor and he was constantly pitting us together in a battle of superiority. As he put it: “who number one?! WHO NUMBER 1?!” To this we would answer with sarcastic enthusiasm, which would only further nurture his insatiable ego.

At one point in the conversation he mentioned that he likes to write Chinese characters. He offered to write his name for each of us. We assumed he would be taking out a nice, fine-tipped paintbrush and introducing us to the beautiful handy-work of ancient chinese calligraphy. Nope. He pulled an old white board marker from his pocket (don’t know why he had one there was no whiteboard in the entire building) and began to scribble down his signature on a piece of paper for each of us.

Upon handing each of us a sheet of half-weight printer paper complete with his whiteboard-marker chicken-scratch, he exclaimed that we should never lose it as it is worth 3000 American dollars.

The room was getting stuffy when the photo-op began. All of us were becoming restless and weary of what this guy really wanted. We all lined up and took some photos shaking his hand at his desk.

Then we moved to the office cubicles and took some pictures pretending to answer phones and look at files. If he was trying to exude professionalism from these photos of foreigners in his office, he could have warned us. A couple of us were hung over and we were wearing a variation of casual clothes from jogging pants to hoodies.

After the photo shoot we headed out for dinner. We took Mr.Zhou’s BMW (no Lambo) to dinner and he was sure to drive full speed down all of the crowded back streets of Yangzhou (we may not have thought he was cool had he not driven irresponsibly fast). When we arrived at the restaurant there was no parking, so he hopped out and offered a random security guard 50 RMB ($8).

The security guard was in no way responsible for how people parked so he quickly shooed off the excited Mr.Zhou. By the time we entered the restaurant we were quite a sight. 7 foreigners, 8 young Chinese women, a photographer and Mr.Zhou leading the way, his gold chain gleaming in the bright restaurant lighting.

We sat down and enjoyed a delicious Sichuan hot-pot meal. It was a fancy place, they even gave us ziplock bags so we didn’t spill on our mobile phones. During dinner Mr.Zhou handed around his Iphone to show us all a picture of him sitting in his office on his throne, with a RIDICULOUS amount of Chinese Yuan stacked on his desk. He was disappointed that we weren’t more impressed by his Tony Montana impression but he kept talking anyway.

It was quite a photo, there must have been about a quarter million dollars on the desk, but none of us thought Mr.Zhou needed his ego stroked anymore so we just nodded and gave a bemused “wow”.

When dinner was over, Mr.Zhou had us sign a dodgy contract written in Chinese (to which we signed a fake signature) and one of his girls handed us our pay and wished us good luck in the new year. Mr.Zhou may be a cocky, obnoxious gangster but at least he’s a man of his word. We left dinner with full bellies, money in our pockets and a funny story.

Our friends have since received picture messages from Mr.Zhou of stacks of money and job offers. These messages come often and at ridiculous hours, so Dariece and I are happy that we don’t have picture phones! We have mixed feelings about our day with Mr.Zhou, we don’t know what will become of those pictures but if we see our faces on massive billboards all around China, we’ll be happy that we were paid $30, given dinner and introduced to a strange character along the way.

For More On China: 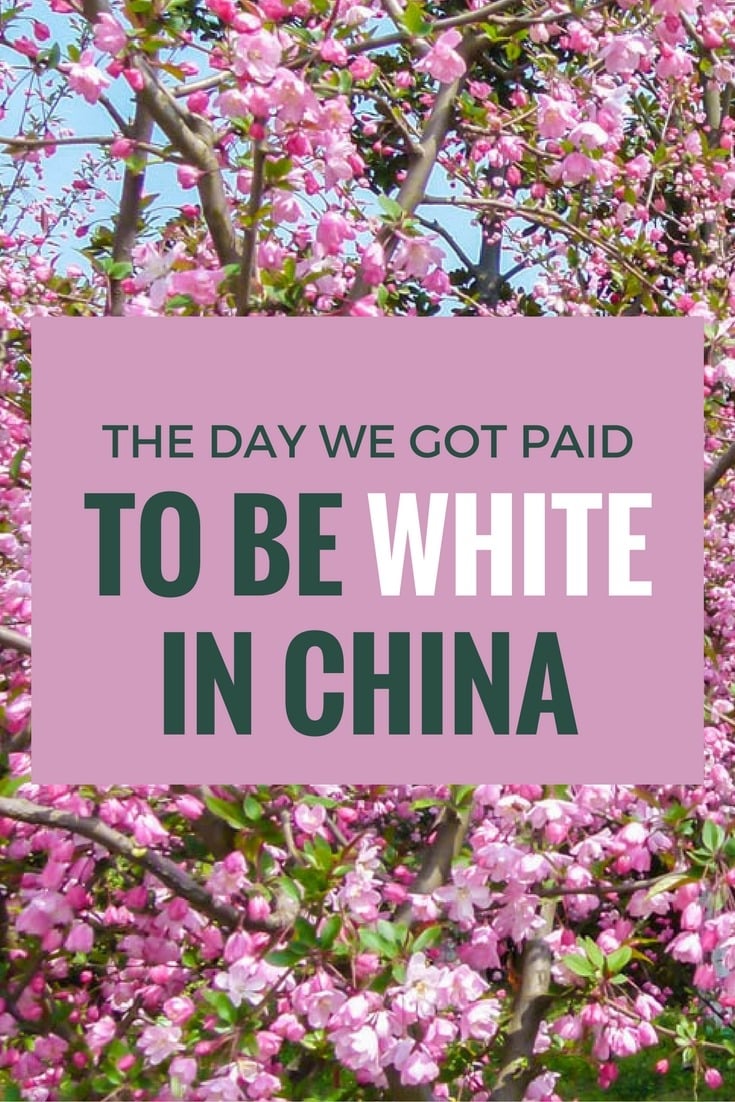