So far our trip to Mongolia has been amazing! We’ve spent 6 days on a Gobi Desert tour, watched the Nadaam festivities in the countryside, witnessed a captivating Monk ceremony at a beautiful monastery and wandered around the capital city of Ulan Bator.

While traveling Mongolia, we’ve learned a lot about the Mongolian people, their way of life and their culture. It’s one of the most fascinating and different places we’ve been. There’s so much to learn when travelling in Mongolia, there’s even a whole different set of rules when staying in a family ger, which we’ll tell you about later!

For now, here’s a run down of some of the main cultural quirks you’ll find while travelling in Mongolia:

Mongolians are a nomadic people. They move about the steppe with their livestock in search of grassy areas 2-4 times a year. They pack up their home (ger) and all of their gear and set it all back up again when they find their new home for the next 3(+/-) months.

Mongolian women run the show! Unlike many other parts of Asia where men “wear the pants” in a relationship and are of a higher importance when it comes to family and business, things are different here. The women of Mongolia make most of the important household decisions, run businesses and do the typically male jobs as well – like being tour guides, drivers, running hostels and gutting goats. They also hold 70% of the skilled jobs in the cities.

Stepping on someone’s foot means war. If you step on, or kick someone’s foot accidentally, you have to immediately shake their hand. If not, it means that you want to wage war with them!

Mongolians have a strong connection with their horses. Not only is it the main form of transportation out in the countryside, but it is also considered a part of the family. They learn how to ride one at the age of two! There are definitely a lot of bow-legged men around here. There’s an old Mongolian proverb: “A man without a horse is like a bird without wings.”

While eating a meal, never sit with your legs crossed or pointing straight out. Always sit with your knees together and if you’re sitting on the floor, just fold your legs under you.

Flicking Alcohol around is customary. When drinking vodka, you have to dip the ring finger of your right hand into the drink and flick the booze into the air 2 times – as an offering to the sky and the earth, then you rub a bit of vodka on your forehead before drinking.

When passing around a glass of vodka, only one person can do the pouring, and that is a man’s job. When it comes to his turn to drink, someone else has to pour the booze for him.

If you don’t want to take your turn in doing a shot of vodka, all you have to do to show respect is put your lips to the glass…and then pass it on. The same goes for the famous fermented mare’s milk, called arak.

Don’t hold a glass by the rim, always hold it by its sides or the bottom (no matter how hot it is).

When offered tea, always sip it before putting it down. This tells the guest that you appreciate and enjoy the generous offering.

Don’t say sunbanu (hello) more than once to the same person. The Mongolians will think you have a mental problem.

We think it’s really important to be aware of the dos and don’ts of a country before travelling there. By knowing these quirks before heading to Mongolia, not only will you be more respectful, but you’ll impress the local people as well!

Have you been to Mongolia? If not, do you think you’d like to travel there? Leave a comment below! 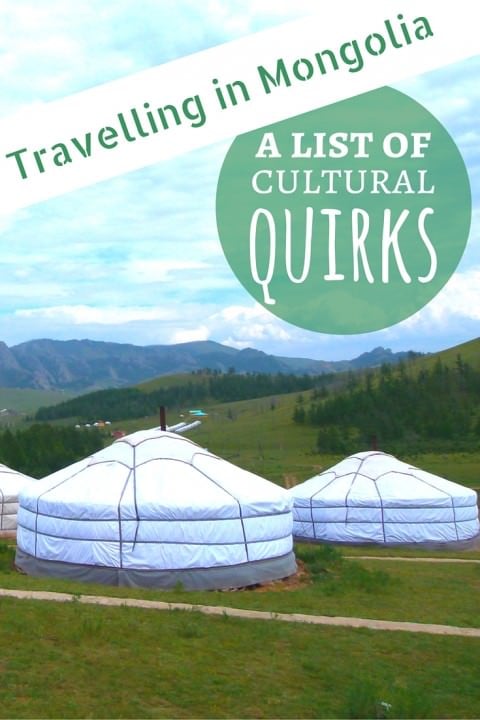