Travelling With A Drone: How We Carry It, What it Costs, The Cons & The Pay-offs

As you know from our YouTube channel, we’ve been travelling with a drone for a few months now. The drone definitely takes up a lot of extra space in our packs, but we’ve re-arranged things nicely and we’ve also picked up the perfect backpack for the job.

Note: Don’t miss the drone packing video at the bottom of this article!

We’ve been getting quite a few emails and comments about how we manage to travel with a drone, so in this article I’ll fill you guys in on how I pack it, how much it weighs, what it costs, why I have it and if it’s worth it for better videos. 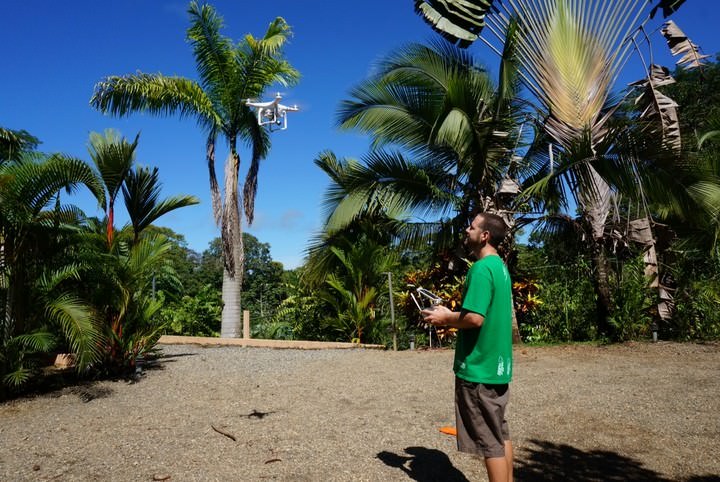 About a year before I bought the drone, I saw a video on YouTube of a guy who was using the Vanguard Up-Rise II 48 backpack to load his Phantom 2. When the Phantom 3 came out earlier this year, I wasn’t sure if it would fit the same way that the Phantom 2 did, but I bought it anyways and contacted Vanguard about the Up-Rise II 48. 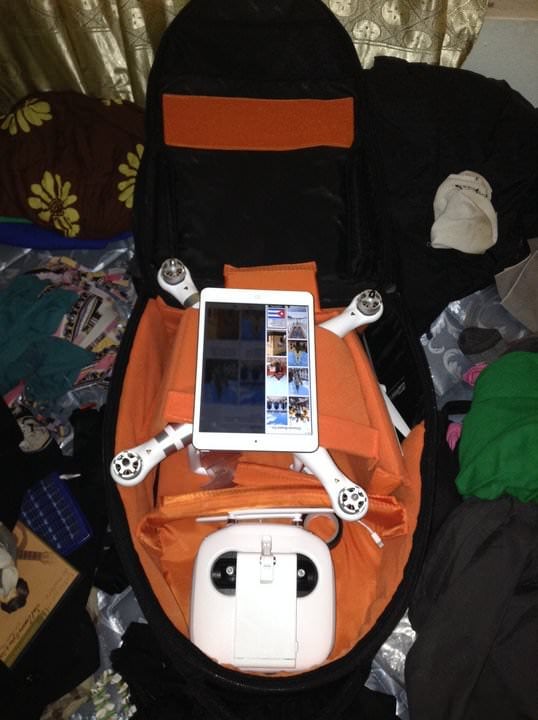 Luckily, they were willing to send us a bag for testing and review, but seeing as this bag is only $169.99 on Amazon, it’s already cheaper than most other drone bags on the market. This makes it an easy purchase for anyone who has already invested in a Phantom 3 and plans to travel with a drone.

The Uprise II fits the drone perfectly and it gives the Phantom plenty of padding and support as well. The bag isn’t actually made for the drone (though Vanguard told us in an email that they have something planned…shhh!), but the fact that it’s not a designated drone bag is actually part of the reason why I chose it. 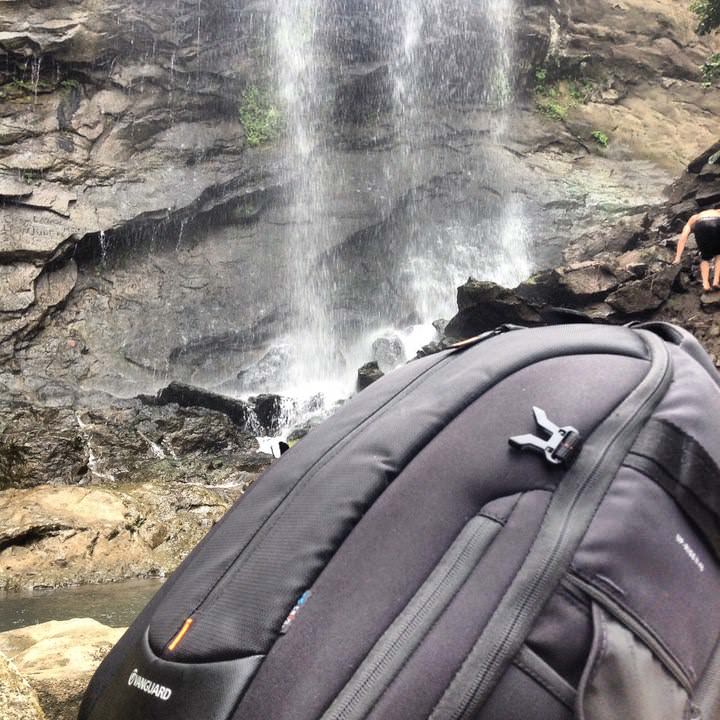 The Phantom is already a target while travelling. Flying an expensive camera in the sky isn’t exactly inconspicuous, especially when you’re travelling to developing countries with high crime rates (ie: ones in Latin America), so having it packed away in a bag that just looks like a regular backpack was important for me. 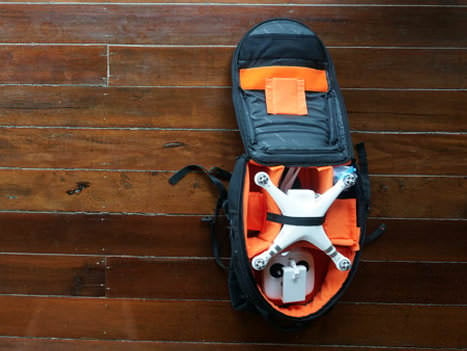 If you’ve seen other drone bags, you’ll notice that they’re usually perfect squares and they often even have branding that makes it clear what’s inside. This is the last thing that I wanted. The Vanguard bag looks like a regular day bag and while it’s a bit large on my front side as a “second pack” it still doesn’t look like it’s carrying anything more valuable than my previous day pack was.

Also, normal drone bags usually have a hard foam lining, which is great for protecting the drone, but not ideal if you want to put other things in the bag besides the Phantom and its accessories. The Vanguard can hold my drone, Nex-6 camera, GoPro, Feiyu-Tech Gimbal, Macbook Pro and all of the cords quite easily.

I did find however that having the laptop and the drone in the same bag made it a little bit heavy for me to carry on my front, so Dariece carries our laptops and cords in her day bag, and I carry the rest of our electronic equipment in the Vanguard.

Why Did We Get A Drone?

I love creating movies and sharing them on Our YouTube Channel and while video creation is an aspect of the blog that doesn’t currently make us any money, it’s my favourite thing to do for Goats On The Road and I love hearing people’s responses to our travel videos. 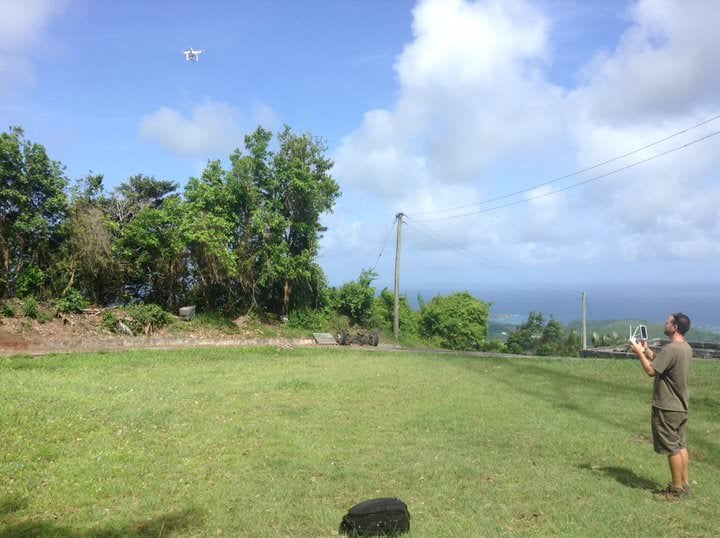 Travelling with a drone was an obvious next step into better travel video production. After getting the Feiyu-Tech gimbal for video stabilization, the drone was the first thing that we thought of to improve our YouTube channel.

How Much Did It Cost?

The Phantom 3 Advanced (which is what I have) goes for $999. I also purchased the iPad mini to go with the setup because my iPod 5 was incompatible. You can use Android devices and Apple smart devices for the drone, but I figured the iPad Mini was the perfect size. The device isn’t too big to carry around, and the screen isn’t too small that you can’t see fine details in the streamed video while flying. The iPad Mini was $280 on Amazon (currently on sale). 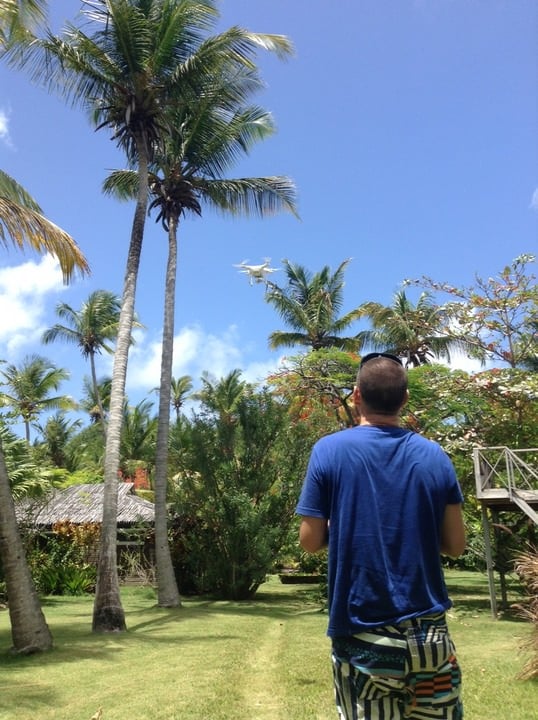 If you were to go out and buy the same set up as me, the cost breakdown would look like this:

I’m looking into picking up some prop guards and an extra battery for the drone, but that’ll be sometime down the road. It should also be noted that, just a couple of days ago, DJI released a (arguably) better drone for less money than the Phantom 3 Advanced. The new drone has a better camera than the Advanced and only costs $799. Click Here to purchase this drone and make me envious!

Weight (Including Battery And Propellers) = 1280 g

Diagonal Size (Not Including Propellers = 395 mm)

Is it Worth The Weight & Hassle?

We’ve only had the drone for a couple of months, but already I’m seeing a great response from the videos that I create with it. I’m seeing more comments on the videos and many of them are specifically commenting about the drone footage.

I have to say that we haven’t really travelled extensively with it yet as we’ve only gone from Costa Rica to Grenada with it, but I’m so excited with the response from the drone so far, that I think any travel hassles that it comes with will be well worth the extra weight and bulk.

We’ve also had a couple of offers from companies wanting us to create drone videos to promote their businesses, which is great. This was definitely part of the reason we committed to such a large investment in the first place and we’re happy to see the potential for it to pay itself off.

Also, it’s really fun to fly the drone. Aside from the business aspect of travelling with a drone, it’s just a fun toy to have.

The Downsides Of Travelling With A Drone

For sure, there are some downsides to having a drone on us while travelling, but we’ll just have to accept them and carry on with our normal adventures. While it is a bit worrisome to carry an expensive flying camera around the world with us, we have to just go with it and not let it hinder our travel plans.

A DSLR camera with lenses costs about the same, but probably doesn’t look like as much of a target as a fun-to-fly, remote controlled camera.

I’ve listed a few cons about travelling with the drone below, but I think they’ll be outweighed by the pros. 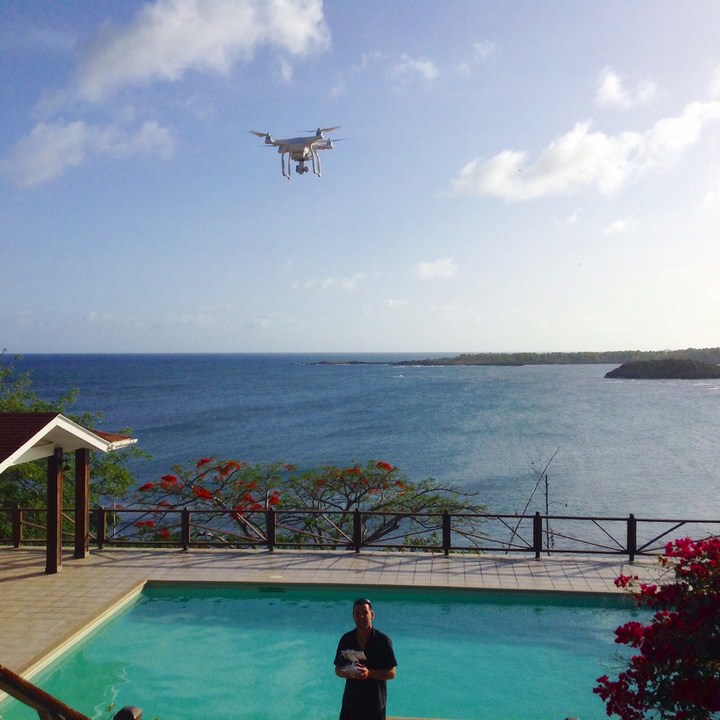 The Fun & Fear Of Flight

Travelling with a drone is pretty cool. It’s amazing to get brand new perspectives of the places that we visit. Especially because Dariece and I like to travel to a lot of very off-the-beaten-path places. There are times when I’m flying the drone in Grenada and I’m pretty sure that I’m the first person to ever see these places from the sky (and we get to share that with you guys!).

When I first got the drone, everything was fun and games. I flew it around without a care in the world. But since crashing it while shooting this video, I have a new anxiousness about flying it.

If you choose to travel with a drone, you should know that every time you launch it, there’s a chance you could crash it. So if you work with a company to promote them, you better charge a good fee. It’s really not that hard to fly a drone, but it’s also not hard to crash one.

Luckily my drone only sustained minor frame damage during my crash, but often times the drone can be totalled after an accident, leaving you with 3 kg of scrap plastic.

Overall Thoughts About Travelling With A Drone

While I was hesitant to travel with a drone at first, now that I have it, I’m very happy that we made the investment. Our videos will continue to improve as I continue to practice flying and filming with the drone and although it takes up some space, now that we’ve upgraded to the Numinous 55L backpacks, we have plenty of extra room.

I’ll report back and update this article after we’ve travelled more with the drone, but for now, hopefully this gives you a good idea of what it weighs, how we pack it and if it’s worth it for you to pick up a drone yourself. I’d say, if you love making cool travel videos, then travelling with a drone is definitely worth the money, space and weight.

For More About How We Pack Our Drone, Watch This Quick Video!

Do you, or someone you know, travel with a drone? Tell us some pros & cons in the comments below! Are you interested in getting one? If you have any questions about travelling with a drone? Feel free to ask us below.

Is This Article Worthy Of Your Board? 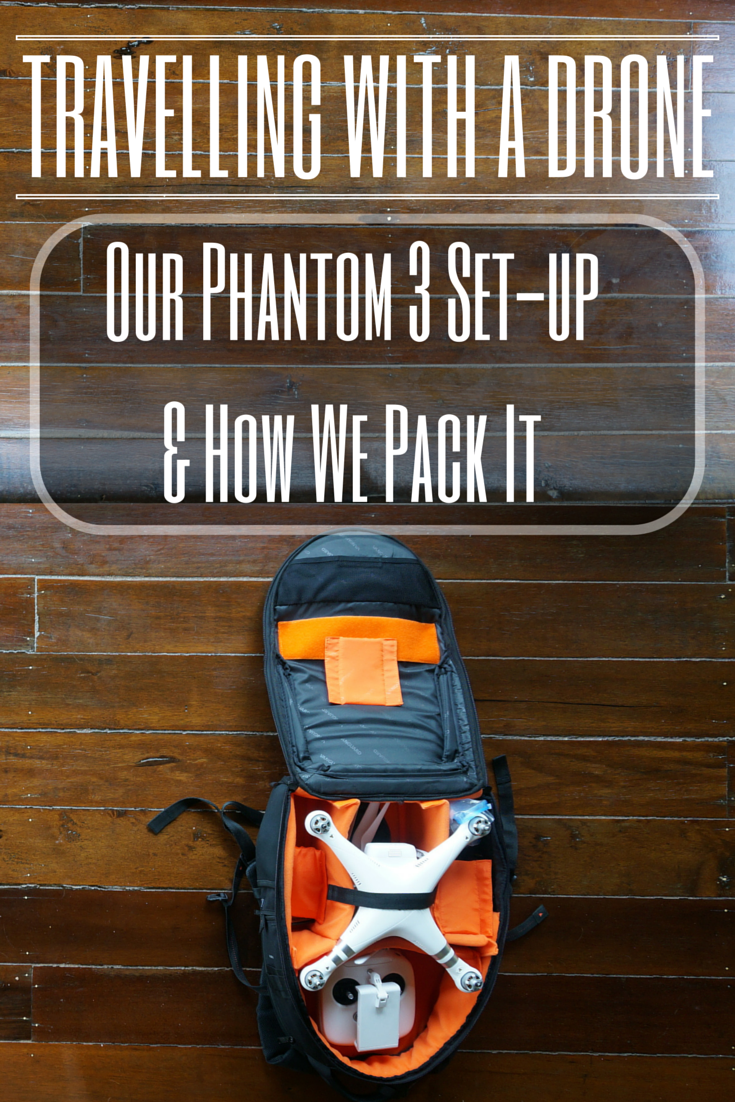 Finding interesting gifts for travel lovers can be a daunting task. Not only do you need to find a gift that they’ll like, but something they’ll actually use. As travellers ourselves who have been on the road for more than 10 years now, we’ve got the inside scoop on useful and fun items for travel ...
November 27, 2022
By:
Dariece Swift

Best Equipment For Vlogging (Our Kit & How We Pack It)

In this post, I’m going to share with you the best equipment for vlogging. This is the gear we personally use or plan to upgrade to. We’ve been vlogging and travelling for nearly 10 years, since cameras were barely over 5 megapixels, the smartphone was barely invented and you’d be hard-pressed to find a backpack ...
August 7, 2021
By:
Nick Wharton & Dariece Swift
About
Contact Us
Work With Us
Start Here
Start a Blog
Privacy