Welcome to our Uzbekistan Travel Guide. On this page you'll find all of our posts about travelling in Uzbekistan as well as some useful travel tips about the best time to visit, where to go, things to do, where to stay and much more.

As far as historical architecture goes, no country on Earth will likely impress you more than Uzbekistan. With jaw-dropping masterpieces like Registan Square in Samarkand and pretty much the entire historical centers of Bukhara and Khiva, this ancient silk road trifecta combine to create one of the region's most architecturally blessed nations.

So why isn't it more popular? Why don't more people visit beautiful Uzbekistan?

While you're travelling around the country, eating the delicious food, meeting the welcoming local people and gazing up at 1,000-year-old palaces, you'll likely ask yourself this many times. To be honest, we have no idea why more people don't come here. 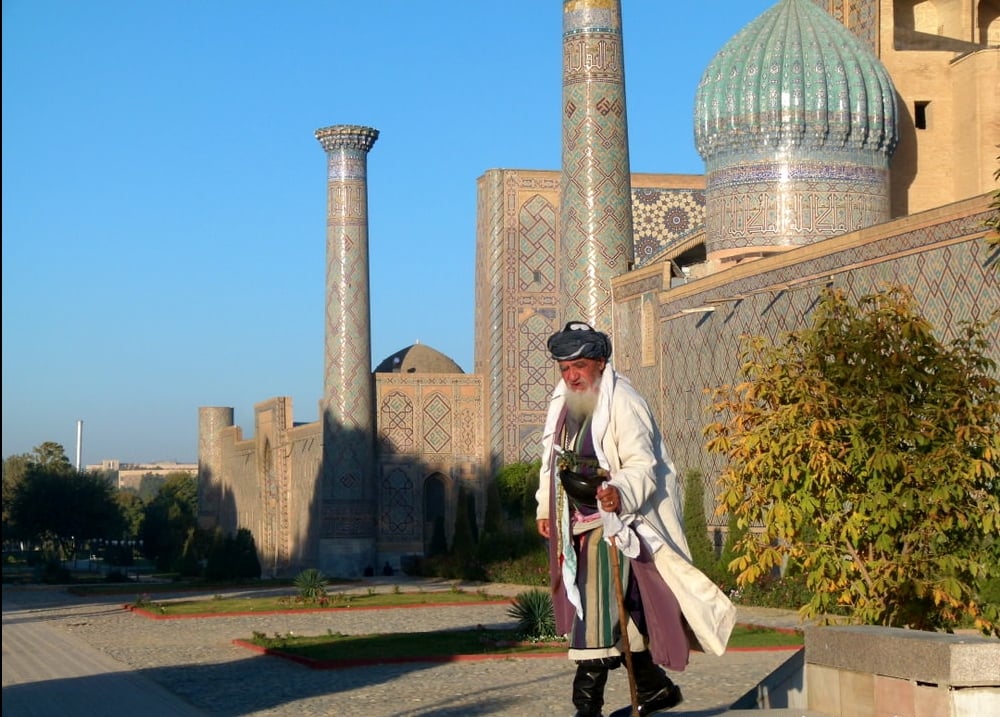 But that's a good thing! You can travel around Uzbekistan and still have much of the country to yourself. There will still be enormous crowds at the country's main sights, but take a tiny side-step from the tourist trail and you'll find yourself in the middle of nowhere.

The introduction of electronic visas last July 15, 2018 means that more people are visiting Uzbekistan than ever before. In fact, in 2018 Uzbekistan doubled it's tourism numbers over the previous year.

While this does mean that things are changing in Uzbekistan, it doesn't mean that you missed the boat to get here before the massive crowds. You can still enjoy Uzbekistan today with few tourists. Given it's such a safe and fascinating country to travel, I don't see this lasting very long.

Below you will find all of our latest Uzbekistan travel blog posts which include not only our personal travel stories and experiences from travelling Uzbekistan for more than 2 weeks, but also some useful travel information to help you plan your own trip to the region.

A 5 Month Round Up of Central Asia & Iran: Highlights Of Our Journey Through The Least Touristed Region On Earth

Wow, I can’t believe it’s over! Nearly 5 months of overland travel from China, through Mongolia, Russia, The Stans and Iran. What a trip! Even though we knew this journey would be intrepid, we could have never imagined just how adventurous it would be. END_OF_DOCUMENT_TOKEN_TO_BE_REPLACED

The Beautiful Buildings Of Bukhara, Uzbekistan

Bukhara, Uzbekistan is known to be Central Asia’s holiest city. The buildings in this ancient city are more than a thousand years old! Back in the 16th century, Bukhara was a bustling market town on the Silk Road route. Because of this, many caravans END_OF_DOCUMENT_TOKEN_TO_BE_REPLACED

Samarkand : The City Of Wonder

After a relaxing 11 days in the big city of Dushanbe, we hopped on a shared taxi and headed for Samarkand. The journey which is meant to take 7 and a half hours, actually took 11 because there were so many police check-stops along END_OF_DOCUMENT_TOKEN_TO_BE_REPLACED

Before coming to Central Asia we hadn’t really stayed in a homestay before and we were confused as to how they work. We had a lot of questions about how it works. Do you stay in the family’s room? Are there dorms? Does the END_OF_DOCUMENT_TOKEN_TO_BE_REPLACED

Goats On The Silk Road: Where The Hell Are We?

We’ve been blogging away, writing endless posts about this enchanting, little-visited land known as Central Asia. But what is Central Asia? Where the hell are the Goats? I think it’s about time that we fill our readers in on the area and why we’ve END_OF_DOCUMENT_TOKEN_TO_BE_REPLACED

Counting Down The Days Until Departure!

We have only a few weeks left here in China! I don’t know how this is even possible. It feels like we just celebrated Christmas. In 26 days (but who’s counting?!) we will be hoisting our backpacks over our backs and heading back out END_OF_DOCUMENT_TOKEN_TO_BE_REPLACED

Depending on which country we travel to, we have a different  To-Do List. Some of the items remain the same (getting vaccinations, budgeting for the trip, buying travel gear, etc.), but for this particular trip, which will take us through Mongolia, Russia, Central Asia END_OF_DOCUMENT_TOKEN_TO_BE_REPLACED

Travelling to Central Asia: Pressures Of The Planning Process

We have 3 months left before our teaching English contract here in China is up and we’ve officially started planning for our next trip! It’s turning out to be quite the process. We knew that travelling to one of the least touristy regions on END_OF_DOCUMENT_TOKEN_TO_BE_REPLACED

When To Travel To Uzbekistan

The best time to visit Uzbekistan and most of Central Asia is in the Spring and Fall. During this time the weather is ideal for hiking, trekking, exploring cities, sightseeing and being outdoors.

In the Spring, the winter frost has melted, the sun is shining and the skies are clear. In the fall, the intense heat from summer has cooled off and so have the tourist numbers, making major sights in Bukhara, Khiva and Samarkand much less crowded.

During the summer months of June-August, the mercury can soar, making it uncomfortably hot to travel around the country.

Very few people visit Uzbekistan in the winter months of December to February and some hotels, restaurants and tourist facilities will be closed down.

The above numbers are according to Holiday-Weather.com

We visited Uzbekistan in late November and it was still a great time to visit. While the daytime temperatures were cooling down, the skies were still clear and sunny and we didn't need to have warm clothing during the day, but a light sweater at night was useful.

When we return to Uzbekistan, we'll do so in the shoulder-season again as it's the best balance between fewer crowds and good weather.

We recommend the below companies to help you with your Uzbekistan travel booking, planning and insurance. We recommend them because we personally use and trust them, but the links below are also affiliate links, which means we receive a small commission if you purchase products or services from them. It will never cost you extra and we appreciate your support.