Happy Island: The World’s Coolest Beach Bar On An Island Made Of Seashells (WITH VIDEO)

This Happy little atoll lies just a few hundred meters off the coast of Union Island in St.Vincent and The Grenadines. It all started with a man named Janti, who was working as a volunteer environmental officer. With tourism starting to flourish in SVG, his task was to clean up the beaches around Union Island which were littered with thousands of Lambi shells. Lambi is the Caribbean word for conch, the famous horn blowing shell, and they are left all over the beaches when fishermen harvest their muscle for food and discard the shells.

After struggling to motivate people to help him clean up the piles of conch, he came up with the brilliant idea to use the shells to create an island and pool bar!  He collected thousands of shells and slowly started piling them up in the middle of the shallow sea. Janti was determined to make land out of lambi and he succeeded when he first opened the bar in 2002.

He chose his spot wisely, knowing that heavy winds and tropical storms could spell disaster for his little haven, he piled the shells in front of a natural coral barrier so that the waves would break long before they reached his tiny island.

Once Janti had collected enough lambi shells to break the surface of the sea, he started to use cement mould to hold the structure together. He then built a tiny bar, a couple of stools and hung a hammock… this was the birth of Happy Island.

In 2007 Janti added on to the island and built his home on it! He now lives out his days in his own little man-made paradise with boatloads of tourists and locals coming for drinks and lunch at his amazing little bar. Today the island has a few healthy palm trees, a large bar, numerous tables and two guest rooms – if people are too woozy to make their way back to “the mainland”, they can stay the night on Happy Island.

When we visited Happy Island, Janti was happy to show us a good time with plenty of beers, rum punches and quintessential Caribbean music. We danced, swam and drank the afternoon away. We had originally planned to just go for a beer, but the vibe of the island got to us and soon we were partying with Janti and starting to understand why he called this place “Happy Island”.

The azure waters and sandy pools that surround the island are absolutely stunning and there are views of Union, Palm Island and the Tobago Cays from the patio tables. We have never felt more “Caribbean” than we did on Happy Island.

Don’t Miss Our Short Video Of This Amazing Place!

If you’re ever on Union Island and you feel like getting happy, talk to Marius at Kings Landing Hotel and he’ll set you up with a boat over to meet Janti and party hard. We had a blast and we highly recommend Happy Island to anyone travelling in the Grenadines! 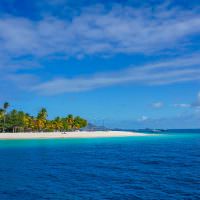 The Tobago Cays – A Perfect Day of Sailing in the Caribbean

11 thoughts on “Happy Island: The World’s Coolest Beach Bar On An Island Made Of Seashells (WITH VIDEO)”