We love eating at street-side vendors and have our favourite ones here in Yangzhou. However, those foods consist of delicious cold noodle dishes, soups, wraps and fruits — not insects!

China is definitely one of the best countries for incredible cuisine in the world, but the weird food on this list may be a bit too shocking for most western palates.

During our travels around Hangzhou and Beijing we saw these animals and insects cooked up for sale at the markets, and being enjoyed by the locals.

Here’s a list of some of the less appetizing, strange street foods seen in China:

Note: to us westerners these foods may seem “weird”, but they are a normal part of the diet in China. Many places in the world eat insects, creepy crawlies, and other food that we would consider strange. Don’t knock it before you try it!

While we were travelling around Hangzhou, we spotted these massive spiders for sale at a market. They were so huge that I was even scared to take a photo of them!

China is one of the cheapest countries to travel and the cheapest to live in as well, but if you’re eating insects you can save even more money.

Sure, crab meat is delicious but when it’s fried whole, eating the shell (and everything else) is a must and you’ll spend the rest of the day picking bits of it out of your teeth.

We saw these beaks for sale and wondered…wow much meat could possibly be found on the beaks and heads of these cute little birds?

Are there not enough fully grown chickens in the world that people have to resort to eating the chicks? But, the same goes for eating veal, lamb, and suckling pig.

Fried and stuck on a stick, these reptiles are apparently delicious.

Another one that was hard to see. These teeny-tiny animals of the ocean are sought after by scuba-divers and are considered endangered. It’s thought that they may become extinct in 3 decades.

These big, black, creepy crawlies have been spotted in both Beijing and Hangzhou, but we’ve yet to try them here. We did try a scorpion when we were in Thailand though. But here in China, they’re just too big!

We’ve tried small scorpions and maggots in Thailand when we were slightly intoxicated but we just don’t have the desire to try any of the “food” listed above! Who knows though, maybe it’s delicious and we’re the ones missing out…I guess we’ll never know.

What’s the weirdest food you’ve ever tried while travelling?! Tell us about it below. 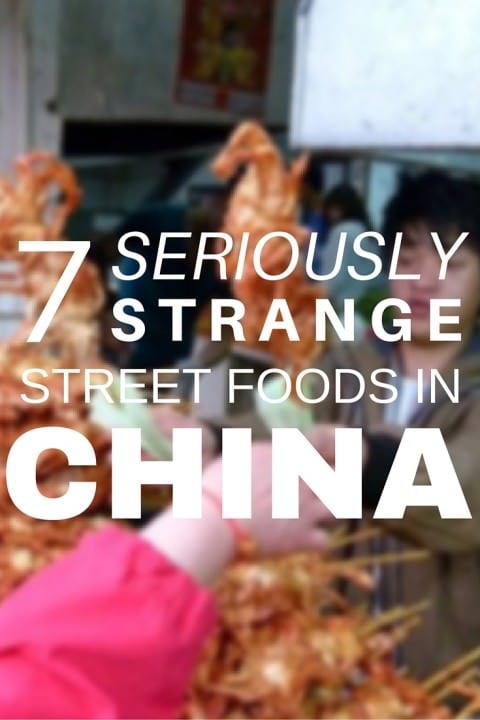