Welcome to our Nepal Travel Guide. On this page you'll find all of our posts about travelling Nepal as well as some useful tips about the best time to visit, where to go, things to do and much more.

To this day, Nepal is one of the most visually stunning countries we've ever visited. Blessed with more 8,000+ meter high peaks than any other country, the towering beauty of the Himalayas is what draws most people to tiny Nepal.

But there's more here than just scaling the world's highest mountains. Nepal has plenty of breathtaking lower lying trails that make for great day trips, no matter how old you are or what your physical abilities are. 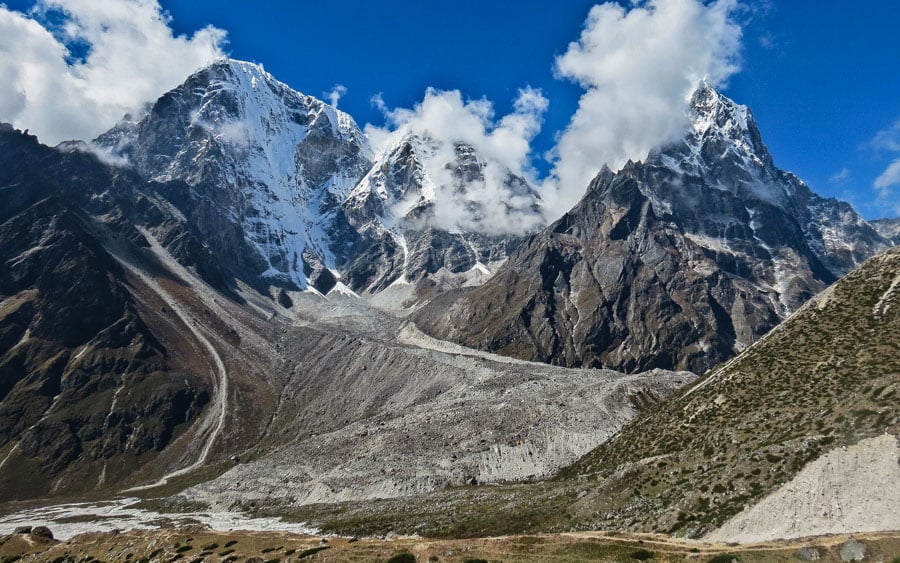 It also has some chaotic but exciting cities like Kathmandu and some laid back mountain villages and towns like Pokara. There are enough things to do in Nepal, besides trekking, to keep visitors busy for weeks on end.

Nepal is located in a unique position. Corralled by superpowers, with China to the north, India to the south, east and west, the tiny mountainous nation of Nepal sits at a disadvantage to its neighbours when it comes to GDP and the global arena, but is blessed with more nature per capita than both of them combined.

Below you will find all of our latest Nepal travel blog posts which include not only our personal travel stories and experiences from travelling Nepal for more than 2 weeks, but also some useful travel information to help you plan your own trip to the region.

12 Amazing Places To Visit in Nepal

From mystical temples to gorgeous mountain villages, there is no shortage of beautiful places to visit in Nepal. Lodged between the large masses of India and China, the little Himalayan nation may be small in comparison. However, its stunning scenery rivals that in the END_OF_DOCUMENT_TOKEN_TO_BE_REPLACED

7 Exciting Things To Do in Kathmandu Nepal

It’s hard to visit Nepal without going through its capital and experiencing the many things to do in Kathmandu. Full of contradictions and organized chaos, Kathmandu is an assault on every sense in the best possible way. Every traveller to Nepal inevitably stops in END_OF_DOCUMENT_TOKEN_TO_BE_REPLACED

Let us begin this article with a disclaimer: we are not avid trekkers. In fact, we had never completed a serious trek before arriving in Nepal. So to say that we approached our trekking adventure in Nepal with some trepidation is a total understatement. However, despite our END_OF_DOCUMENT_TOKEN_TO_BE_REPLACED

You might think of Nepal as the ultimate trekking destination that is best explored on foot, where you will be following animal tracks, crossing high passes, and reaching the base camps of the highest mountains in the world. But, this small Himalayan country offers END_OF_DOCUMENT_TOKEN_TO_BE_REPLACED

Pokhara, Nepal: Coming Back Down To Earth

Coming down from the trek was bittersweet. On one hand, we were looking forward to being back in ‘civilization’…aka, proper coffee, hot showers and food other than noodles and lentils. On the other hand, we were sad to say goodbye to the fresh air, END_OF_DOCUMENT_TOKEN_TO_BE_REPLACED

When we got off the bus in Besi Sahar, the starting point for the Annapurna Circuit, we were completely unaware of what lay ahead. Sure, we had done ample research and planning but in the end, you can’t be prepared for a journey so END_OF_DOCUMENT_TOKEN_TO_BE_REPLACED

Upon arrival in the bustling city of Kathmandu, we realized this was just what we needed! There was so much going on all around us – motorbikes dodging pedestrians, music blaring out of bars, men on the streets selling Tiger Balm (and everything else) END_OF_DOCUMENT_TOKEN_TO_BE_REPLACED

Dar Es Salaam to Kathmandu – A Slight Change Of Plans

We had one more day in Dar Es Salaam before flying out (very convolutedly) to Nepal. Even though we had this flight booked 6 months in advance, we still managed to royally screw it up. We were to fly from Dar Es Salaam to END_OF_DOCUMENT_TOKEN_TO_BE_REPLACED

When To Travel To Nepal

The Best Time To Visit: October-November

If you're coming to Nepal for trekking in the Himalayas, then you'll definitely have to consider the weather when planning your trip. The trails around the Annapurna Circuit and many of the mountain passes can become snowy in late November and often close by December.

When you're thinking of the altitude of most of the Himalayas, you'd probably expect that it's cold pretty much year round, but that's not the case. There is a varied climate here, with October and November being a distinctive fall season and the best time to visit. This is when there are the most sunny days and clear skies.

The Spring comes between March and May and this is the second peak time and likely the second best time of the year to visit, with more clear skies and sunny weather for trekking (although not historically as clear as October). This is also a great time to see the flowers in bloom throughout Nepal and particularly on many of the mountain trails.

You can actually visit Nepal year-round, but in January and December you'll need a lot of warm clothing and you won't be able to go over many of the higher mountain passes (above 4,000 meters).

The Monsoon season hits Nepal in mid-June and lasts through until the middle of September. During this period it is likely that it will rain for a couple of hours pretty much every day. It's also a time when the weather is generally cloudy and trails can be muddy, but you could still get some clear days.

The summer (July and August) can be surprisingly hot. Temperatures at lower altitudes can reach 30°C (86°F) and can be uncomfortable during long trekking days.

Check out Holiday-Weather.com for annual average temperature, precipitation and sunshine hours in Nepal.

We recommend the below companies to help you with your Nepal travel booking, planning and insurance. We recommend them because we personally use and trust them, but the links below are also affiliate links, which means we receive a small commission if you purchase products or services from them. It will never cost you extra and we appreciate your support.