Welcome to our Egypt Travel Guide. On this page you'll find all of our posts about Egypt travel as well as some useful travel tips about the best time to visit, where to go, things to do, experiences to have and more. We hope this page will help you plan your trip to Egypt and make the most out of travelling in this fascinating country.

While Egypt has a bit of a reputation for having aggressive people who try to sell you everything at every turn, this just wasn't our impression of the people here when we visited. We found the Egyptian people to be friendly, warm, welcoming and no more pushy than the people of other countries in the region.

Egypt has had tourists visiting for as long as it was possible to visit another country, and yet they still welcome tourism with open arms. It's one of the major industries here and visiting the country can greatly help its economy. 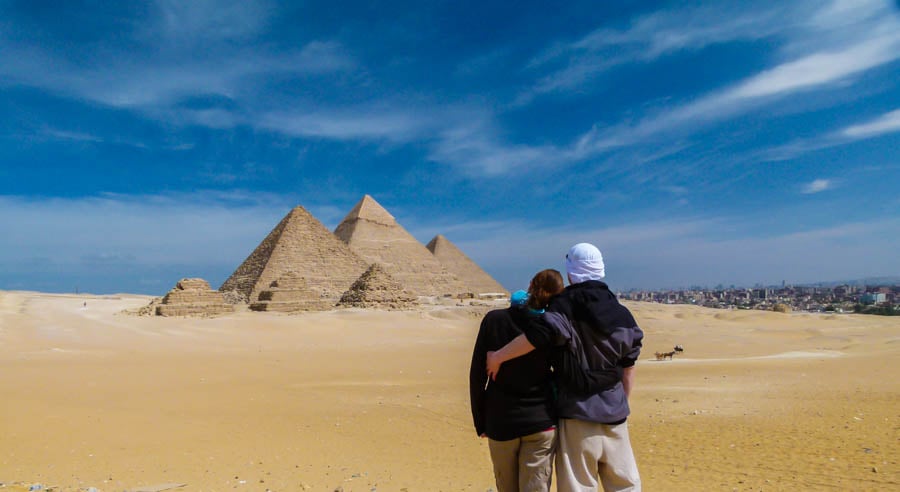 With a total area of 1,001,450 square kilometres (386,660 square miles), Egypt is technically the 31st largest country in the world, but enormous swaths of unforgiving desert make it seem much larger for those travelling around the country.

The population of Egypt is over 100 million people (2020 census), making it a very populous place to travel, but most of the population is found along the banks of the Nile River, an area of around 40,000 square kilometres (15,000 square miles), where the only arable land in the country is found.

Despite the concentration of people along the banks of one of the world's great rivers, while sailing down the Nile you'd never think that so many people currently live here. This is without a doubt one of the best things to do in Egypt and we highly recommend it.

Whether you travel Egypt as a budget backpacker or on a high-end budget, the country has something to offer everyone. Surprisingly good food, friendly people, unfathomable history and the world's oldest architecture make the home of civilization itself one of the best places in the world to travel.

Below you will find all of our latest Egypt travel blog posts which include not only our personal travel stories and experiences from travelling in Egypt for more than six weeks, as well as some useful travel information to help you plan your own trip to the region.

We hope that the posts below will help you better understand what its like to travel to Egypt and help you plan your trip to this incredible country.

What To Expect From an Egyptian Nile Cruise

To experience the wonders of the Nile while sailing in a mini hotel is one of the most pleasurable experiences one could have while visiting Egypt. With a mixture of luxuries a dash of history and sprinkle of fun, the magical water of the END_OF_DOCUMENT_TOKEN_TO_BE_REPLACED

This is the ultimate budget backpacking guide to Egypt, a place filled with backpackers who are seeking out excellent adventures on a budget. Egypt has it all, from The Great Pyramids Of Giza to the lost oases in The Great Sand Sea, this is END_OF_DOCUMENT_TOKEN_TO_BE_REPLACED

“From birth, man carries the weight of gravity on his shoulders. He is bolted to earth. But man has only to sink beneath the surface and he is free.” – Jacques Yves Cousteau –   A Diver at the Blue Hole We spent 2 END_OF_DOCUMENT_TOKEN_TO_BE_REPLACED

Egypt has got to be one of the best backpacker destinations! After our relaxing 4 days of sailing down the Nile River (which fit easily in our backpacker budget), the 6 of us headed to Luxor. Bernie and Toni only spent the one night END_OF_DOCUMENT_TOKEN_TO_BE_REPLACED

We arrived in Aswan late at night after a beautiful train journey along the Nile River. Budget backpackers may seem cheap by never flying anywhere, but they get to see the countryside that jet-setters simply miss out on. Aswan is a stunning city set END_OF_DOCUMENT_TOKEN_TO_BE_REPLACED

The 6am bus ride (budget backpackers have no choice) from Dahkla to Asyut was uneventful, we were both super tired and slept for 4 hours out of the 7 hour ride. I was rudely awoken by my head banging against the window over and END_OF_DOCUMENT_TOKEN_TO_BE_REPLACED

After our trip backpacking through the incredible deserts near Bahariya, we continued on to yet another beautiful desert oasis called Dahkla, a budget backpacker’s haven. Boarding the bus in Bahariya we were looking forward to a relatively quick 6 hour bus ride over to END_OF_DOCUMENT_TOKEN_TO_BE_REPLACED

From the fabulous Oasis Town of Siwa, we negotiated a ride with a jeep driver (that fit in our backpacker budget). Us and our 2 Canadian friends were planning to cross the Great Sand Sea to the next Oasis town of Bahariya. It took END_OF_DOCUMENT_TOKEN_TO_BE_REPLACED

Siwa is more than an oasis in The Great Sand Sea, it is an oasis in the sea of modernity. One of the few places on Earth where the outside world has yet to completely corrupt and destroy. The blue prints have been made END_OF_DOCUMENT_TOKEN_TO_BE_REPLACED

March 9 – 15 / 2011 We landed in Egypt on March, 9 / 2011 just after the revolution of the people had reached it’s boiling point and simmered off for a few days. We had mixed feelings about coming here. On one hand END_OF_DOCUMENT_TOKEN_TO_BE_REPLACED

When To Travel To Egypt

The Best Time To Visit: July-August

The best time to visit Egypt is September-November and February-April. Deciding when to go to Egypt depends on your style of travel and your ability to cope with heat.

July and August can be almost unbearable anywhere south of Cairo, while December and January can be a little bit chilly north of the capital.

You can visit Egypt any time, but as fellow travellers, we would suggest avoiding the major tourist months of December and January when crowds are at their heaviest.

With sights like Luxor and The Pyramids of Giza it's no real surprise that visitor numbers can increase rapidly during the peak season.

Visitor numbers to Egypt peaked at around 14 million in 2010, then dipped to almost a third of that following the riots in the region in 2016, but today the numbers are rising again and it is expected that they will continue to rise.

This is all to say that there's no better time to visit Egypt than right now! It's a year round destination, so start your planning and get ready for a memorable travel adventure.

We recommend the below companies to help you with your Egypt travel booking, planning and insurance. We recommend them because we personally use and trust them, but the links below are also affiliate links, which means we receive a small commission if you purchase products or services from them. It will never cost you extra and we appreciate your support.