Welcome to our Malta Travel Guide. On this page you'll find all of our blog posts about travelling in Malta as well as useful Malta travel tips like the best time to visit, places to go and things to do. We hope that this page will help you plan your trip to Malta.

Malta is a tiny archipelagic nation in the Mediterranean Sea comprising of 3 little islands. With a population of about 475,000 spread across an area of just 316 square kilometres (122 square miles), you may be tricked into thinking that a place this small could easily be seen in just a few days. This is what we were told before we visited, but it simply wasn't true. 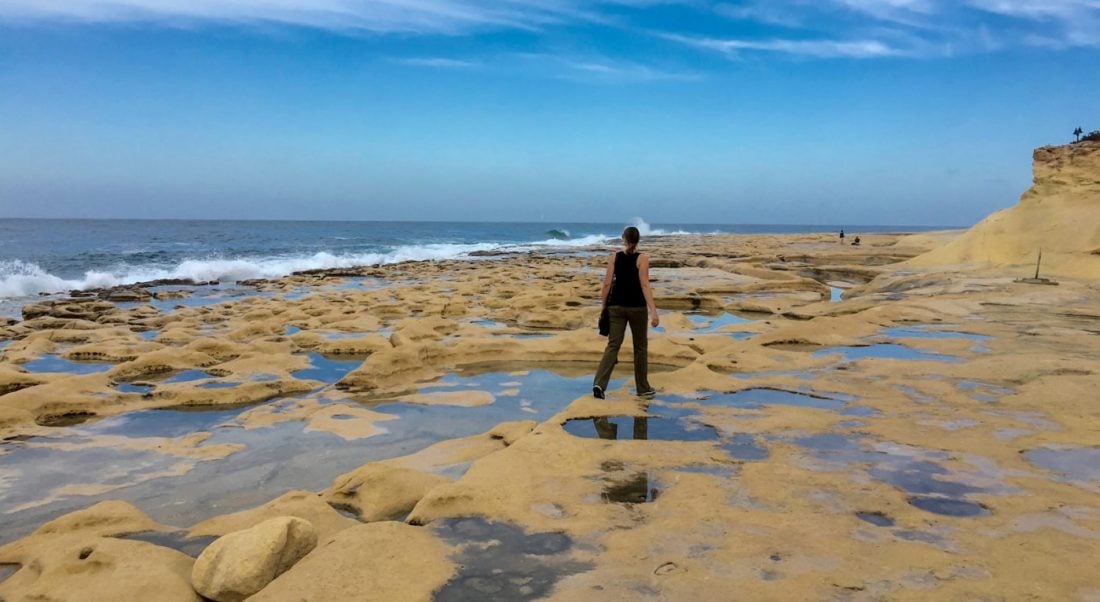 There are actually a lot of things to do in Malta spread across the three main islands of Malta, Gozo and tiny Comino. There are plenty of beautiful beaches, medieval towns and coastal walks that could keep you busy for a long time in the country.

Located 80 kilometres (50 miles) south of Italy, 284 kilometres (176 miles) east of Tunisia, and 333 kilometres (207 miles) north of Libya, Malta finds influence from all of its closest neighbours.

Malta was historically a very important base for many conquering powers including Phoenicians and Carthaginians, Romans, Greeks, Arabs, Normans, Aragonese, the famous Knights of St. John, French, and British.

Today its a culmination of this history as found in the cuisine, culture and the architecture.

If anyone tells you that you can easily see all of Malta in just a few days, don't listen. Give this amazing little place at least a week to explore, particularly if you want to see more than just the main island.

Below you'll find all of our Malta travel posts including the best things to do, where to visit, guides to the different islands and much more. We spent nearly 2 months living in and travelling around Malta and we could've spent longer. We hope that the Malta travel blog posts below will help you plan your own trip to the country and make the most out of visiting Malta.

Ever wonder why Malta has always been one of the top European tourist destinations all year round? Are you one of those travelers who fantasizes about this perfectly sun-kissed tropical paradise? Well, dream no more. There are so many things to do in Malta END_OF_DOCUMENT_TOKEN_TO_BE_REPLACED

Cost of Living in Malta: A Guide For Digital Nomads

Due to Malta’s proximity to Italy and its location on the stunning Mediterranean Sea, you probably assume that Malta is an an expensive country to live in, but surprisingly, it’s not! Based on our firsthand experience living in Malta for two months, we can END_OF_DOCUMENT_TOKEN_TO_BE_REPLACED

A Digital Nomad Guide to Living in Malta

Is Malta a good place for digital nomads? What’s the wifi like in Malta? Are there cheap apartments in Malta? These are just some of the questions we had before deciding to pack up and move to this beautiful Mediterranean archipelago for two months. We END_OF_DOCUMENT_TOKEN_TO_BE_REPLACED

A Guide to The Best Restaurants in Malta

Malta may be a small island, but there are endless restaurants and a wide variety of cuisines to choose from. Finding the best restaurants in Malta is a bit of a task, as all eateries are not created equal. Whether you’re interested in a END_OF_DOCUMENT_TOKEN_TO_BE_REPLACED

21 Photos That Will Inspire You to Travel to Malta

Have you ever heard of the Mediterranean island nation of Malta? This is a country that both surprised and delighted us during our travels through Central and Eastern Europe. After doing some research we soon realized that: 1) There wasn’t much information available online from END_OF_DOCUMENT_TOKEN_TO_BE_REPLACED

The Ultimate Guide To Visiting Malta

We ended up visiting Malta and living on this tiny, beautiful archipelago for 2 months and from our experience we’ve put together this epic guide for a holiday in Malta. Somehow this small rock bobbing in the Mediterranean Sea has managed to stay off the radar END_OF_DOCUMENT_TOKEN_TO_BE_REPLACED

We hadn’t spent much time in Europe prior to our recent 5 month trip. And now, we’re hooked on this part of the world! Check out our latest video where we share some epic highlights from travelling through Istanbul, Bulgaria, Macedonia (FYROM), Albania, Bosnia END_OF_DOCUMENT_TOKEN_TO_BE_REPLACED

We left Europe just a couple of weeks ago, and apart from seeing some of the top places to visit in Greece, England and Spain in the past, this was our first big trip to the continent. Having now completed 5 months in the region, END_OF_DOCUMENT_TOKEN_TO_BE_REPLACED

Exploring Gozo: Our Sea and Land Adventures in the Maltese Archipelago

If there’s one time when Nick and I are bound to argue, it’s when we are in a kayak. We’ve paddled around Indonesia’s lakes in a dugout canoe, and argued about the fact that we were going in circles instead of a straight line. END_OF_DOCUMENT_TOKEN_TO_BE_REPLACED

If you’re like us, you may not have realized that the island nation of Malta is actually an archipelago, with three of the islands – Malta, Gozo and Comino – being inhabited. Malta is the largest and most developed of the three, while Comino only has END_OF_DOCUMENT_TOKEN_TO_BE_REPLACED

Living in Malta – An Introduction to Our Temporary Home

We’ve been travelling the world for almost 8 years, but somehow we’re the worst at planning. We always leave everything until the last minute – whether it’s booking our accommodation, deciding on which city to go to next, or even which country we want END_OF_DOCUMENT_TOKEN_TO_BE_REPLACED

When To Travel To Malta

You can really visit Malta at any time. We visited in the shoulder season from the end of March until the end of May and we had great weather. When the sun was shining, it was very hot, and on cloudy days we needed a light sweater or wind breaker.

In the dead of winter, temperatures average lows of 13°C and highs of 16°C, while in the middle of summer, it’s not unusual for the mercury to break the 40°C mark. Summer heat can be oppressive and most locals head straight for the beaches or out on the water at these times.

The absolute best time to visit Malta for weather is in the fall (September – October), when the weather cools, the sea is still warm from the summer heat and some of the crowds have left. The second best time is Spring (May – June). The sea is a bit cooler and hasn’t warmed up yet during the spring, but it’s still swimmable and the weather isn’t too hot.

July and August is the peak season, but it can also be uncomfortably hot in Malta at this time. This is also the time that Europe and the Maltese are typically on holidays, meaning that the country can be extremely crowded (particularly the beaches). But this is also the season for many festivals, concerts and events, so it's still a great time to visit.

We recommend the below companies to help you with your travel booking, planning and insurance. We recommend them because we personally use and trust them, but the links below are also affiliate links, which means we receive a small commission if you purchase products or services from them. It will never cost you extra and we appreciate your support.