Day 3 in Cape Town was a day Dariece has been waiting for for a long time. PENGUINS!! We headed out to Boulders Beach where a colony of 3000 penguins live. We arrived after an hour drive down the coast and Dariece was almost too excited to wait for me to buy tickets. She ran ahead and as we came around the corner on to the beach we were surprised and disappointed to see that there was none there. We found out that it is currently nesting season, so the only place to see the penguins was on the other beach where tourists are fenced off from their nests.

We were really looking forward to being able to get right up to them so we were a little disappointed as we headed over towards the tourist zone. Just as we were about to leave Dariece spotted one little penguin hidden under a bush about 4 ft from us. So cute. After staring/annoying that poor little penguin with pictures and awes, we headed over to the other fenced beach and sure enough there were hundreds of penguins everywhere nesting and sleeping on the rocks. They were really docile and would come right up to the fence to look at us.

It’s too bad it’s mating season otherwise we would be able to get in the water and swim with them!!! I was really looking forward to some shots of Dariece walking alongside a gaggle of the tiny waddlers but it just wasn’t our luck… oh well, it’s not like we’re not going to be in other countries with penguins and who knows, maybe we’ll see another colony in South Africa.

The next day we headed out early on my self-guided museum tour. I got the map out and circled a few of the main museums to see so we could try to get a feel for the history of South Africa before travelling through it. We like to learn some history in every country we go to but in South Africa there is so much to learn and it’s so interesting that I think we’ll still be reading about it after we leave the country. From the time the Dutch landed and settled here about 350 years ago until recently, South Africa has been plagued with cultural turmoil, slavery, racism, the apartheid (segregation), wars, drought and just about everything one culture can sustain.

It’s amazing how fast the people have leapt into a liberal, free and more equal state in the span of just a couple decades. For a nation that was once so divided, the torn seams of the racial fabric are slowly mending and although there is still a noticeable divide, the people of all races have found a way to live in harmony with each other.

We notice the divide between races mostly in the activities that the populations take part in. Although 85 percent of the country is black, at any pub, winery, surf shop, or upscale shopping mall, the majority of people we see are white. While at grocery stores, gas stations and small shops the people are generally black. The split now seems to be strictly economic instead of racial and unfortunately the line drawn still appears to cut the country into racial sections.

The museums we visited explained this and much more but it’s really speaking with the Afrikaaner (Dutch descent South Africans) and the English South Africans (British descent) that helps give us a feel for the past and present evolution of the country and its people. What we found interesting was that talking to the people from those two groups is that they seem to have had more conflict with their white counterparts rather than the African people. There is so much we have learned both on our museum trips and around the campfire with locals that I could go on and on, but basically the museums were a good intro and the locals have helped fill in the blanks since.

The next day we headed out in the car on another adventure. We got some directions from the locals at our Backpackers (hotel) and headed through Hout Bay and over Chapman’s Peak, one of the most scenic drives in South Africa. On the way out of Cape Town, we stopped at the harbour to see a family of blubbery fur seals lazing on the docks yawning and snorting as they woke up with the rising sun. We haven’t seen seals too often and these ones let us get pretty close to them. They were comical enough to keep us watching for almost an hour before hopping back in the car and starting our drive south.

It was an outstanding drive, we cruised along a road cut out of the massive, jagged rock cliffs perched on the edge of the Atlantic Ocean. Each time we came around the corner we were shocked by another perfect panorama.

The drive ended at the Cape of Good Hope which was our first South African reserve. It’s mostly just for hiking but we were told we may be lucky and see some antelope or maybe even zebra. On the way to the start of our hike in the reserve we spotted some ostrich and antelope. They were pretty far in the distance but with the zoom lens we were able to get some okay pics of them. Our first African wildlife spotting!!!

A good start… we had our eyes pealed for zebras but arrived and started the hike without a sighting. We did the Shipwreck Trail which began on a gorgeous white sand beach for about 3 km before cutting inland and through some typical brush and rocky hills before looping back to the parking lot.

Right at the end of the hike we noticed something slowly moving near the garbage can…a huge tortoise! A great ending to our walk. The hike was stunning and our first taste of an African trail was perfect, we can’t wait to do more hiking throughout the country as it is geared so well towards it. After our hike we got back in the car and headed down towards the Southern most tip of the Cape. On the way we were talking about something random when mid-sentence Dariece yelled ZEBRA!!! I slammed on the breaks and we both hopped out of the car and got a couple decent pictures of a pair of zebras lazing in the grass. It was our lucky day I guess because large animals aren’t sighted often in this area. We got back in the car and drove to the tip of the Cape to enjoy the views from the lookout to see “where the two ocean currents meet”. It’s not the Southern most tip of Africa, but was a beautiful view. We enjoyed our 5 nights in Cape Town and were ready to take our little Chevy Spark into the Winelands. 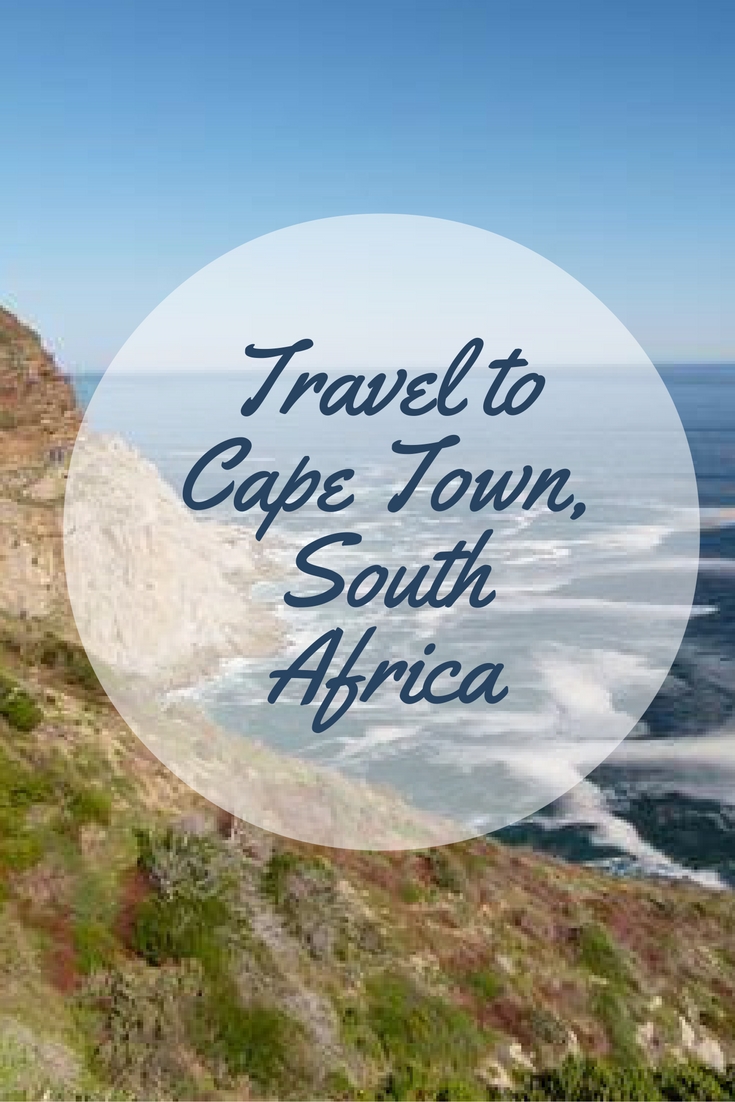 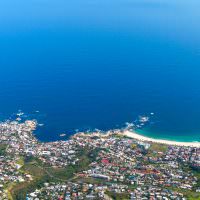 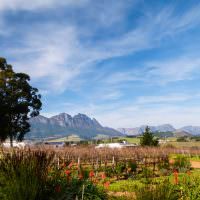