Must-Have Experiences in The Wine Region of Georgia

No trip to Georgia is complete without spending some time in the Kakheti region, better known as Georgian wine country! Located in eastern Georgia, Kakheti can be visited on a day trip from Tbilisi, but make sure you spend some time in the country’s beautiful capital before taking off on your side trips. Tbilisi has much to offer travellers!

If you love wine (like us!) you should try to spend at least a couple of days exploring the Kakheti region. We spent two nights each in Sighnaghi and Telavi, which were perfect hubs for day trips.

Here are our top experiences you can’t miss while visiting the Kakheti wine region.

1. Strolling the streets of Sighnaghi

Sighnaghi is the Kakheti region’s most picturesque town, reminiscent of a hilltop village somewhere in Italy. The cobblestone streets and old city walls are perfect for strolling around on a lazy afternoon. Sighnaghi is the perfect place to relax for a couple of days, with a great range of places to stay, restaurants and cellar doors.

There are a few cellar doors spotted around Sighnaghi, including Pheasant’s Tears (18 Baratashvili Street) and OKRO’s Natural Wine Restaurant (7A Chavchavdze St). The best part? You won’t need a designated sober driver! Spend half a day wondering from one to the next sampling the local wines. 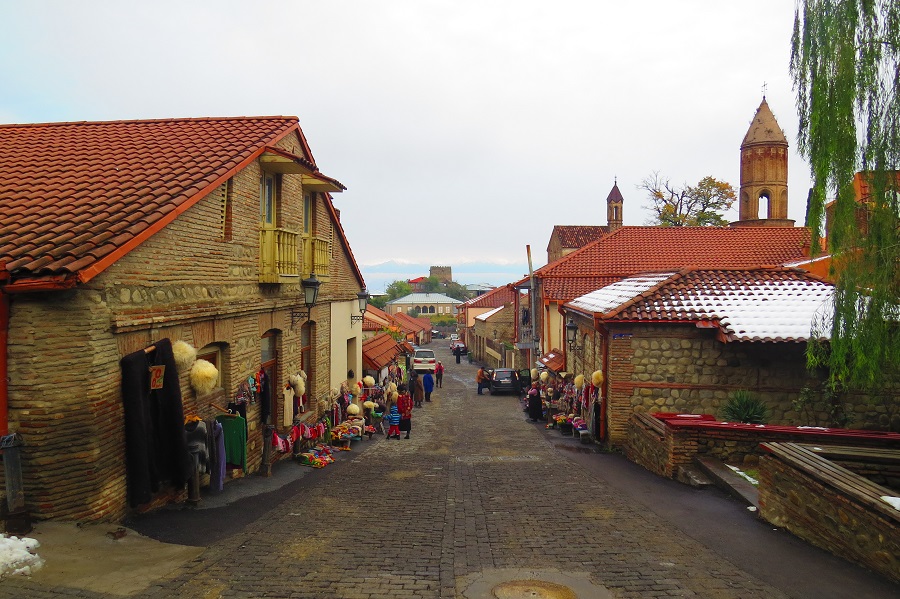 If possible, we recommend hiring a car to explore Georgia’s wine region, which is surprisingly affordable. However, if you’re not ready to share the road with Georgia’s crazy drivers, there are pubic transport options.

From Tbilisi – catch a marshrutka (minivan) from the Navtlughi Avtosadguri bus station, 300m west of the Samgori metro station. There are 6 services a day to Sighnaghi. The journey will take around 2 hours. Tickets costs 6 GEL ($2.50USD). The bus will drop you in the main square of Sighnaghi.

From Telavi – there is one marshrutka per day to Sighnaghi (Monday to Friday only). The bus departs around 3pm. The journey takes around 1 hour and costs 5 GEL ($2USD). This service is notoriously unreliable so confirm departure times in the morning.

2. Enjoying the Views From Bodbe Monastery

The Bodbe Monastery, 2km from Sighnaghi, not only offers stunning views but is also the final resting place of St Nino. You will undoubtedly hear about the revered St Nino during your time in Georgia. St Nino was responsible for bringing Christianity to Georgia, making Bodbe Convent a place close to the hearts of many Georgians.

Originally built in the 9th century and modified numerous times since, the location of this Monastery is as much of a drawcard as the building itself. Located amongst beautiful trees on the side of hill, the Monastery offers incredible views across the valley with a backdrop of spectacular snow-capped mountains. 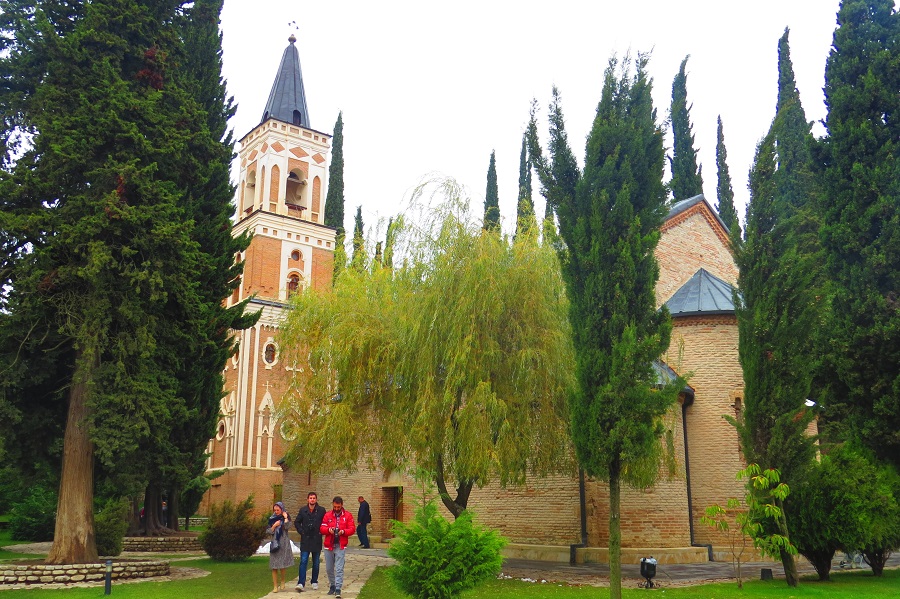 Weather permitting, the walk from Sighnaghi to Bodbe Convent is a beautiful one. Located just 2km south-east of Sighnaghi, you follow the road out of town past the Tourist Information office. The route is pretty well signed, but if you get lost just ask a local for directions. Make sure to stay well off the road as the drivers can be slightly crazy! You can also catch a taxi. The return trip should cost no more than 20 GEL.

For details on getting to Sighnaghi, see ‘Strolling the streets of Sighnaghi’ above.

3. Getting a history lesson at Chavchavdze Estate

The beautifully restored 19th century palace and sprawling grounds of Prince Alexander Chavchavdze (entrance 5 GEL) offer a fascinating insight into the life of one of Georgia’s most influential figures. Alexander was a wealthy and well educated noble, fluent in multiple languages and credited for bringing the ideas of the Enlightenment to Georgia.

He was also a renowned poet, diplomat, translator, soldier, winemaker and businessman. Alexander participated in many significant battles during his military career, including a campaign against Napoleon’s army in France from 1813 to 1815. He died tragically after falling under a carriage in 1846. 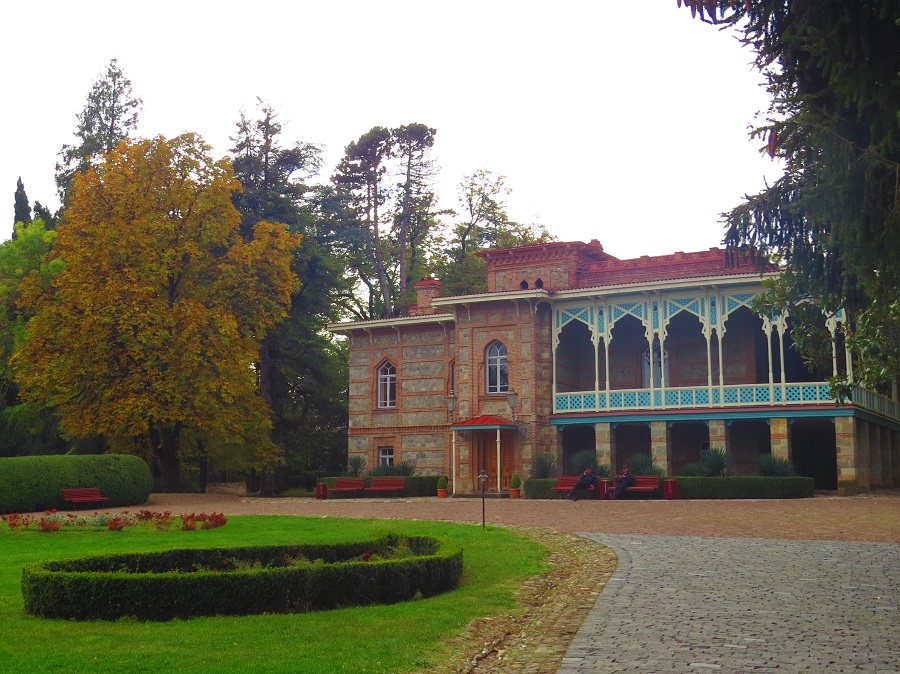 In 1854, Muslim separatists sacked the village of Tsinandali and stormed the estate. The rebels took 23 hostages, demanding a huge ransom. The Chavchavdze family had most of their property destroyed or stolen during the raid, and was forced to borrow money to pay the ransom. Eventually, unable to make repayments to lenders, the estate was relinquished to the state.

The estate is now functions as a museum, conference centre and small art gallery. Your entry ticket includes a tour with an excellent English speaking guide, who will explain the fascinating history of the estate and the Chavchavdze family. After the tour, head down to the wine cellar for a glass of local wine. 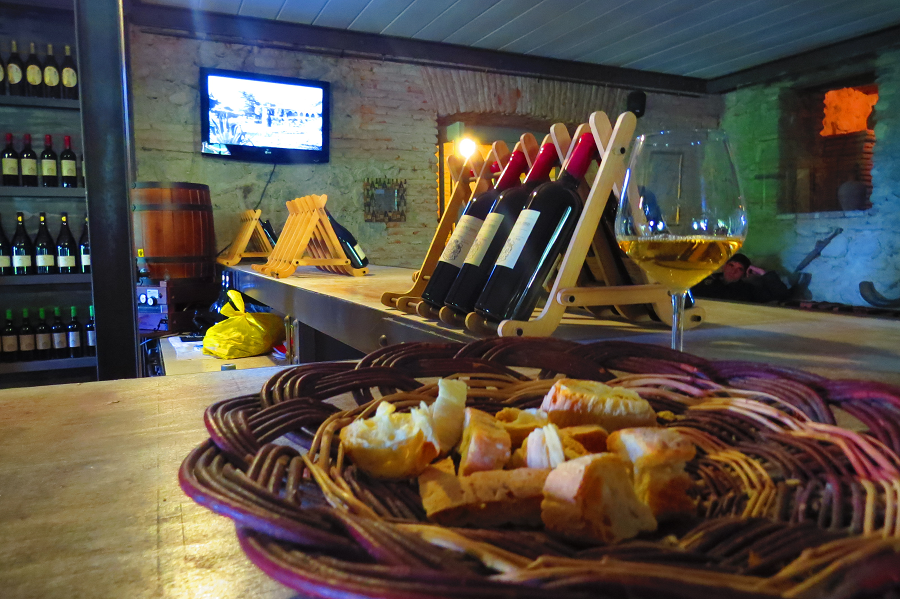 The estate is located in the village of Tsinandali, around 10km from Telavi. A return taxi including waiting time should cost no more than 15GEL ($6USD).

Telavi is easily accessed by public transport. From Tbilisi, catch a marshrutka (minivan) from Ortachala station, 2.5km southeast of Tbilisi. Departures leave every hour between 8am and 6pm, the journey takes around 2 hours and costs 7 GEL ($3USD).

From Sighnaghi, there is only 1 marshrutka to Telavi per day (Monday to Saturday). It departs at around 9:15am in the morning, takes 90 minutes and costs 4.50 GEL ($2USD). We recommend confirming departure times with your guesthouse.

4. Tasting Wine in a Georgian Vineyard

This method of winemaking sees wine fermented and aged in large clay pots buried in the ground, rather than in wine barrels. Here are a few of our favourite wineries where you can learn more about Georgia’s ancient winemaking traditions, and partake in a few wine tastings:

• Shumi Winery – 8km east of Telavi (next door to Chavchavdze Estate), Shumi offers a great free tour and generous wine tasting. Shumi began bottling its own wine in 2001. The logo of the company is a griffin, which according to ancient legend brought the first bunch of grapes to earth. Nowadays it’s a fantastic vineyard with a small but fascinating museum. The English-speaking guides were incredibly friendly, and the free tasting included 4 wines and a chacha – you can’t beat that value! 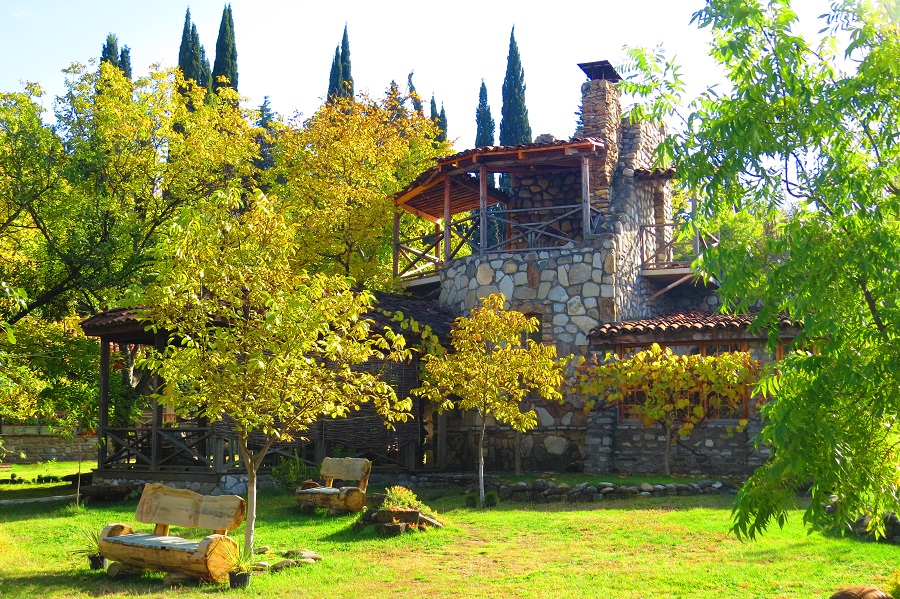 • Schuchmann Wines Chateau – located 10km east of Telavi, this stunning chateau offers tastings starting at 15GEL for 3 wines. You will be offered a tour of the facility and your tasting will be accompanied by a skilled staff member happy to answer any questions. The restaurant also dishes up some amazing Georgian cuisine at surprisingly reasonable prices.

• Pheasant’s Tears – located in the heart of Sighnaghi, Pheasant’s Tears offer some of the region’s best wine along with an amazing restaurant. Stop by for a tasting with their knowledgeable sommelier and then hang around for the delicious Chef’s Selection menu for dinner. A little pricey but worth the splurge. 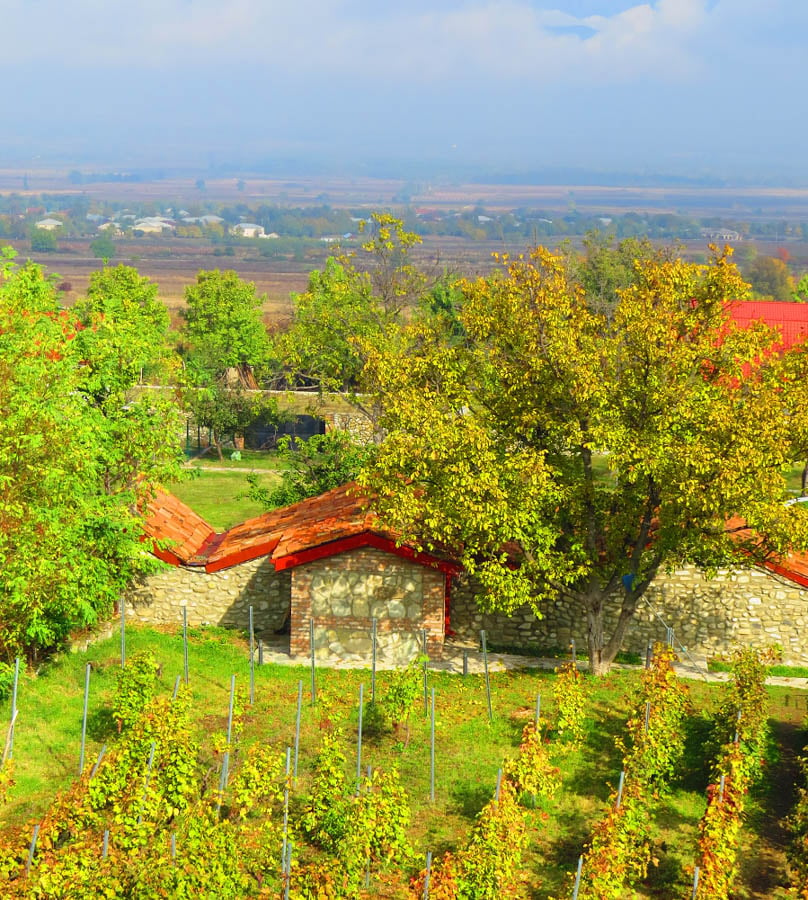 Getting to the wineries:

Shumi Winery and Schuchmann Wines Chateau are both located close to Telavi, and are easily reached by taxi. Some guesthouses in Telavi also offer bicycle rental. Pheasant’s Tears is located in the centre of Sighnaghi (18 Baratashvili Street), so you can easily walk. Most guesthouses in Sighnaghi and Telavi can also arrange wine tasting tours – expect to pay around 100GEL for a full day tour (excluding tasting fees).

For information on getting to Sighnaghi and Telavi, see ‘Strolling the streets of Sighnaghi’ and ‘Getting a history lesson at Chavchavdze Estate’ above. 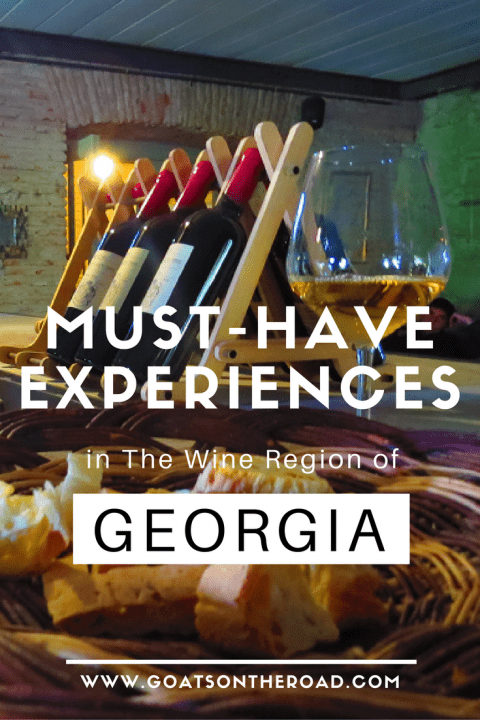 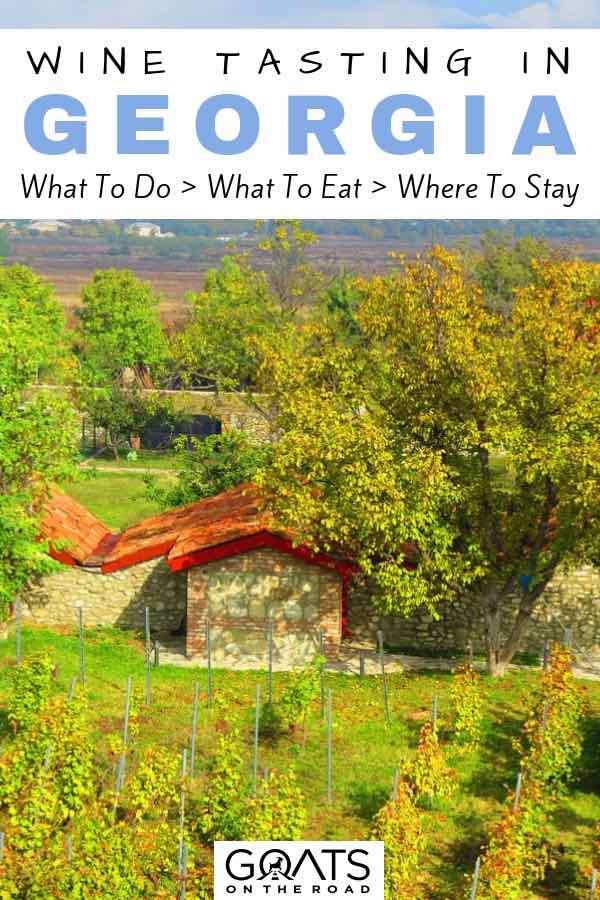 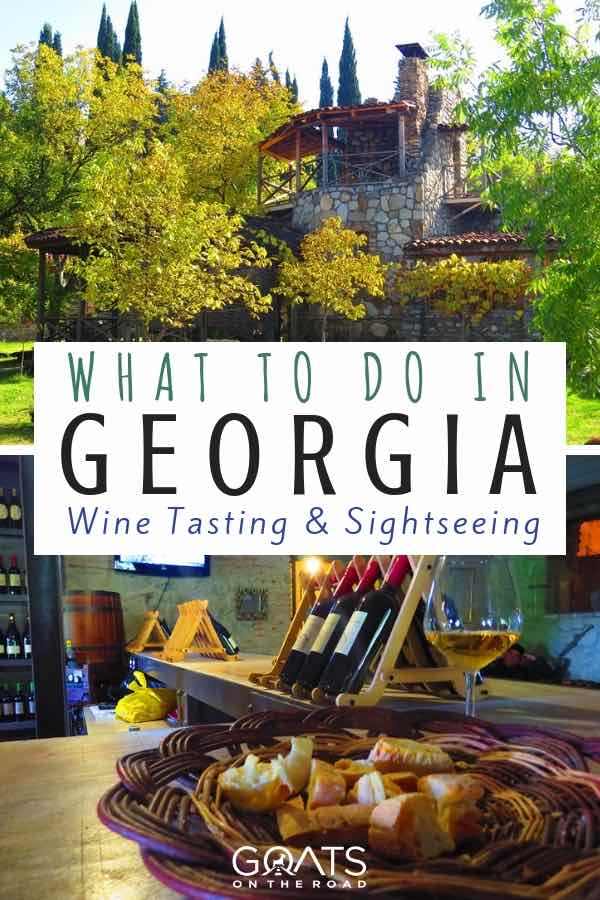 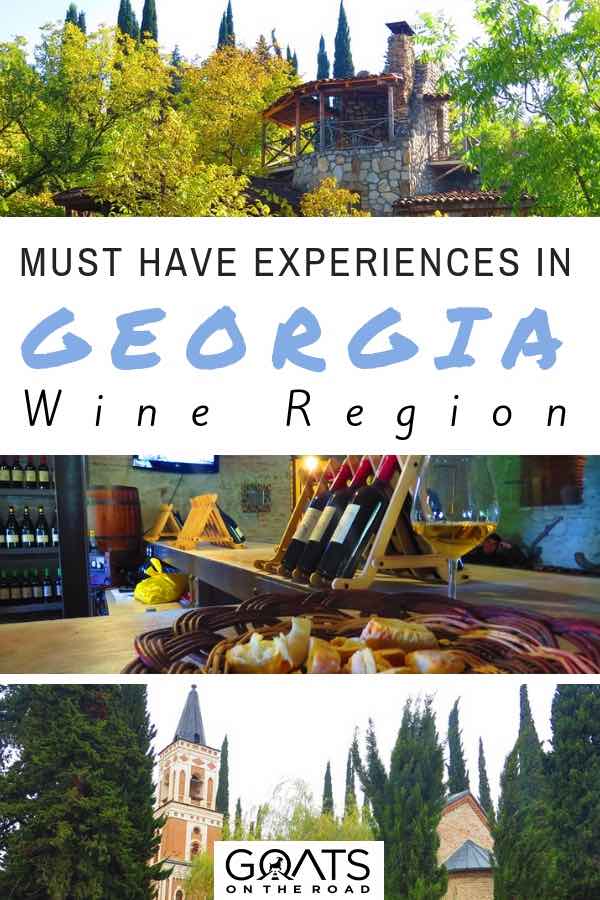 Tom and Katherine are the Australian couple behind The Travelators. They've been backpacking the world together on-and-off since 2007, juggling their love of travel with study and work at home. Their blog is all about taking career breaks to travel, and exploring the world on a budget. They've visited over 60 countries so far across Europe, the Middle East, the Americas and Asia – and they're still counting!