Backpacking India: Our Trip to Delhi

We flew to Delhi, preparing ourselves for the worst kind of hectic. This would be our third time backpacking India and somehow, on the previous two visits, we had managed to avoid this infamously chaotic city. Even India veterans have told us that Delhi is the epitome of everything that is bad in India.

It’s an impossibly packed population plagued with poverty, pimps and putrid pollution. A sick, unsanitary city soaked in smoke, slime and sex. A chaotic catastrophe caught in the commotion of crime and corruption. A helpless hell of hectic heckling, harassment and hollering. A dense destitute disaster drenched in dirt, disease and deformities.

This is Delhi, we were told. This is the end of the world… and we loved it!

Landing on the tarmac at Delhi International Airport, we were already prepared for the worst. But just being back in a polluted big city of India paradoxically felt like a breath of fresh air. Landing in India always feels like your being thrown into a mosh-pit of true travel. Things come at you from all angles and, if your ready for it, it makes for one of the most exciting countries to travel in.

To explain India with an endless stream of adjective alliterations is to describe it in vein. In India that chaos that drives you to distraction becomes something that you crave rather then despise. People ask us why we travel to India when it’s so insanely different, but isn’t that why everyone travels? To find something different from home? To find something new and exciting, or to just escape the sometimes mind-numbingly monotonous normality of work and sleep that we often fall into at home?

We all need something different sometimes, something to shock our senses and Dariece and I have seen some crazy things while backpacking in India. We’ve seen beautiful wedding processions with full orchestras stop traffic for hours. We’ve seen some of the poorest people in the world offer their lunch to wealthy tourists.

We’ve seen two dogs fighting over a severed human hand, and we’ve seen a cow give birth on the street. I thought we had seen it all, until one day, while walking down the streets of Delhi, we were shocked to a standstill as a homeless teenage girl past us by. Sadly, this is something we see all the time in India so it was not her that had amazed us. The girl was casually strolling along, dragging behind her a full grown, dead dog. She crossed the street without looking and all the traffic stopped for her as she pulled the stiff, furry corpse across one of the busiest streets in Delhi.

We had originally thought she was just walking the poor animal around town like a stuffed pet, until she reached the other side of the road and hoisted it into a garbage can before disappearing behind the ensuing traffic. Dariece and I appeared to be the only people phased by this morbid scene. Others simply went about their business with little more than a curious glance. We named the dog Rigamortis Rex and will forever remember his sadly unceremonious funeral procession that passed us by in downtown Delhi.

Delhi was hectic sure, but amongst all the noise and pollution, there are people who we could all learn from. Men who make two dollars a day cycling citizens through a dizzying maze of traffic and smog still smile and wave at you as they buzz by. Store keepers who spend their day on the street trying to careen potential customers into their shop, deal with rejection like champions.

Customers constantly mumble no thank-yous as the Store keeper smiles and wags his head with a simple “okay”. And complete strangers strike up conversation with you just because they are curious and friendly. It was one such stranger who we met outside of a Sikh temple who really reminded us of what is great in India.

He saw us curiously peering in through the gates outside, taking photos of the massive, ornate structure, when he excitedly hurried over to invite us in. He showed us where to put our shoes and wash our feet before climbing the stairs towards the prayer room. He tied a bandanna on my head and explained why Sikhs touch the floor of entrance ways before entering their temples. He sat with us and explained what all the music meant and why people pray to a massive book perched on a bed in a glass case.

He hurried us outside and into the kitchen in a separate building where dozens of people prepared dahl, veg curries and chapattis for a lunch that was to feed up to 90,000 people, for free. A lunch that the Sikh temple serves everyday, and does so with donations and volunteer work. He explained that Sikhs don’t care what religion, race or faith you may be, everyone should be allowed to eat, and everyone should be allowed to enter their famously beautiful temples. At the end of his energetic “tour”, instead of asking us for money, he ran out on to the street and came back with 3 teas and a gift for us. A holographic picture of Om (Sanskrit Peace) for us to hang on our wall. With that he vigorously shook our hands and waged his head good-bye, then he took off back into the depths of India.

Instead of leaving the temple, we decided to go back to the kitchen and help roll chapattis (thin Indian style bread) We spent more than an hour at the chapatti table until lunch began, at which point we sat with the Indians on the floor, ate the delicious curries and bread with our bare hands and chatted small talk about Canada and our travels with the friendly, smiling people around us.

We really, really enjoyed our time in Delhi – and we may be some of the only people to ever say that!  It was a very typically Indian city with friendly people.  We were trying to decide where to go for Christmas and came up with the “pink” city:  Jaipur.  So, we boarded a train and made our way to the state of Rajasthan. 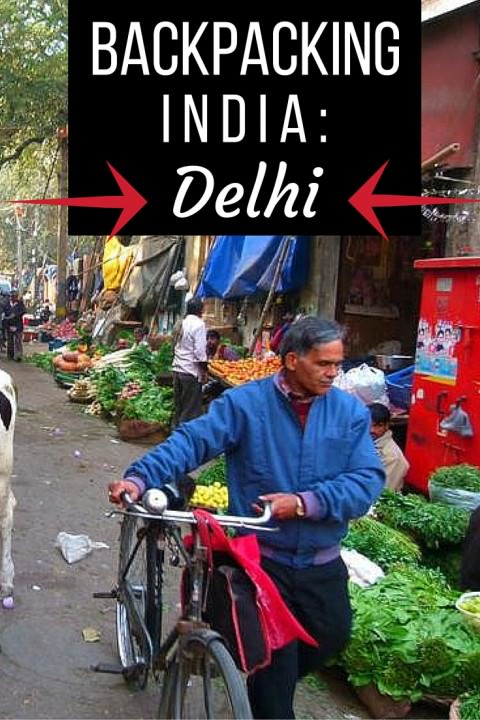 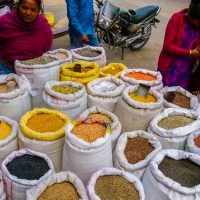 Pokhara, Nepal: Coming Back Down To Earth 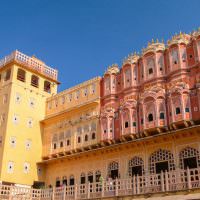 9 thoughts on “Backpacking India: Our Trip to Delhi”