We could hardly contain our excitement as we waited on the pier for the next lancha (boat) to take us from our Santa Cruz home to Panajachel. This was the start our journey to Havana, Cuba. A part of us was sad to say goodbye to Guatemala and we had really loved our two month’s stay on the lovely Lake Atitlan…but, we’re travellers and were ready for a change of scenery!

This trip was going to be a holiday for us. With the hassles of finding internet in Cuba, and with the prices of connection per hour being so high, we decided to take some time off. We worked hard to prepare all of our freelance articles and articles for our site prior to departure, scheduled some social media posts and sent out the necessary emails.

We were going offline!

It was a long journey from Santa Cruz to Panajachel to Guatemala City to Panama City to Havana, but as our plane touched down at the airport, we were officially on vacation. This trip was all about being travellers – not bloggers and travellers, just regular travellers. We still planned to take photos and make videos, but with no deadlines for articles, no distraction from social media or needing (wanting) to check emails, we would be able to relax and fully enjoy the sights, sounds and smells around us.

The arrival hall at the Havana airport was a complete mess. People were everywhere looking like they were lost and there were huge line-ups for immigration and security. Luggage was stacked randomly all over the airport and the baggage conveyor belt was moving at a snail’s pace. There was no air conditioning in the building and the late afternoon humidity was so thick that we had trouble breathing. Our skin was sticky and moist and we had no water to drink. We had been in transit since 5:00 am that day and were in desperate need of a shower…

But all of that didn’t matter, we were in Cuba! No amount of heat or baggage annoyances could get to us, our spirits were high and we were so excited to be in the Caribbean.

The airport is located about an hour outside of Havana and lucky for us, our taxi driver was able to speak some English and could tell us a bit about various buildings and areas as we drove into the city. Old cars from the 1950’s passed by, horse-drawn carts shared the road, and as we pulled into town, we were in awe of the crumbling, colourful buildings all around us.

This was the Havana we had pictured.

Our driver knew exactly how to get to our casa particular (homestay) and we were greeted by a smiling Fina and her husband, Daniel. We had planned to stay at casa particulars all around the country. For a fraction of the price of a hotel, travellers can stay with families and have your own private room and bathroom in Cuba. They have breakfast and dinner available (if you want), but the best part is that you’re treated like family and are able to stay with local people and talk to them about your country, while learning about theirs. This is also a great way to help put some money into the Cuban’s pockets, rather than the Government’s.

We hauled our bags up the steps to the second level home, and once the door opened, our jaws literally dropped. The casa was beautiful! The walls were painted a pastel peach and yellow, while the ceilings were 5 meters high and rimmed with a very ornate crown moulding. There was a huge living and dining room, a kitchen available for our use and a small outdoor seating area. Our bedroom was large with two beds, a dresser, air conditioning and a private bathroom.

We thought that the family shared the home, but then we found out that they own the whole floor and their private home was directly across the hall. The four rooms in our side of the casa were for tourists and we were in good company with some Canadians, Spanish and Swiss travellers.

Fina spoke English and we were able to get some ideas from her about where to eat and what to see near the casa. We also had numerous questions for her regarding our personal safety, and the safety of our belongings while in the city. In Guatemala, even though the villages on Lake Atitlan are quite safe, walking in-between most villages is pretty much a no-no as the chance of being robbed is fairly high. When we were in Guatemala City (where crime, robbery and murder are shockingly frequent) we had to stay in a gated community for the night, and even though the airport was only 1 km from our hostel, it was still necessary to take a taxi there to avoid being mugged!

We felt totally safe and secure while living in Santa Cruz/Paxanax, and while travelling in Antigua. But still, Latin America is known for its awful crime and high homicide rates.

Travelling to Cuba was a breath of fresh air. No longer did we have to worry about our belongings and our personal safety. This Caribbean country prides itself on being a safe place for travellers, which is amazing considering it is surrounded by some of the most dangerous countries on Earth..

Carrying around our camera was no problem (even at night), and walking home at midnight down dark alleyways was fine, as everyone was out and about until 11:00 pm or midnight each night… even families. Fina told us not to worry about anything – at most, just keep our camera in our bag, rather than on our shoulder late at night.

We soon found out that part of the reason that Cuba has such a low crime rate is the CDF (Committees for the Defense of the Revolution), which is like a community watch that exists in every town and village. 95% of all eligible Cubans are members of this group and while it may go against some basic privacy rights that we take for granted in the west, it does keep the crime rate down to a minimum.

Our new host Fina didn’t go into this much detail about safety in Cuba, but she didn’t have to. We already felt safe just by gauging the energy outside. After gulping down a welcome drink of bright pink, fresh guava juice, we were ready to hit the town. It didn’t matter that we had been travelling for a long time and were hot and sticky, we opted out of having a shower. Instead, we just dumped our bags on the floor and basically ran out of the casa to explore the vibrant city of Havana.

Stay tuned to hear about our week spent in Havana – complete with photos and an exciting video!

A special thank-you to Casa Daniel y Fina, aka, Casa Habana Blues 1940 and Hostels Club for hosting us during our stay in Havana. As always, all thoughts, opinions and reviews remain our own, despite any complimentary services received. 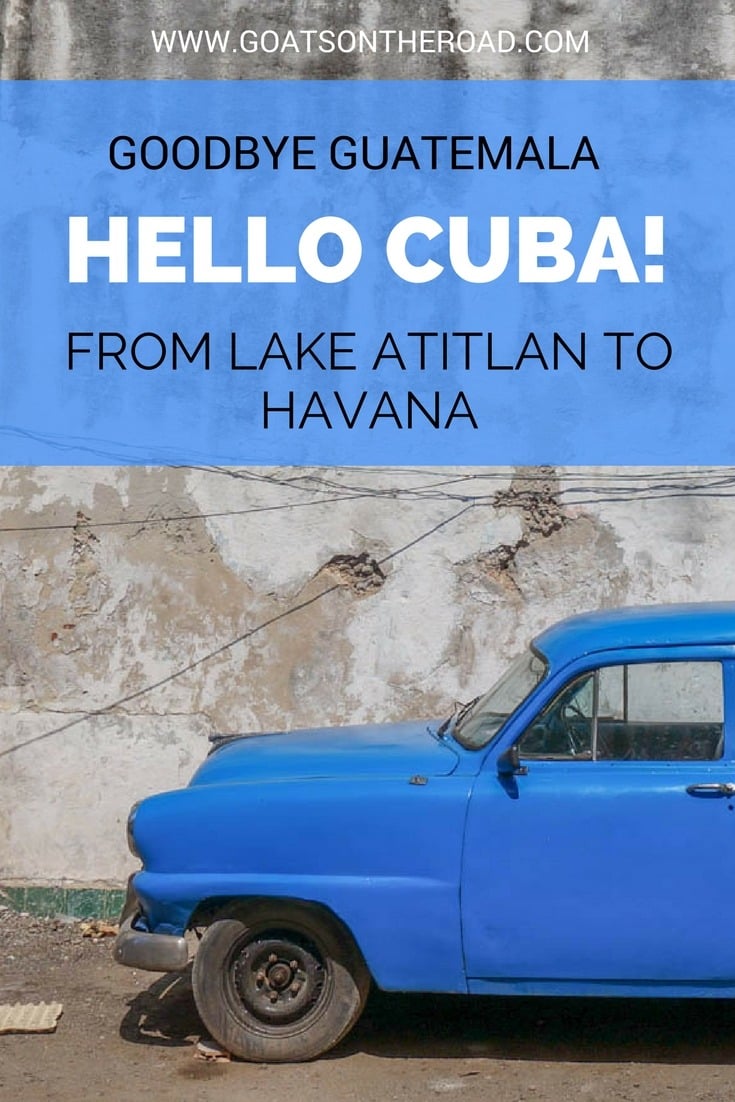