Shortly after starting our teaching jobs in China at Shane English School in Yangzhou, we met our friend Standy. Standy’s job is to provide the foreign teaching staff with full time assistance. Not long after he started, we all realized that he was going to be our good friend as well.

*Teaching English in China was one of the best years of our lives. These days, however, if you don’t want to, you can also teach English online with VIPKid and earn money from anywhere in the world*

Standy’s Chinese name is Wu Wei ( 吴伟). His English name is quite different (like many Chinese people who have chosen English names), but Standy’s name has a background. He once had an English professor who he really admired. His professor’s name was Stanley and when Standy was choosing his English name he figured he would honour his professor by taking his name. But he didn’t want to take his exact name.

He had always liked the word on his mobile phone “Stand-by”, but for some reason he thought it was pronounced Standy. He decided to name himself Standy. We still call him Stand-by sometimes because he is always on stand-by, ready to help us.

Standy is hilarious and he always comes up with funny sayings that stick in our group. We take him out for dinners occasionally to thank him for all of his help. In fact, he’s been told by our boss that it is his job to befriend us, so if he doesn’t want to come out, we just say: “You have to. It’s your job Standy”. Although he’s paid to help us, we cherish his friendship more than his assistance.

I think other teachers who work abroad would be amazed at just how much help Standy gives us. If we need to reserve train tickets, exchange money, book flights, pay bills, buy stuff online or just order a meal, Standy is on call 24/7 (although we’d never call him in the middle of the night).

When we tell Standy how much we appreciate all of his hard work, he simply replies: “I know… I’m a legend”. If he doesn’t agree with something, he always says “that’s illegal”.

Standy is not only our friend and helper, but he’s also our Chinese teacher. I frequently text him “how do you say _____” and he replies quickly so that I can order my desired dish or get out of a typical communicational jam. I once asked him to teach me how to swear in Chinese and he said: “that’s illegal and you are such a gentleman, why do you want to learn such things.”

There are times when we are capable of doing things ourselves and we complete tasks without his help. When we tell him later he seems genuinely proud of us. He once said: “You are an awesome genius. Good job!”

When we complain to Standy about the differences between business in China vs business at home, he simply says: “This is the peoples republic of China… it’s a journey.”

One day, Standy came into work wearing a nice blazer and I told him he looked good. His reply was: “It is not a secret that I am a handsome man.”

Standy’s laugh is unbelievably contagious and when he gets going, the whole room will erupt in laughter. Sometimes when the office is completely silent, someone will tell Standy a joke and his laugh will break the silence and start everyone else laughing with him.

We’ve made a lot of friends coming to China but Standy is one Chinese friend that we will never loose touch with. He is a really cool guy and we’re very lucky to work with him and even luckier to consider ourselves his friend. All of the foreign teachers joke that we don’t know what we’d do without Standy and it’s true. He has helped to make China a better place for us to live and he’s helped us understand it better. We’ll always remember our friend Standy.

10 REASONS WHY LIVING ABROAD IS AWESOME! 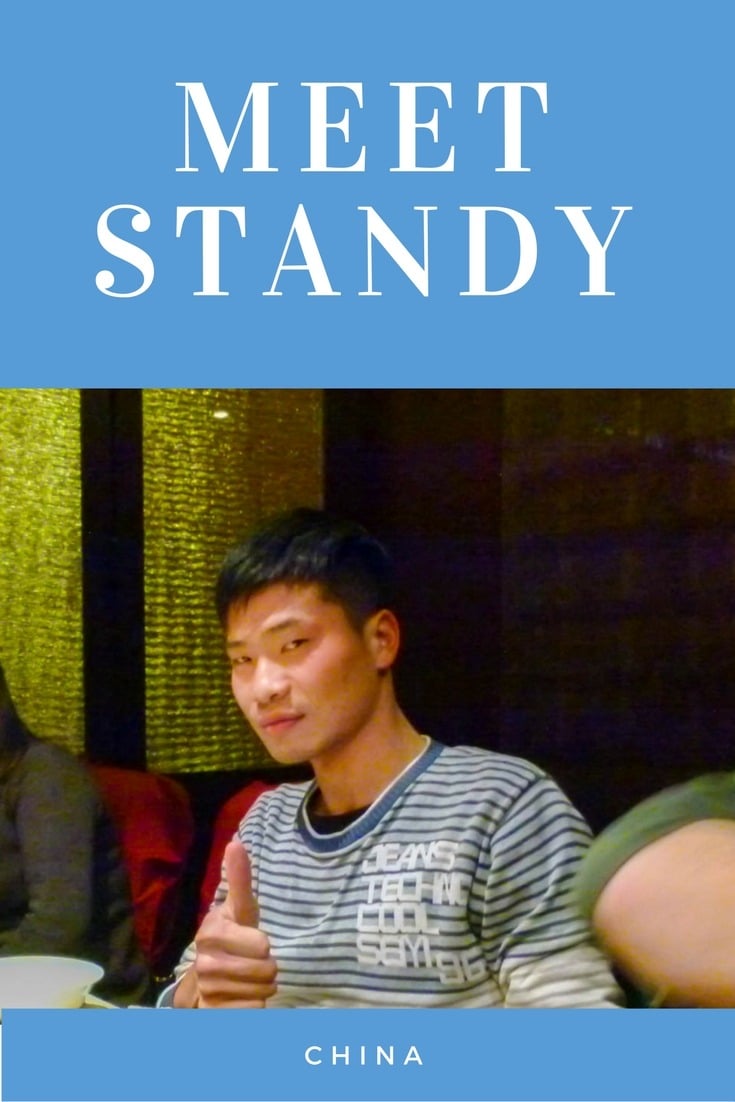