Have you ever considered backpacking through South Africa but thought it would cost you too much money?  Well, think again.  This is a backpacker’s haven.  Yes, some excursions and things along the way will cost you a bit more than other countries, but the value for money in this country is amazing!  If you’re from Europe or North America, you will find the cost of travelling here to be cheaper than at home.

How Much Will South Africa Cost?

This amount includes renting a car, paying for petrol, going to National Parks, buying groceries at the supermarket rather than eating at restaurants, drinking beer & wine and staying in nice backpackers accommodation.

The backpackers (guesthouses) in South Africa are some of the best accommodation you will find anywhere in the world.  They have all the amenities a backpacker could dream of, and more! A double room with great facilities will cost you anywhere from $30 – $50.

Restaurants in South Africa have the standard western price tag attached to their menu.  What most budget backpackers do is buy groceries at the supermarket (Pick n’ Pay being the most popular) and make meals at the backpackers.  As an example: a pack of 4 chicken breasts costs $1.50, traditional South African sausages cost $5 and cheese is about $3 for a block.  The grocery store pricing is much cheaper than the prices in North America.

If you’re heading up to the more popular Kruger National Park, expect to see many other vehicles trying to spot wildlife.  If you want to do an exciting, less popular safari, check out Addo National Park, Umfolozi National Park and the St. Lucia Wetlands.  You even have the option to do a self-drive safari, which we highly recommend!  Check out this website for information on South Africa’s National Parks and entrance fees.

Booze is cheap in South Africa.  Wine is about $5/bottle at the grocery store and local beer is cheap at the backpacker bars, about $1.50/bottle.

Places to See in South Africa

Cape Town: Beautiful Cape Town is South Africa’s crowning jewel. Hugging the sea with the towering table mountain at it’s core and the charming harbour area, it can be hard to leave this city.

Stellenbosch: Who wants to go to South Africa without trying the wines? Stellenbosch and the Robertson area are the perfect places to head out on a wine tour and sample some of the countries finest grape varieties. Make sure you stick around a while and check out the town of Stellenbosch itself, which offers historical buildings and a fun young vibe. For all you need to know about travelling to Stellenbosch, check out this useful Stellenbosch guide.

Addo National Park: Our personal favourite national park in the country, Addo has tons of elephants, some zebra and a few lions. It’s much quieter and easier to navigate than Kruger and you just feel like you’re in the wild.

The Wild Coast: Probably the most scenic region in all of Africa, the Wild Coast is absolutely breathtaking. Make sure to stop at Port St. John’s and Coffee bay.

Want more? Check out The Crazy Tourist for 15 awesome things to do in South Africa!

What Is The Budget Accommodation Like In South Africa?

The budget accommodation in South Africa is called “backpackers”.  Usually it’s someone’s home that they have converted into a guesthouse.  Some places have only 2 rooms, others have many rooms.  There’s typically a communal kitchen, shared bathroom facilities, a bar and restaurant area and usually some sort of yard.  These backpackers are  funky and have a really fun vibe.  You’ll meet many local and foreign travellers if you stay at them.    Another option is to pitch a tent in the yard.  Many people do this.  It costs much less and you still have the option to use the bathroom, kitchen and other amenities.

**Goat Note: Free booklets are available at the grocery stores and at the backpackers called “Coast to Coast”  and “Alternative Route”.  These are what you will use in order to find your backpacker/hostel accommodation.

Should I Rent A Car In South Africa?

YES!  The only other option for getting around in South Africa is either buying a vehicle, taking the Greyhound Bus or taking the Baz Bus.  The Baz Bus goes between the more popular cities, departing on specific days and only dropping travellers off at designated ‘backpackers’.  This isn’t ideal and doesn’t allow you any freedom or room for spontaneity.

**Goat Note:  You can rent a small Chevy Spark car online at carhire3000 online for as little as $20/day including insurance and drop-off fee in a different city.

Sprawling grasslands, well marked trails and an abundance of wildlife are what you’ll find in the National Parks in South Africa. Check out Addo Elephant, Umfolozi, St. Lucia Wetlands and Kruger Park. We highly recommend doing a self-drive safari, it’s so exciting to come up to a pack of lions or a herd of elephants and and be the only ones around!

Each day you will come across some sort of exotic wildlife, whether it’s a bird, a zebra, a snake, a penguin or a lion!  There’s always something beautiful to see.

The people of South Africa are very hospitable and adventurous people who are knowledgeable about their country. If you need directions, someone to have a beer with or if you’re looking for somewhere great to go, just ask a local!

The food is much more diverse than the rest of Africa, with Michelin starred restaurants, Indian & Dutch influences and western standards.

Stunning backdrops, delicious wines and free tastings at most wineries!

From the wetlands to the coast to the mountains, this place has it all. Take a drive and see all of the gorgeous areas of South Africa.

This is an adventure junky’s paradise! You can cage dive with Great White Sharks, jump one of the highest bungee lines in the world, sky dive, parasail, zip-line through the jungle, whale watch, scuba dive, surf and the list goes on and on!

Cons Of Travel In South Africa:

No matter how great a country is, there will always be a few cons to go along with the pros. South Africa is so full of amazing experiences, but there are a few things to watch out for.

There aren’t many cons to travelling here, but the few that stand out are listed below.

The discrimination between the Afrikaners (Dutch descendants), the English and the native South Africans is still prevalent even today. Make sure you visit the District 6 Museum and others like it in Cape Town to gain a better understanding of this awful topic.

You can take the Baz Bus, the Greyhound bus, buy a car or rent a car.  However, all of these options are quite costly and not exactly budget backpacker friendly.

Johannesburg and Cape Town have some of the highest crime rates in the world.  Be cautious when travelling in these cities, and any of the other big cities in South Africa.  Don’t keep your valuables on you when walking around, take a taxi at night and lock your car doors when driving.  Never stop for a hitch-hiker or someone else appearing to have car trouble, 9 times out of 10 it will be a set up and you’ll be robbed or car-jacked.  Having said all of that, we spent 5 weeks driving through this country and didn’t have a single issue.

Types Of Other Travellers & Backpackers:

The people who are travelling through South Africa, or Africa in general, are usually more mature than travellers in other parts of the world.  Most travellers are about 25 years of age older.  The travellers you’ll meet while backpacking are typically from South Africa (the English & the Dutch descendants), Europe and North America.  You’ll also find many people doing volunteer work.

A 90 day, free visa on arrival is available at land border crossings and at airports for nationals of the EU, the USA, Commonwealth countries, most South American countries, Israel, the Scandinavian countries and a few others.

South Africa is an easy country to enter!

You will need to have at least one blank page in your passport, proof of a Yellow Fever vaccination if coming from other parts of Africa or South America and proof of onward travel (say the official websites, but we didn’t have to show anything).

The great thing about South Africa is that you don’t need to take anti-malaria pills! The only high-risk areas are Mpumalanga, Limpopo (including Kruger National Park), Zululand and near the border with Mozambique. Most travellers don’t bother taking the pills, which can be expensive, cumbersome and include a long list of side-effects. This is of course your choice, but tales of malaria sickness and bad medical reactions are only usually heard outside of these borders. Malarone currently has fewer side-effects than other pills on the market.

You’ll be surprised at the lack of internet in South Africa…well, the lack of decent internet anyways.  For a western, first world country, they are seriously behind in the internet department.  It’s slow and costs a lot to use.  There’s wi-fi in some restaurants and backpackers but usually it’s not fast enough to be able to upload any photos and the connection will cut in and out.  Very frustrating. SIM cards cost about $25, but if you are driving through the country, it’s necessary to have a phone in case of emergencies.  Also, it’s a good idea to call the backpackers ahead of time to book a room.

When Is The Best Time To Visit South Africa?

September to November and April to May are the best times to visit South Africa, but these times can change depending on your travel pursuits. The temperatures are neither too hot or too cold in these months and the skies are at their clearest. But don’t worry, you can visit South Africa at any time of the year and still be quite comfortable. If you’re planning an ascent to higher altitudes, like those surrounding the Drakensberg Mountains, then you are better off visiting during the warmer months. The climate is driest around the winter months however, which makes animal spotting easier as they tend to congregate around ponds and rivers.

Is This Article Worthy Of Your Board? 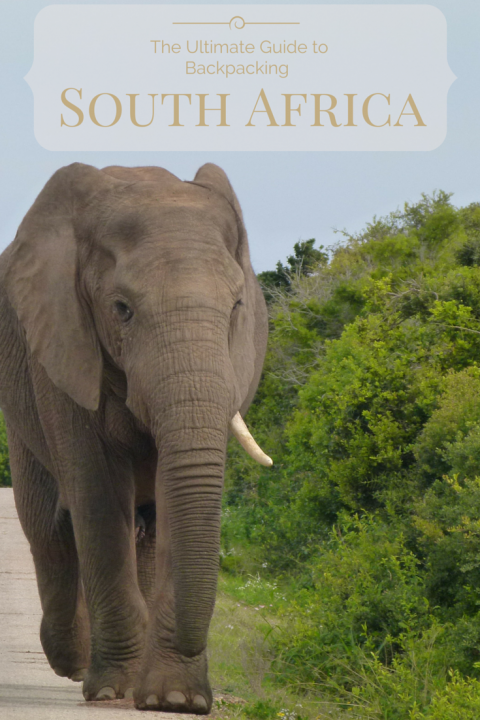