When it comes to hospitality, generosity and kindness, the people of Iran rank at the top of the list. When we were out in the middle of nowhere in the Desert of Garmeh, we met a lovely couple who gave us their number after only 5 minutes of knowing them. They said to call them when we were in Esfahan and we could stay at their house.

Although this was a nice gesture, we didn’t know them at all and figured we probably would just get a hotel instead. However, when it came time to move on from Shiraz to Esfahan, we decided to give Soroush and Mahsa a call.

It turned out to be the best decision we ever made.

Not only did they share their gorgeous, modern apartment with us, (we even had our own room) they also took time off of work to show us around their city, cooked us traditional Iranian food, bought us gifts and introduced us to their friends. We were basically CouchSurfing without the couch!

We explored the nearby park, where we heard some outstanding singing and watched people playing volleyball, but the best thing was that this was a very local area and no tourists were anywhere.

They also showed us the famous bridges, we went to the square and old bazaar, wandered around the Armenian quarter, explored a palace, saw some beautiful mosques and enjoyed their company.

At the end of each day, Soroush would bring out his hookah pipe and we’d finish the night off with a flavourful smoke. Mahsa even insisted that she paint my nails one night at 1:00am! Iranians definitely go to bed much later than us.

We were even invited back to their friend’s home (Erfan and Niloofar) for a night of dancing, eating, playing instruments, singing and puzzle-making. It was very interesting to Nick and I to see how people our age spend their free time and what they do for entertainment in this part of the world – a part of the world where drinking alcohol isn’t an option.

One of our 5 days there, Nick and I decided to introduce our new friends to spaghetti, done the Canadian way! We cooked up the pasta, made a delicious fresh sauce, made garlic bread and shared our meal with our 4 new friends, plus 2 others who came over for the feast. It was just like how it would have been back in Canada on a Saturday night. We had a nice dinner party with great food, company and conversation. The only thing missing was the great glass of red wine!

We like to think that if we met travellers overseas and they came to Canada, we would be as hospitable as our new friends were. But deep down I wonder if this would be the case. Of course, we would offer to take them out for a drink or a meal, but I find it hard to imagine meeting complete strangers for only 5 minutes and then inviting them back to our house for 5 days! I guess that’s just the difference between Iranians and people from the western world. Their kindness is almost impossible to comprehend.

People from Iran are some of the most genuinely hospitable people we’ve ever met. They never want anything in return, they just want to show you a good time and hope that you’ll spread the word back home that Iran is a safe place to visit.

After a very memorable 5 days spent with our new friends, we had to make a move. We decided that since we were running out of time, we would catch a flight from Esfahan to Tabriz in the very north of Iran, a two hour flight that cost us only $40 – unthinkable in Canada!

Would you let complete strangers stay with you for 5 days, cook meals for them, show them around and buy them gifts?! Tell us what you think below. 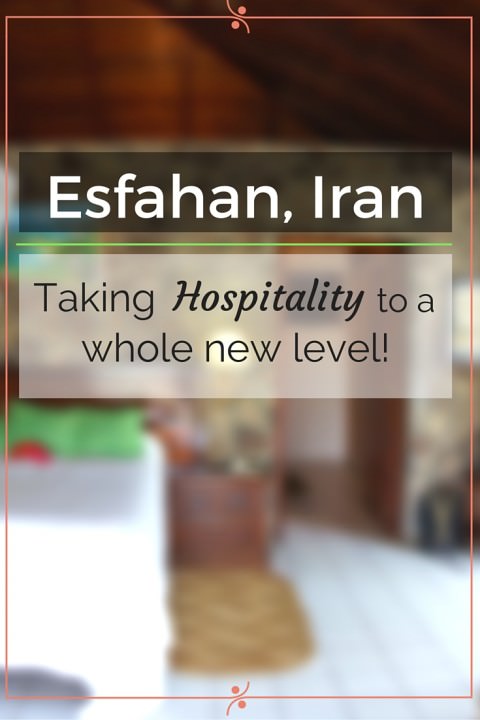