Lake Issyk-Kul: We Came, We Saw, We Had Food Poisoning

Lake Issyk-Kul is a special body of water in the Northeast of Kyrgyzstan. Set between the two towering Ala-Too mountain ranges (which form the northern part of the Tian Shan mountains), this stunning lake is the second largest alpine lake in the world! Astonishingly, due to thermal activity and the depth of the lake, it never freezes.

We’ve seen some beautiful lakes during our travels, and on this trip alone, we’ve managed to add many more to our list of most beautiful lakes in the world. Lake Baikal in Russia was stunning, Tsagaan Nuur in Mongolia was a great place to relax, Big Almaty Lake in Kazakhstan was a breath of fresh air, and now we were heading to the holiday hot-spot for the Kazakhs, Kyrgyzs and Russians, Cholpon-Ata.

Lucky for us, we would be arriving in the shoulder season, so there wouldn’t be many tourists there at all.

We took a 4 hour marshutka (mini-bus) ride from Bishkek to the lakeside town of Cholpon-Ata. During hour 2 of the bus ride, my stomach started to cramp up…and I mean really cramp. Sharp pains shot through my stomach for about 10 minutes straight before easing off, only to return about 10 minutes later. This horrible cycle felt all too familiar – I had food poisoning!

Anyone who has had food poisoning before knows that the last place you want to be is on a bus. I knew I would be erupting at any moment, and it wasn’t going to be pretty. After an excruciating bus ride, we arrived in Cholpon-Ata. We made a bee-line for the first guesthouse we saw and asked to use the toilet. The Russian woman replied “nyet!” Even though I was keeled over in desperate need of one, she wouldn’t let me use it.

Moving on, Nick sat me down next to the bags on the side of the road so he could run off and try to find our elusive guesthouse we had booked. Two minutes later I became frantic, searching and scanning for any sight of something I could use to relieve myself in. It looked like the only option was the bushes. Oh God, I thought, this can’t be happening. Luckily like a beam of white light, a gate opened up right across from me and a woman stood there, I yelled “Toilet!!” with such urgency that she knew I wasn’t messing around. She immediately waved me in and I was so glad, I couldn’t have waited a second later.

If Nick came back from finding our guesthouse and I told him that I shit in the bushes, I’d never hear the end of it!

Our guesthouse in Cholpon-Ata was wonderful. We had a double room at Galina’s Guesthouse (formerly called Angelina’s Guesthouse) with a private bathroom for $13/night. The courtyard was surrounded with leafy apple, plum and apricot trees and the gardens were stocked with bright flowers.

I attempted to wander around the town and check out the beach with Nick, but the cramping was so bad that anything could happen at any minute, so I turned back to the guesthouse while he went out to explore.

He came back with photos of a clear-as-can-be lake, that looked like an ocean, with towering mountains as a backdrop. He told of jet-skis, parasailing, people in bikinis and speedos, beers on the beach and sunshine…which sounds more like Russia than Central Asia!

I was jealous of him being able to see all of that while I was dying a slow death in bed. As it would turn out, Nick had stomach issues later that night. The next day I was better and he was bed-ridden! So in the end, we each went to the beach, swam in the crystal clear waters and ate some local food…separately.

After 2 nights, we were feeling 100% again and decided to move further east along the lake to the city of Karakol. It was time to trade in our bathing suits for our trekking gear!

Have you ever had food poisoning while on the road?! Tell us about it…. 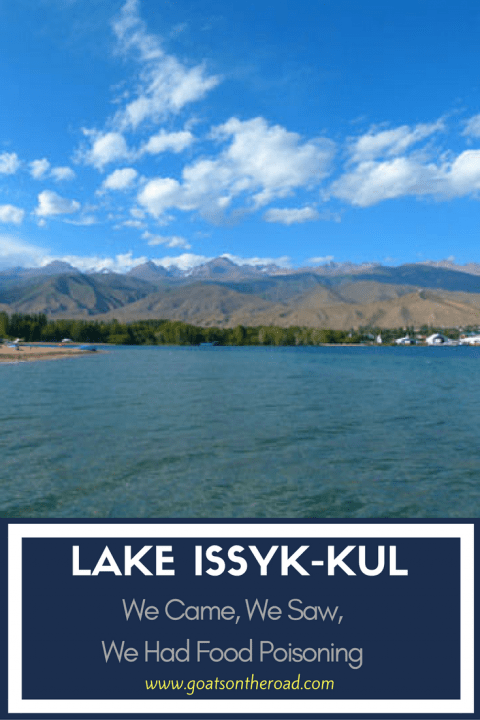