A Travel Guide to Experiencing the Tibetan Monlam Festival in China

For four days every winter, Labrang Monastery in China’s Gansu province plays host to a breathtaking festival on an epic scale, a riot of color, music, and even smell, all wrapped in deep spirituality and centuries-old tradition.

The largest Tibetan Buddhist monastery outside the Tibetan Autonomous Region, Labrang draws thousands of pilgrims who have come to participate in these ceremonies, marking the conclusion of a period of prayer and meditation, known as Monlam, at the start of the Tibetan New Year.

A giant sacred painting is unfurled down the side of a hill, ritual dancers in animal masks gyrate for hours on end, and monks proudly display intricate, towering sculptures made entirely of yak butter. 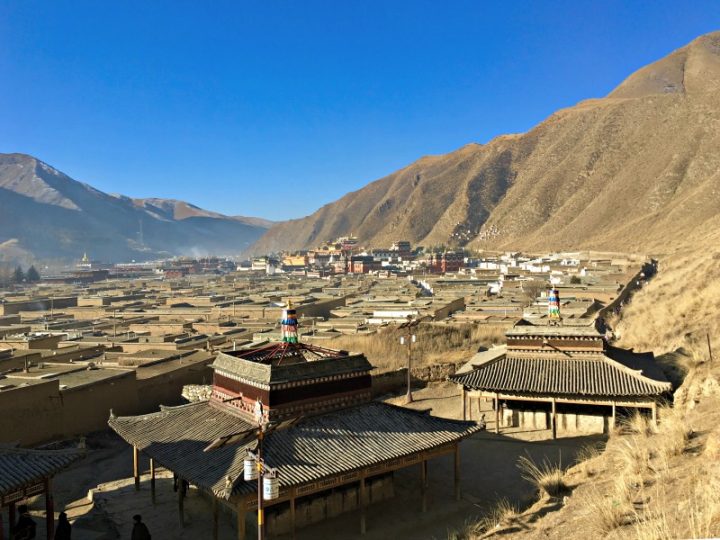 Read on to discover more, and find out how to grab a front-row to experience the unforgettable sights and sounds of the Monlam festival.

Day One: Unveiling the Buddha

The ceremonies begin with the display of the monastery’s giant thangka, an elaborate multicolored tapestry bearing an image of the Buddha, on the side of a hill across the river from the monastery. Just how “giant” is the thangka? At 30 meters by 20 meters, it’s about as tall as Rio de Janiero’s Christ the Redeemer statue!

This is the most famous Monlam event at Labrang, and the one that draws the largest crowds, both of Tibetan pilgrims and Han Chinese tourists. But don’t worry about finding a good spot to watch, there’s a wide field at the foot of the hill and the crowd never gets too dense. 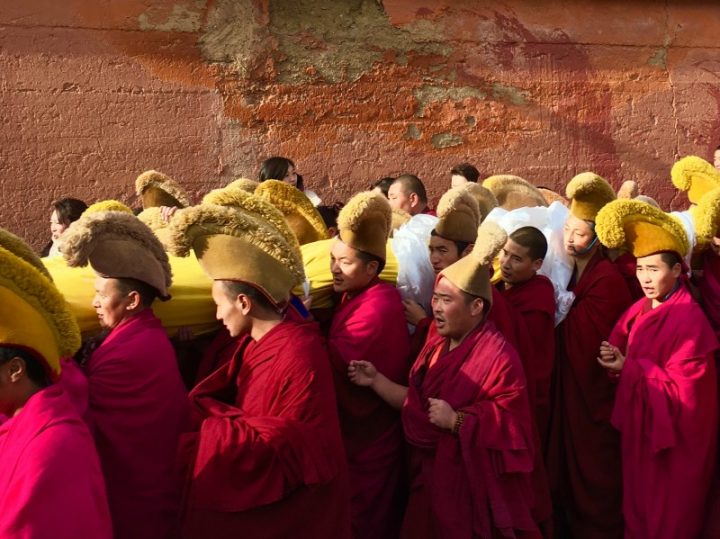 At 10:00am, the ceremony begins at the left side of the monastery’s main hall. The thangka is carried out (rolled up) by a long, snaking procession of monks through the streets of the monastery complex. You’ll see pilgrims dash up to touch the rolled-up thangka to receive its blessing, often tussling with grey-robed temple guards whose mission it is to make sure the thangka arrives safely at its destination.

Around half an hour later, the thangka is slowly carried up the hill and just as slowly unrolled, accompanied by the steady beat of drums and cymbals. Once the entire image is revealed, pilgrims bow down to pay homage, with some tossing bundled-up white silk khata scarves towards the thangka as an offering. 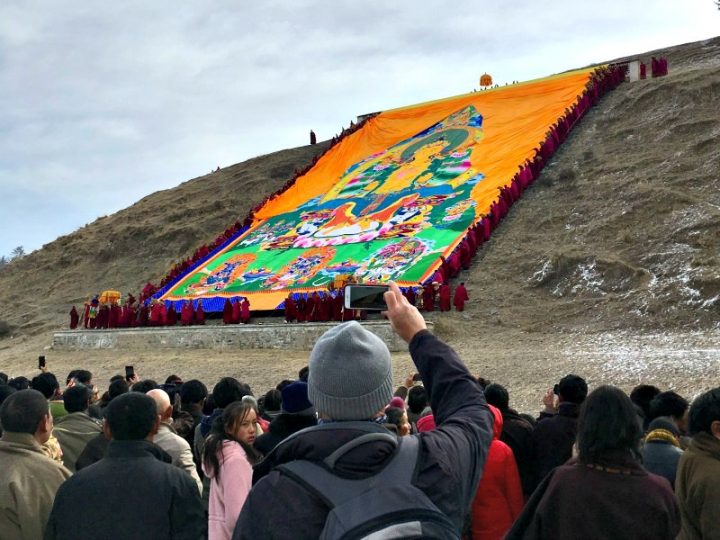 Overall, atmosphere is pretty relaxed for a religious ceremony, and you’ll find most people, both Han Chinese and Tibetan, are most concerned with taking the perfect photo. With the thangka on display for about half an hour before being rolled up once again, there’s plenty of time to get the shot just right.

Day Two: Dancing with the Devil

The second day features the cham dance, a ritual involving dozens of performers elaborately costumed as deities and demons, leading outsiders to dub the performance “the devil dance”. The dance is held in the wide plaza in front of the main hall, with the “stage” drawn in chalk on the paving stones. 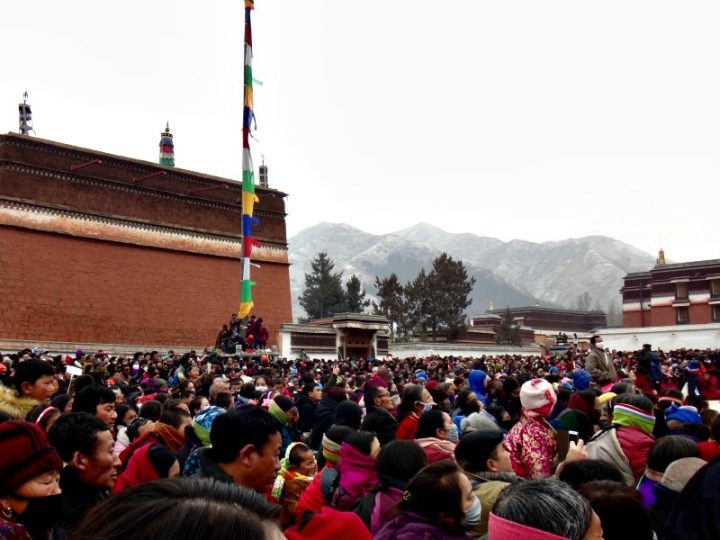 If you arrive an hour early, around 9:00am, you’re guaranteed front row seats, but make sure to come prepared. Veteran locals bring a stool or a cushion to sit on. This is not only to stay comfortable during the four hour-long performance (yes, it really does take four hours!) but also to stake their place, as organizers will push standing spectators further back to accommodate the growing crowds. 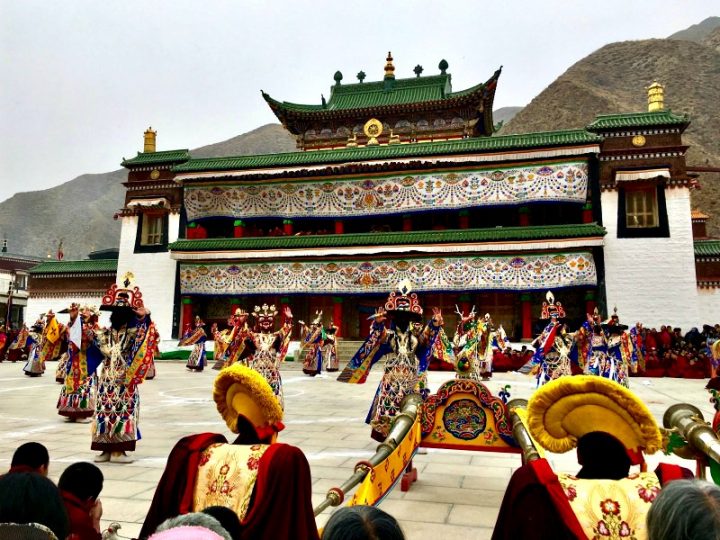 While the costumes and masks of the dancers are eye-catching in their detail and color, the movement itself is slow and repetitive, backed by the steady, monotonous beating of drums and rattle of cymbals. It may seem a little boring, but it’s supposed to be that way – devout Buddhists take the dance as an exercise in meditation, and a chance to spiritually connect with the deities portrayed. 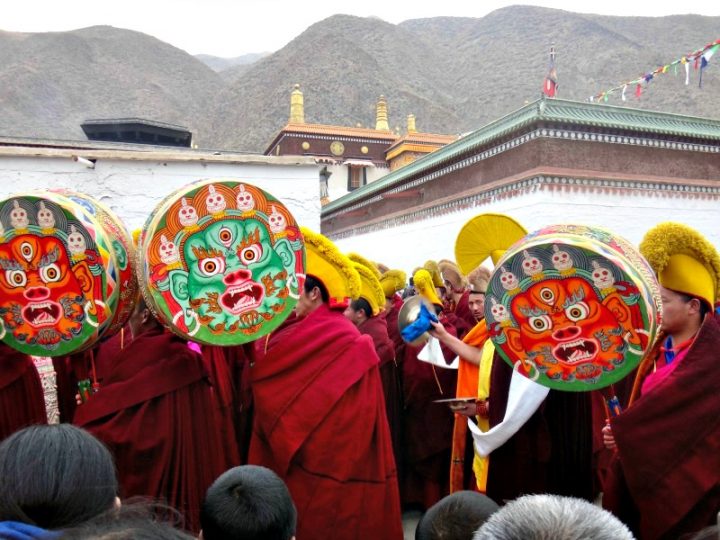 If you don’t have the stamina to make it through the entire dance, you’ll have another chance to see the entire spectacle in a procession that leaves the main square heading west, to the village on the edge of the monastery.

About a half hour after the dance is finished and the performers have had a well-deserved lunch (bowls of butter tea and handfuls of yak meat), all of the costumed dancers, along with the monks carrying their horns and drums, make their way to a field on the outskirts of the town. This is where a bonfire and firecrackers bring the day’s rituals to an exciting end.

The third day hosts what may be the most beautiful event of Monlam, a display of colorful, elaborate sculptures crafted by the monks. Looking at these creations, it’s almost impossible to guess what they’re made of: yak butter, a surprisingly durable material in the frigid winter temperatures.

Starting in the late afternoon, the towering, multi-stage sculptures are carefully brought out from their workshops and assembled in front of the main hall. Around 7pm, once the sun has set, the monks hold a short ceremony in the main plaza to kick off the display. 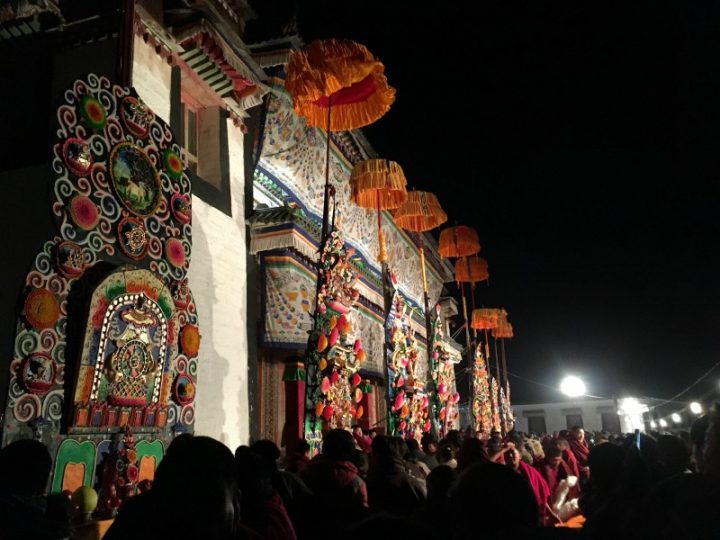 By this time, however, the entire monastery will have been roped off, with only one narrow entrance at the far western end where crowds line up to walk past the sculptures and see them up close. Most pilgrims will only be able to watch this on one of the giant TV screens set up at the entrance to the monastery. 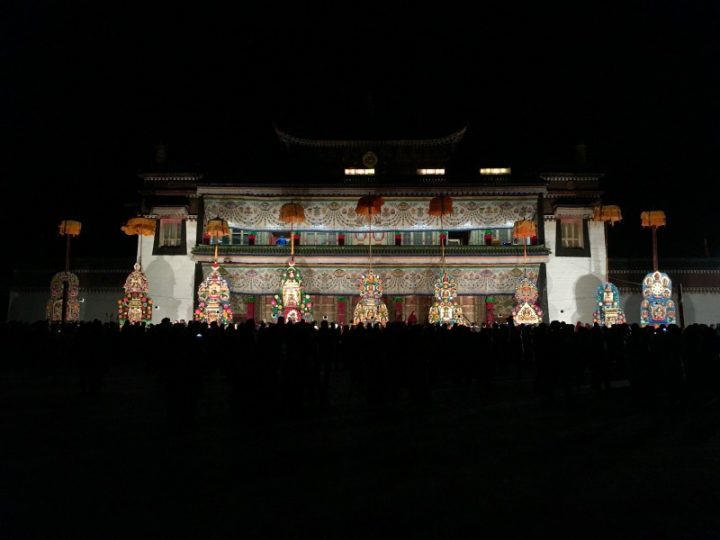 The butter sculptures stay on display long into the night, so there’s no need to rush to get in line. While the wait can last for hours early in the evening, after 11:00pm it can take less than ten minutes to pass from the start of the line to the end, and you’ll be able to soak up the beauty and the details of each carving without being pushed along by the crowds.

After the sights and sounds of the last few days, the final ritual of Monlam is rather low key. Starting, of course, at 10:00am, all the monks of Labrang walk in procession around the entire length of the monastery, carrying a statue of Maitreya, the future Buddha, in a golden sedan chair (hidden from view behind golden curtains), along with banners, drums, and other sacred images. 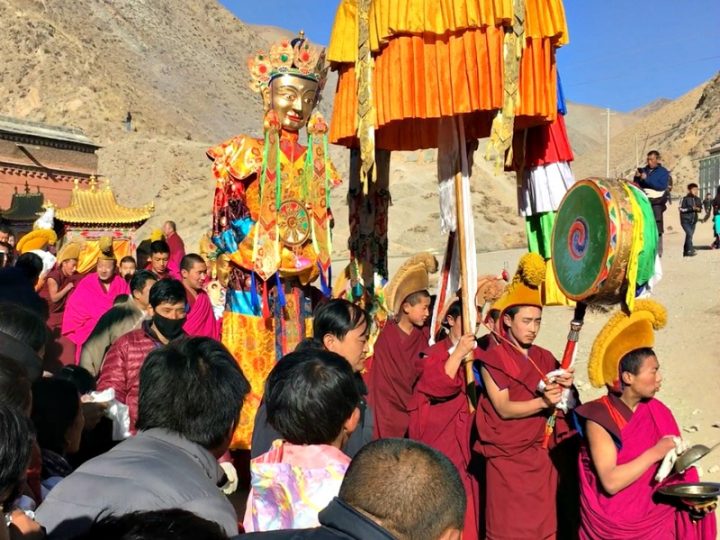 The procession begins at a small shrine to the left of the main hall, a short walk up the hill. Treading over religious symbols and elaborate designs painted in the dust to mark the occasion, the procession goes further up the hill and follows the pilgrims’ path surrounding the monastery.

☞ SEE ALSO: Teaching English in China – Getting a Job is Easier Than You Think 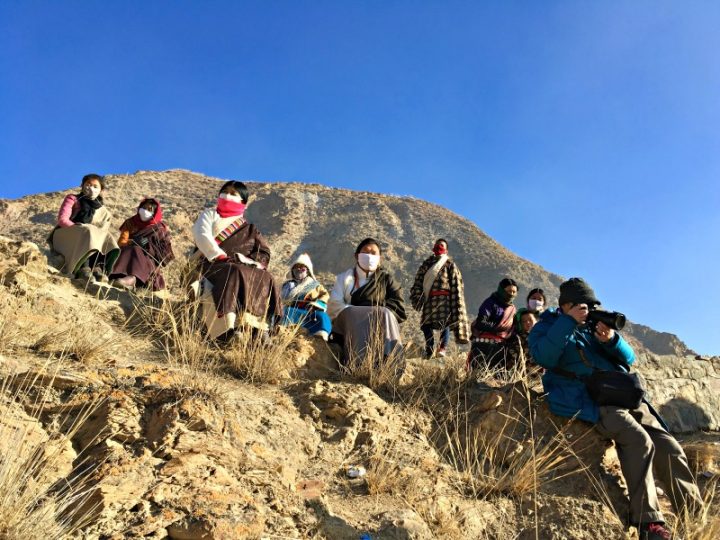 It’s not hard to find a good spot to watch the procession, just remember one cardinal rule: as a sign of respect, don’t stand higher than the Buddha. Many tourists, photographers, and even pilgrims learn this the hard way, staking out a perch on the cliffs above the pilgrims’ path, only to be shooed away by monks at the last minute, just before the procession arrives their way.

The four days of Labrang’s Monlam celebrations are a truly unforgettable experience. Even the most seasoned traveler is sure to be moved not only by the spectacular rituals put on by the monks, but just as much by the deep faith and proud culture of the thousands of pilgrims who converge on the monastery during Monlam.

For anyone who finds themselves in China this winter, a detour to this fascinating corner of Gansu (or a stop here along a longer trek across the Silk Road and the Himalayas) is a sure to be the highlight of any travel itinerary.

When to See Monlam

The thangka unveiling ceremony is held on the 13th day of the first month of the Chinese lunar calendar. In 2017, this fell on February 9 on the Gregorian calendar. This year, it will begin on February 28, 2018. The cham dance, butter lamp display and Maitreya procession will occur on March 1, 2, and 3, respectively.

Getting there and Getting Around

Buses to Xiahe (夏河), the town where Labrang Monastery is located, leave from Lanzhou, the capital of Gansu province, departing the Lanzhou south bus station (兰州汽车南站) every few hours. You can also reach Xiahe from the Lanzhou airport, first taking the airport bus to Linxia (临夏) and then switching to a bus to Xiahe. The trip takes about six hours in total.

Rooms fill up fast, especially at hotels close to the monastery such as the Overseas Tibetan Hotel (华侨饭店) and Baoma Hotel (宝马宾馆, 77 Renmin Lu, +86 0941 7121 078) Try to book at least three weeks in advance. If time is tight, hotels a bit further out should still have plenty of rooms available. The Holiday Weekend Hotel (拉卜楞假周旅馆, 514 Buxing Jie, +86 0941 7224 999) less than 5 minutes away by taxi, is a good bet. For more accommodation options in Xiahe, click here to see rooms and reviews on Booking.com. 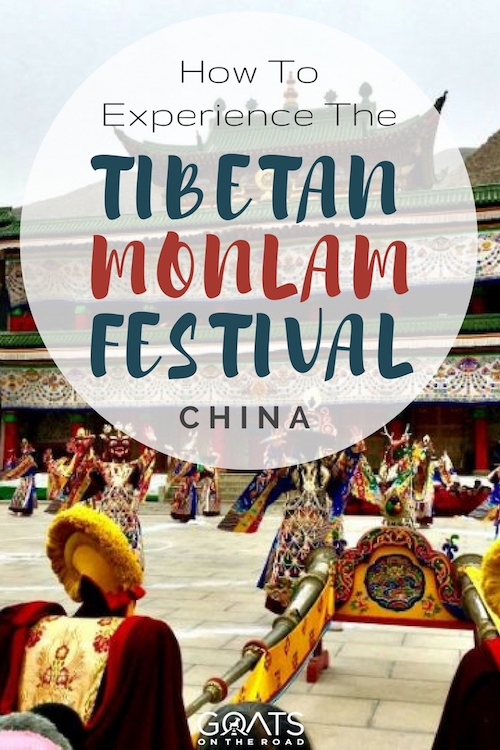 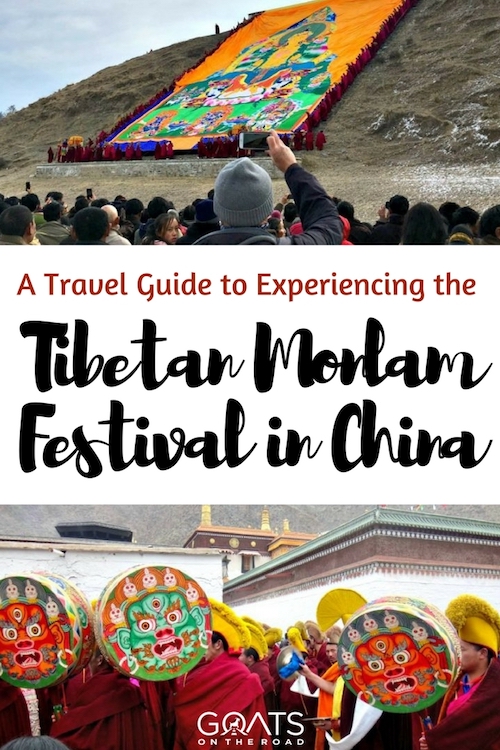 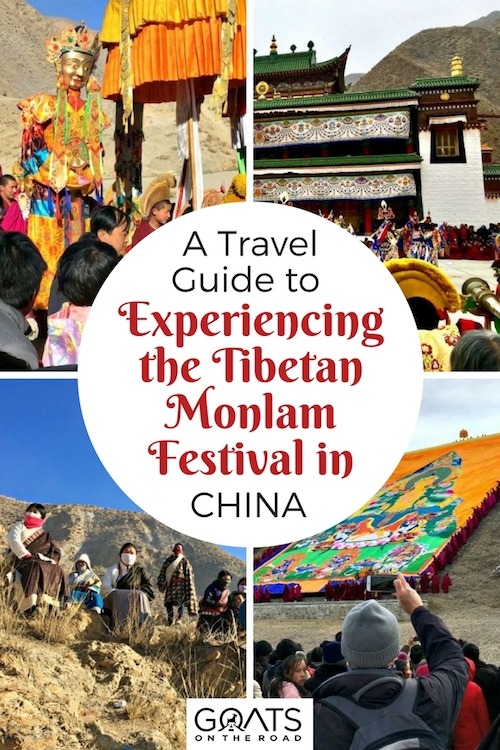 Based in Beijing, Michael is fascinated by the surprises hidden just around the corner from the well-worn tourist trail, but is just as willing to venture into the foothills of Tibet or bike down country roads in Vietnam, as long as he knows there’s a good story waiting at the end.