We are constantly asked how we saved enough money to travel, which is a legitimate question! We were recently featured on CNN Money and the article focused on just that – how we saved for our first big trip abroad. This made me realize that we have never really written about it here on our own site.

The idea for a trip came about after we went on an all-inclusive vacation in Mexico in February, 2008. Upon returning, we both decided that we loved the tropics, were bored with our current lives in Canada, and we wanted an adventure.

We started watching backpacking and travel programs on TV, and read every guidebook that we could get our hands on.

On November 19, 2008 (just eight months later), we strapped on our backpacks and set off on our very first backpacking trip through Southeast Asia, India and Sri Lanka.

So, how did we have $40,000 Canadian Dollars in the bank after just eight months? Here’s how:

Taking on a Roommate

When saving for travel, it’s imperative to cut costs wherever you can, and to supplement your income whenever possible.

I owned a condominium back when we were planning our trip. Nick and I both lived there together, with a roommate who occupied the second bedroom.

Having that extra person help to pay the mortgage and utility costs really helped us out. She paid me $800 / month, which allowed me to keep an extra $800 in the bank each month to put towards travel and / or bills.

As soon as we knew we wanted to go on a trip, we started cutting our spending. We had the normal cable and internet packages, and in order to save some money, we cut them back to the most basic ones possible.

I used to get my hair done at an expensive salon in downtown Calgary – around $200 for a cut and colour. I would do this every two months. To save money, rather than going to the fancy hairstylist, I bought boxed hair dye for $10. I would go for a haircut, but not as often, and when I did go, I went to a cheaper place that charged $50 or less.

Instead of spending $800 over eight months that we were saving, I spent about $250 on hair care.

Rather than purchasing guidebooks to plan our trip, we rented them from the library. Or, we went into Chapters bookstore and would sit there and read the guidebooks, while having our once a month Starbucks treat in the attached shop (this is a normal thing to do at Chapters in Calgary).

Speaking of Starbucks. I used to get a coffee every day for $5 – $7 depending on the type. That’s $25 / week at a minimum. So, I stopped having Starbucks during the week and would drink the free coffee available at work. That was a savings of $100 / month.

Rather than going out to the movie theatre for date night, we would rent movies (people rented movies in 2008!). A trip to the theatre cost $13 / person, plus popcorn and other goodies, for a total of about $40. A rented movie and microwave popcorn cost about $6.

It’s amazing how much money you can save on small things if you really put your mind to it.

Nick was a printing press operator at a factory in Calgary and he was paid hourly for his work. If he worked any overtime (above 40 hours / week), he was paid time and a half. If he were to work statutory holidays, he was paid triple time. If he chose to work on weekends, he was paid double time.

Needless to say, we didn’t see each other all that often while saving money for travel! But, Nick was able to bank a lot of money in eight months, so the sacrifice was worth it.

I worked as a real estate paralegal at the time and was lucky enough to earn a good wage, and be given bonuses, vacation pay, and sick pay.

If I didn’t take my allotted vacation time (which was three weeks) or my sick days (which was one week), then I would be able to take that as cash at the end of the year. After the one week trip to Mexico, I was left with two weeks vacation time as a payout. And because I don’t really get sick, I was given my sick pay as well!

The same went for Nick. He was given two weeks of vacation at his job, and after our trip to Mexico, he had one week left over which he took as a cash payout when he quit his job.

All of these payouts together equaled a few thousand dollars.

I didn’t have a car when we were living in Calgary, as I lived close enough to my work that I could walk (30 minutes), or take the bus for cheap when it was really chilly outside, or if I were feeling particularly lazy.

Nick owned a car because he needed one to get to his job, and it was good to have for travelling around the sprawling city. Plus, the public transportation system in Calgary isn’t the greatest.

Nick sold his car a few weeks before we set off to Bangkok. After selling his beloved car, Nick pocketed $6,500 (he bought it for $12K. Cars are never a good investment).

A large chunk of my contribution to our first trip came from selling my condominium in Calgary. Unfortunately, I didn’t sell it earlier (ignoring advice from, well, everyone). Had I done so, I would have made much, much more money.

The value of the condominium was very high during the oil and gas / real estate boom in Alberta. But, when I went to sell the property, it was during the downturn into a recession (remember, this was all happening in 2008).

We had talked about keeping the condominium and renting it out while we were away, but the cost of a property manager was high, and I didn’t want to have to deal with renter’s issues while laying on a beach in Indonesia. Plus, I wanted (needed) the money for the trip, and I just wanted to be finished with that tie in Calgary. It felt right to sell.

After the cost of sprucing up the place with some paint, having a stager come in, paying off all debts and fees (credit card, realtor, legal, mortgage and line of credit), I still made a pretty good amount of money from the sale of the condo.

Even though we cut down all of our bills and monthly spending, we still had loads of mandatory living expenses during our final eight months in Calgary:

But, even after spending money on all of those necessary expenses, we still ended up meeting our goal of saving $40,000!

We planned to travel for one year, but we ended up staying overseas for 13 months. We spent roughly $33,000 for the both of us for 13 months of travel around SE Asia and the Subcontinent.

Was It Worth It?

Spending a little over $30,000 on 13 months of travel was absolutely worth it!

That money was spent on experiences and activities, as opposed to material items and superficial things. We learned about other cultures, met wonderful locals and travellers, tried new foods and activities, and exposed ourselves to another way of living. 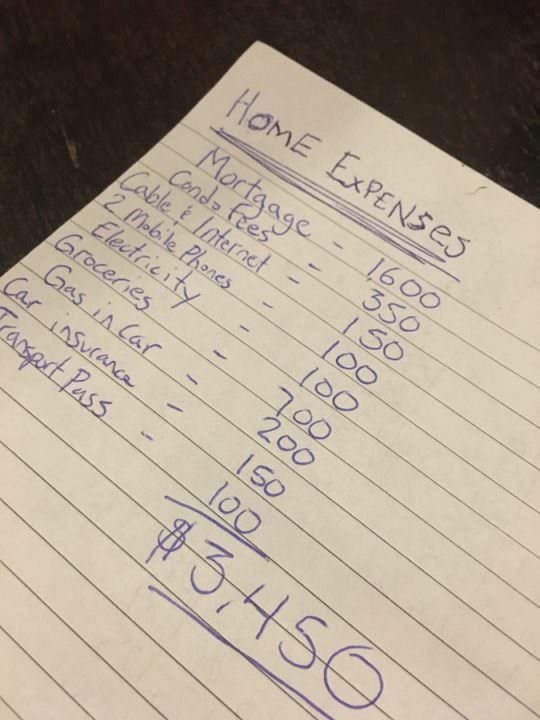 Thinking back now, we can’t believe how much money we used to spend on living expenses in Canada. I don’t mean anything fun like weekends away, date nights, or any sort of entertainment – just basic, every day costs.

We calculated that while we were living at home we were spending roughly $3,500 / month on all of the “essentials” before we even woke up.

Putting that into perspective, after we booked our flights to and from Asia, paid for travel insurance and bought our gear etc., our travel budget while on the road was just $50 per day (or around $1,500 per month).

That’s less than half the cost of living in Canada, and we were enjoying a much more rewarding life overseas.

After our SE Asia trip, we realized just how far our money goes abroad, and how much money we wasted on things that didn’t bring us any happiness in Canada.

At that point, we only had SE Asia and the Subcontinent to compare it to, but having now travelled around the world for almost eight years, we know that there are many countries in Europe, Latin America and Asia where your hard earned dollars will go further than in Canada, the USA, England or Australia.

For $1,500 – $2,000 / month, a couple can travel comfortably in many parts of the world. That same amount is barely a mortgage payment, or a rent payment back in Canada.

Travel has now become our way of life, and we are forever grateful that we had the courage to quit our jobs, sell our assets, store the remainder of our possessions (which we later lost in a flood), and say goodbye to our familiar lives in Canada. Setting off on our first backpacking adventure was eye opening and life altering.

Hopefully this article gave you some good ideas to start saving towards your own travel goals. For some more advice and inspiration on saving money for travel, have a look at these posts:

The Ultimate Guide to an Early Retirement

How To Travel the World When You Have Absolutely No Money

10 Ways To Save Money For a World Trip

Your turn! Have you ever been on a long-term trip before, or have you thought about selling-up to travel? Share your story with us in the comments below! 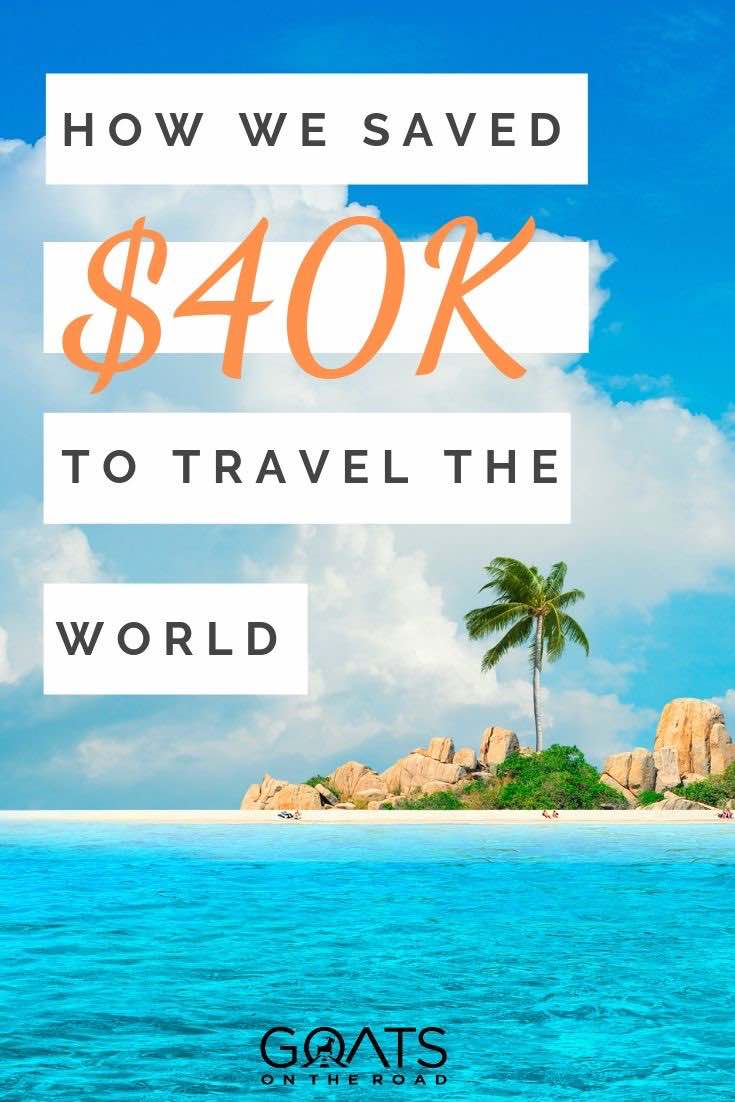 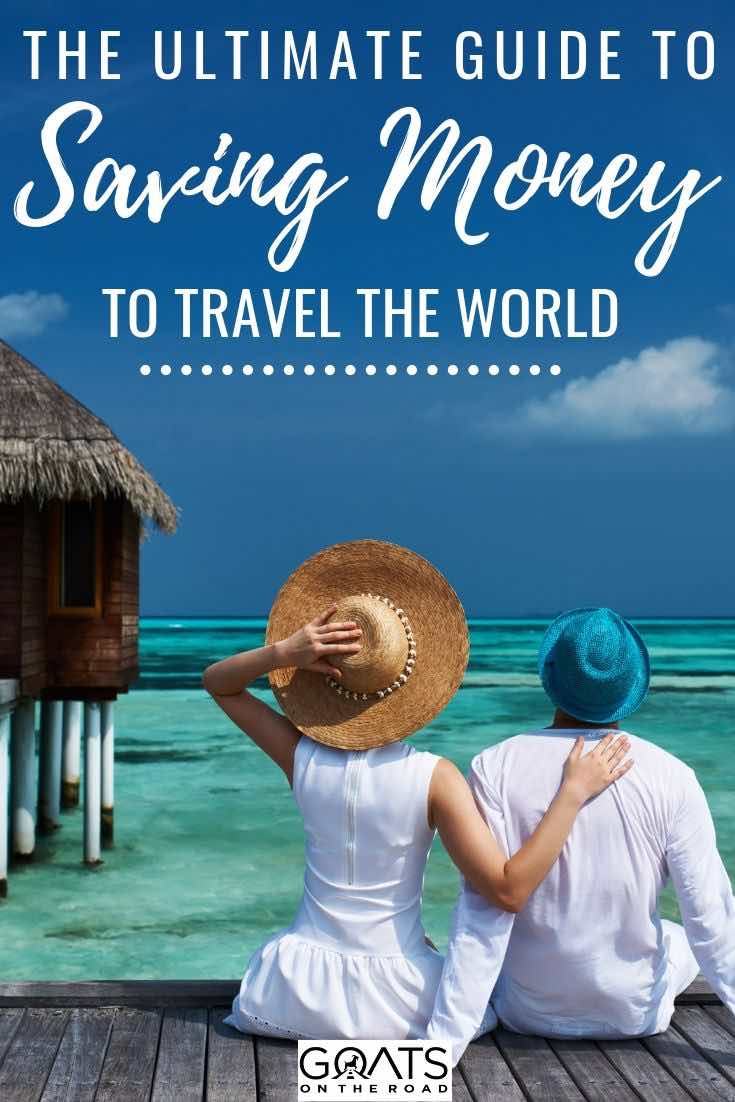 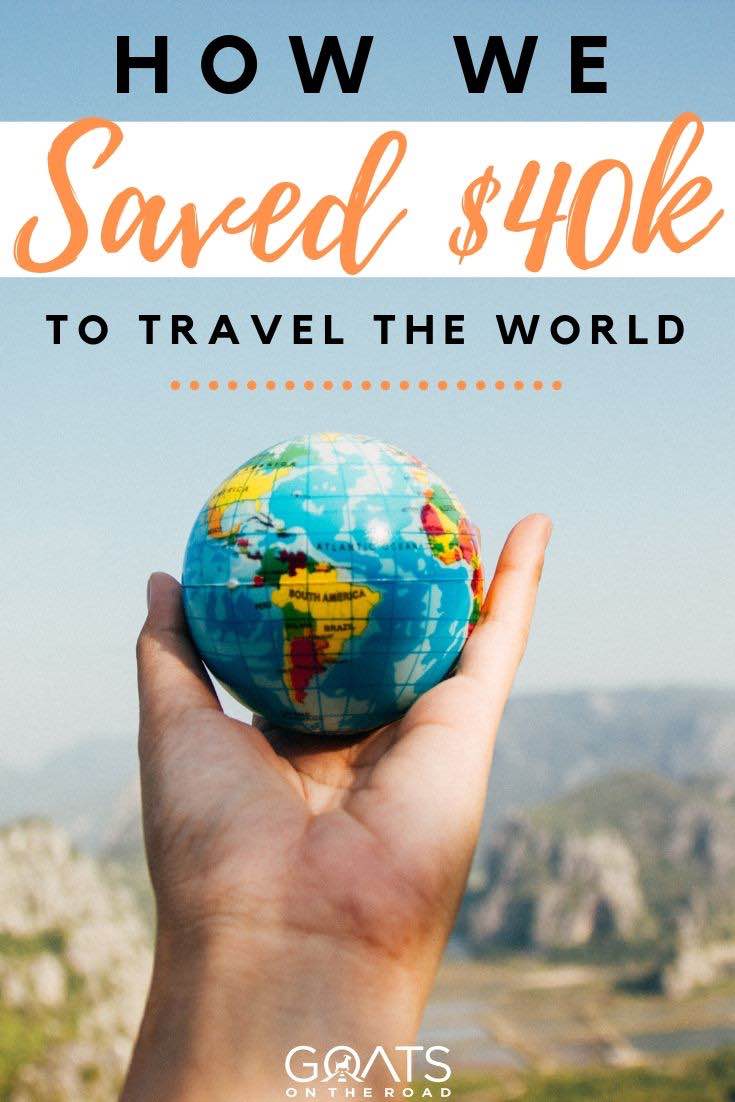 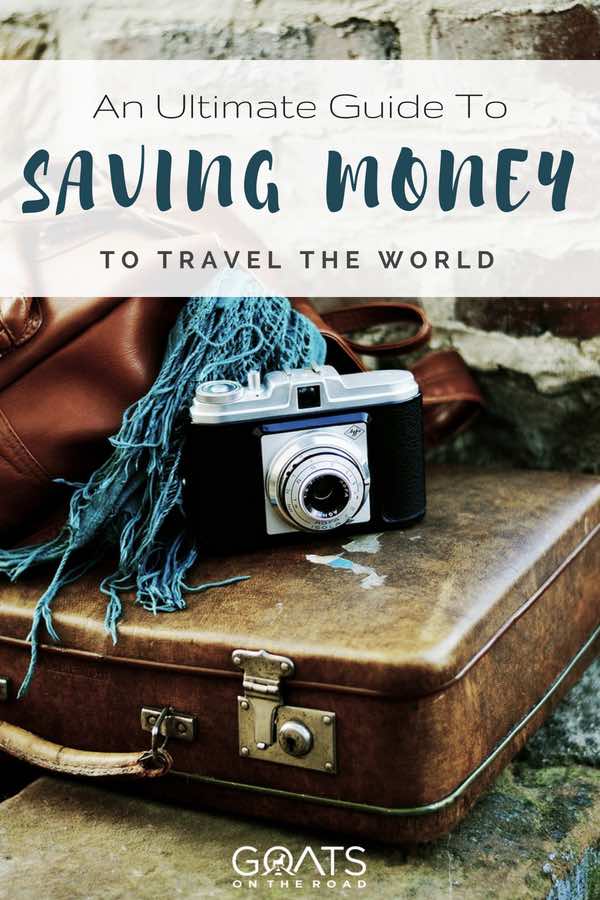 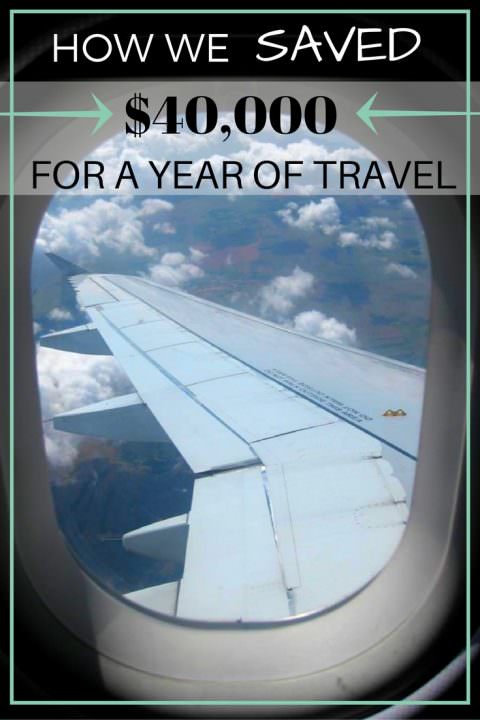 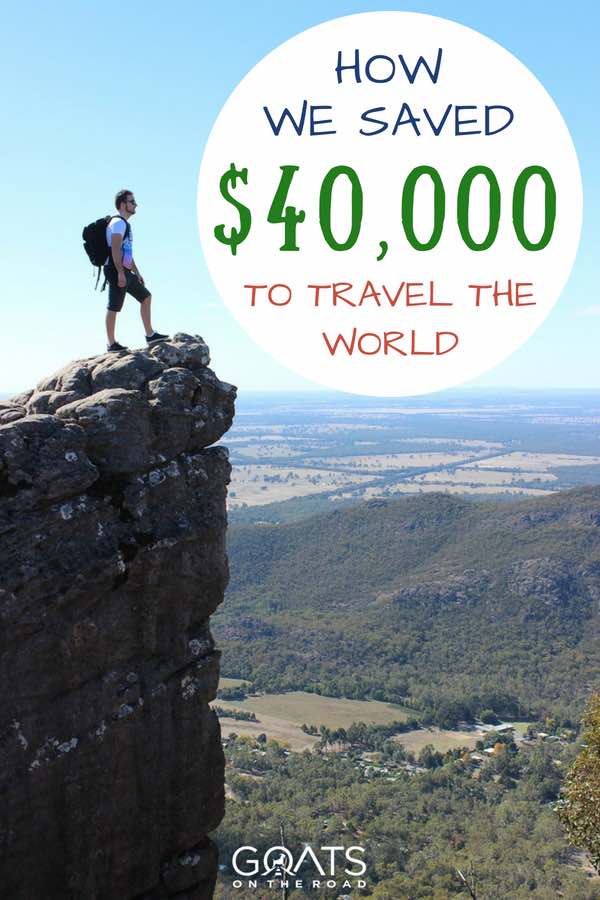 15 Simple Money Saving Tips Anyone Can Use

Do you want to travel more? Save money to move abroad? Pay down your debt? Have a nest egg so you can start your own business? Finding the extra cash to do so isn’t always easy. In this article, I’ll share 15 simple money-saving tips to help you keep more cash in your pocket. We ...
September 12, 2020
By:
Dariece Swift

Saving money isn’t always easy, but even if you think that you can’t save a penny, you probably can. All you have to do is limit your spending, record your earnings and employ some simple tactics to keep your money working for you and growing as much as possible. In this article, I’m sharing 7 ...
March 15, 2020
By:
Nick Wharton

10 Brilliant Hacks To Save Big Money On Airfare

Perhaps one of the most frustrating things about booking travels is seeing the cost of flights fluctuating up and down. Just when you think you’ve found a great deal, you realize that it’s much cheaper on another booking engine, or just after you book your flight, the price goes down by 20% for no apparent ...
November 1, 2018
By:
Nick Wharton
About
Contact Us
Work With Us
Start Here
Start a Blog
Privacy