Sipadan: The Best Scuba Dive Of My Life

Sipadan is Malaysia’s only oceanic island and it is actually a massive extinct volcano cone. Coral has grown from the volcanic rock mountain which lays dormant and almost totally submerged in the Celebes Sea. Located  just off the north eastern coast of Borneo, Sipadan has long been a scuba diving mecca.

When we were travelling in the area (July, 2009), we heard other divers speak of this tiny island as if it was the holy grail of marine ecosystems. Over 3,000 species of fish inhabit this tiny atoll and they are accompanied by hundreds of green and hawksbill turtles, as well as barracuda, jack fish, hammer head sharks, whale sharks and more. This was definitely a place I had to see!

We planned our trip to Borneo, one of the most beautiful islands in the world, and excitedly booked our flights online.  There are a limited number of flights to this island, so we searched different airlines for the best deal. We typically find AirAsia to be the cheapest, but by using Expedia, we were able to lock in a seat sale and we flew from Kuala Lumpur, Malaysia to jungle-clad Borneo for less than $40!

The conditions in July were absolutely perfect for a great week of diving. We arrived in the Northeastern town of Semporna after a long bus ride from Kota Kinabalu. We found a small, basic hotel, checked in and promptly passed out.

The next morning I awoke early and headed to the dive shop where I suited up and prepared myself for my first 2 dives. As I boarded the dive boat, I couldn’t help but to by hypnotized by the brilliantly clear waters of the Semporna Marine Park. As the sun rose higher in the sky, it illuminated the powdery white sand below our boat and the entire sea took on an effervescent glow.

I chose to do the 10 dive package and my first 7 dives around the Semporna Marine Park were spectacular! I immediately rated them as some of my favourite spots on scuba and couldn’t imagine how Sipadan could possibly be much better than those first few dives. Well, it was…

On the fourth day, I had 3 dives planned at Sipadan Island and as we slowly cruised over the glass-calm waters of the Celebes Sea, I chatted with our 65-year-old dive master, Richard Mei. Richard has been diving these waters since before I was born and he has been a big part of the conservation on the islands. I asked him if we’d see any turtles and he replied:

I laughed and thought for sure he was exaggerating.

On the horizon I could see a tiny spec of jungle rimmed by a glowing ring of white sand. “That’s Sipadan!”, Richard hollered over the hum of the engine. “Time to get suited up!”

I was ecstatic as I donned my tank, mask and fins. We all sat on the edge of the boat and one by one we dropped backwards, our splashes shattering the otherwise glass-like emerald waters.

As soon as the bubbles from my entry cleared around me, I realized that we were all in the middle of a massive tornado. The swirling mass spiralled around us in every direction and downward as far as the eye could see. The twister was made entirely of jack fish, some reaching 4 feet long! The excited fish were so densely clustered that we couldn’t see the waters beyond their silvery cyclone.

Finally the whirlwind dissipated and we could see the edge of Sipadan Island. Richard signaled for us to continue and we all swam slowly, single file at a depth of about 30 meters. We followed Richard along the massive coral wall which plunged to a depth of nearly 600 meters below us.

The visibility was so good that I could spot reef sharks circling their prey some 40 meters below. The coral embankment on my left was so brightly coloured that it looked surreal. Brilliant blue and red fan corals gently waved back and forth in the transparent sea. Every 10 meters or so we passed different caves that seemed to be dug out of the wall. Inside of nearly every cave there was a turtle. Richard jokingly began counting turtles with his fingers and by the time we finished our third dive, I think he lost count at around 30.

Every dive at Sipadan was the best dive of my life. I swam with reef sharks and eagle rays. I laid next to nurse sharks and turtles as they slept in small reef caves. I spotted an octupus, sting rays and so many other fish that it would be impossible to list each species here. The marine life at Sipadan was so abundant that it seemed as if all of the fish from the nearby reefs came to meet at this one coral atoll, leaving the other seas barren and empty. Why so many species of fish, turtle and coral congregate here is a mystery, but it makes for a truly memorable dive.

Dariece met me at shore and she could tell by the massive grin on my face that I had an amazing day of scuba diving. I struggled to recall all that I had seen as I excitedly explained the dives to her.

Richard laughed and patted me on the back “I told you we’d see turtles” he said proudly. But in truth, the turtles were only a small part of what made Sipadan so spectacular. The sheer diversity of the sea life, the colour of the corals and the clarity of the water made Sipadan the most unforgettable dive of my scuba career. Since then, I have dove in The Red Sea, Egypt, seen Humpback Whales on scuba in Tofu, Mozambique,  been cave diving in Cenotes in Mexico, and visited spectacular reefs in Belize, but none of them compare to the wonder that is Sipadan. I hope one day I can return to this underwater dreamland which will probably remain for me, the best dive site on Earth!

I chose to dive with Sipadan Scuba. (Click here for their current rates)

Sipadan Island is limited to 120 divers / day and to ensure you can dive on Sipadan itself, it’s best to purchase the 6 – 10 dive packages 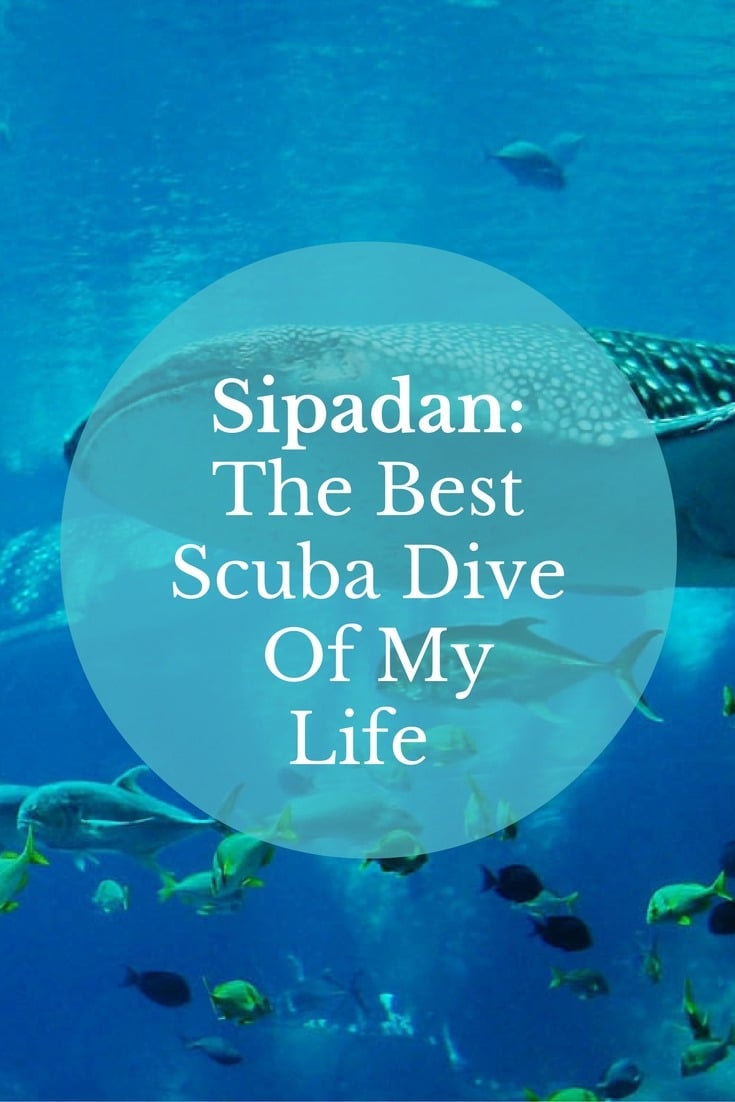 23 thoughts on “Sipadan: The Best Scuba Dive Of My Life”