Submerging Into Cenotes: A Cave Dive In Mexico

After finishing up our amazing 5 day press trip with Riviera Maya Tourism in Playa del Carmen, we headed over to Tulum.  We had floated down rivers, climbed ruins and watched performances, but I was ready to get under the water.

Here I had a truly amazing adventure planned, a dip in Dos Ojos, Mexico’s premier cenote dive. Diving in cenotes is both dangerous and exhilarating and I couldn’t wait to see what loomed in these underground river systems. I chose to dive with Mexi Divers because they are the most renowned dive shop in the Tulum area and they are experts at navigating these watery, underground labyrinths.

The word Cenote derives from the Yucatec Maya word, “Ts’onot” which refers to any location where there is an opening to the in the cave which leads to the surface. These river systems were the main source of freshwater for the ancient Mayan people and they are a large part of the reason why the Mayan civilizations were able to flourish here for so many years. There are an estimated 7,000 cenotes in the Yucatan Peninsula alone. These crystal clear waterways slowly flow under a thin layer of limestone rock, crisscrossing each other for hundreds of kilometers in each direction before finally draining into the sea. 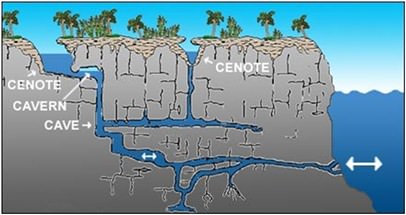 The water in Mexico’s cenotes is known for its bewildering clarity and diving in a cenote has always been a privilege for certified divers. This ancient network of underground rivers has always been sacred to the Maya people and to be able to penetrate their awesome depths with nothing more than a flashlight and scuba gear is a true honour.

As I hadn’t been diving since we were in El Nido, Philippines nearly two years prior, Mexi Divers wisely instructed me to do a refresher dive. Diving in good conditions still presents its dangers, so it’s important for divers to make sure they brush up on all of their skills if they haven’t been diving for more than a few months.

I arrived early for my refresher dive and met with Mariano, my Argentinian dive master who would be refreshing me on my ocean dive. He was extremely thorough and professional. We tried on all of my gear and headed out to sea.

As soon as we started our descent into the crystal clear Caribbean, I felt completely comfortable. For me, diving has always been like riding a bicycle and even after a 2 year absence, I breezed through the skills so that Mariano and I were able to enjoy the rest of the dive freely.

The ocean refresher was great, we slowly followed the narrow coral canyons that crease the sea floor near Tulum. We were at “The Aquarium” dive site and I would highly recommend it as an easy, starter-dive for anyone. We spotted plenty of fish, a huge moray eel and some crabs. Getting under the water again only reignited my love for diving and I knew that I would have to do more while we were near to such world-class dive locales like Mexico and Belize.

We returned to the boat and as we slowly cruised over the wavy seas and back to shore, I thought of nothing but my cenote dive which was planned for the next day.

The Day Of The Dive

I awoke early in our room in Tulum on the morning of my big dive. I didn’t need to get up yet but I was too excited to fall back asleep. I grabbed my dive book, hopped on my bike and headed to Mexi Divers on Tulum Beach.

When I arrived, Mariano wasn’t there and I met with my new dive master for the day Eduardo, a 20-year-old Mexican dive instructor who has been diving since he was 14!

We loaded up the truck and headed to Dos Ojos, perhaps the most famous cenote dive in all of Mexico. It’s ominous depths have been featured in IMAX films, BBC, Discovery Channel and the famous Planet Earth series.

Dos Ojos  is a famous flooded cave system just north of Tulum and only a few hundred meters from the Caribbean Coast of the Yucatan Peninsula. Meaning “Two Eyes” in spanish, it is named for it’s two circular canyons.

Exploration of the caves began in 1987 and still continues to this day. The surveyed extent of the cave spans an astonishing 82 kilometers and there are 28 known entrances or sinkholes into the system. One of these entrances, “The Pit” is the deepest known cave passage in Quintana Roo and it plummets down to 119 meters at its deepest point!

We paid our entrance fee to the park (100 pesos) and drove through the jungle for about 10 minutes before arriving at the opening. We must have left early because we were the only ones at the site! We quickly suited up and brought our tanks down a set of stairs to the mouth of the cave.

The first thing I noticed was the brilliant, green-blue color of the water which seemed to glow flourescent as it painted the ceiling of the cave with a dancing array of reflected light. The calm pool was so clear that it looked like some kind of portal, rather than a body of water.

We walked down the 5 steps and submerged ourselves in the crystal clear liquid. I can’t even compare the visibility in Dos Ojos with any other dive I’ve ever done. Tiny ocean particles and organisms limit visibility in the sea to a maximum of about 30 – 40 meters (on a clear day). The water in Dos Ojos is said to have at least 100 meters visibility, but I think it’s more. There simply isn’t a place with an opening bigger than 100 meters, so you really can’t tell how far your vision could go in these lucid depths.

I followed Eduardo as we carefully navigated the maze of stalactite and stalagmite formations. Parts of the walls looked like wax had built up from thousands of candles and slowly melted down into beautifully coloured rock icicles. 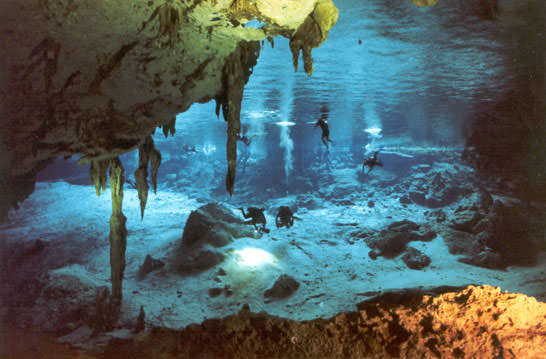 Looking forward at Eduardo I had the strange sensation that we were both floating in mid-air. The water was so clear that we really had no feeling of being submerged, aside from the quiet hum of the bubbles which slowly left our regulators and found a home on the jagged ceiling above. 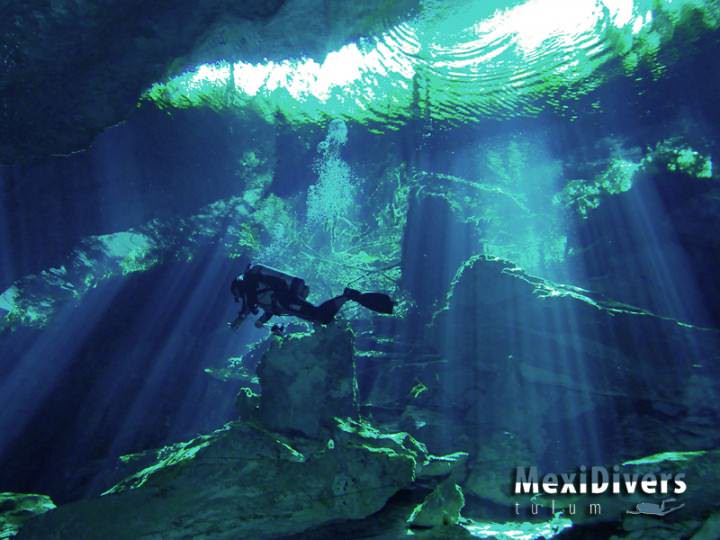 There was little life in the cave. The real beauty of the dive was the clear views of the amazing underwater formations. There were a few points when we passed through caverns barely big enough for two divers, but for the most part we were in huge openings and the dive didn’t feel claustrophobic at all. 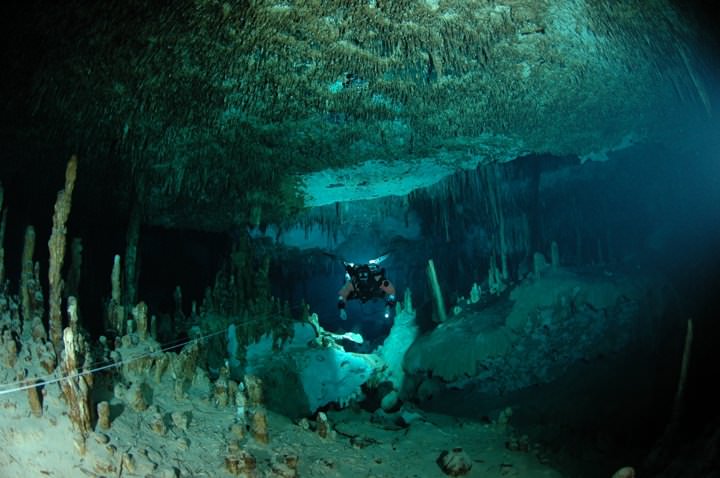 At one point we surfaced, deep in the cave and floated in a dark, underground grotto while sleeping bats squealed at us to turn off our flashlights. When we did, a small hole, leading to the surface sent piercing light down into the cave, perfectly illuminating the million year old formations like a museum exhibit. We removed our regulators and breathed the musky air freely before descending back down and finishing the dive.

As we finished the dive I looked back at the great opening in which we had just emerged from. I again felt so grateful to be able to experience such an unforgetable adventure. Eduardo joked with me: “It’s not every day that you get to have an adventure like this!” and I laughed with him, though I thought to myself quietly: “for us, it is every day”. We live this life of perpetual adventure and I am so happy that I am able to meet people like Mariano and Eduardo and live these amazing dreams day in and day out.

Both of my instructors were very professional, as were all of the MexiDivers staff. Safety and good equipment were clearly top priority and I am very glad that I chose to do these dives with them.

The eerie calm of Dos Ojos gave me time to reflect. It reminded me of not only my love for diving, but of my love for this lifestyle in which we will continue to live. Diving in the depths of a cave in Mexico is something I will never forget and I can’t wait to get under the water again in the dive mecca of Belize.

Check Out Our Video Of This Amazing Dive! 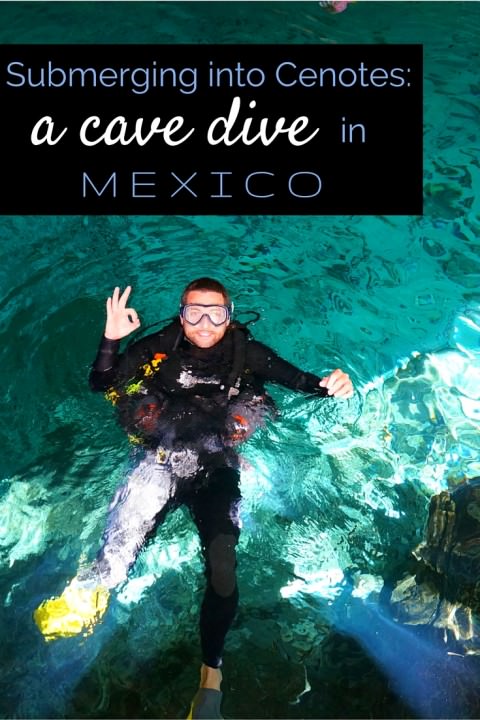 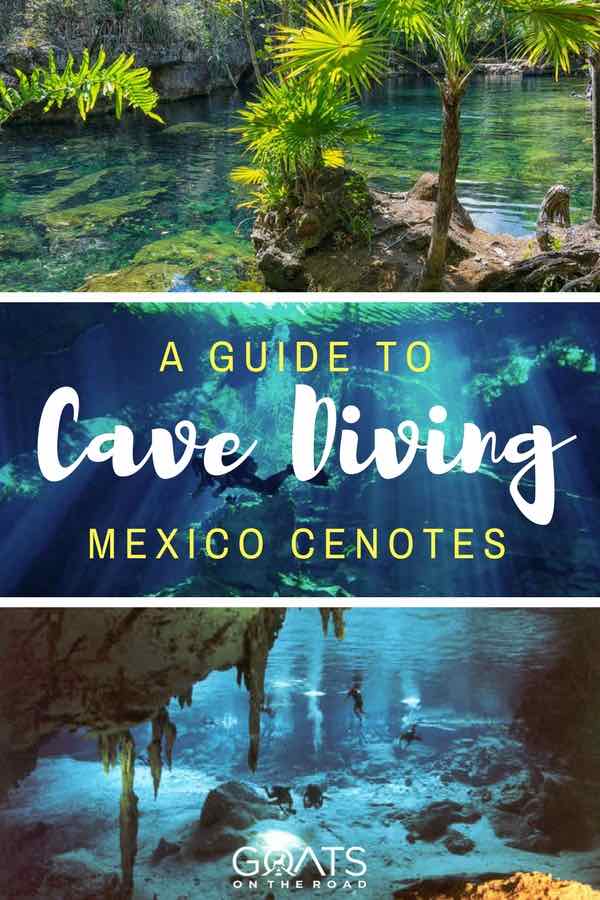 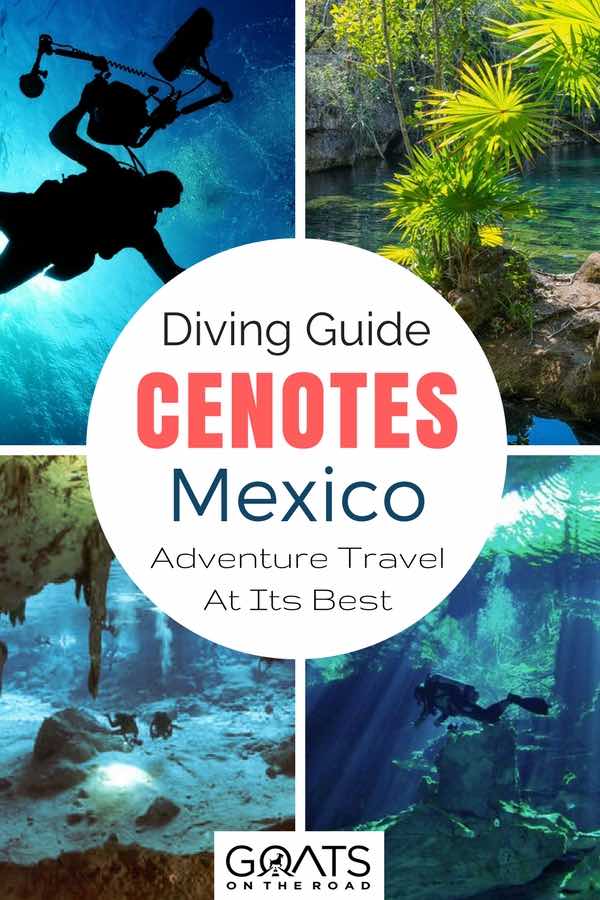 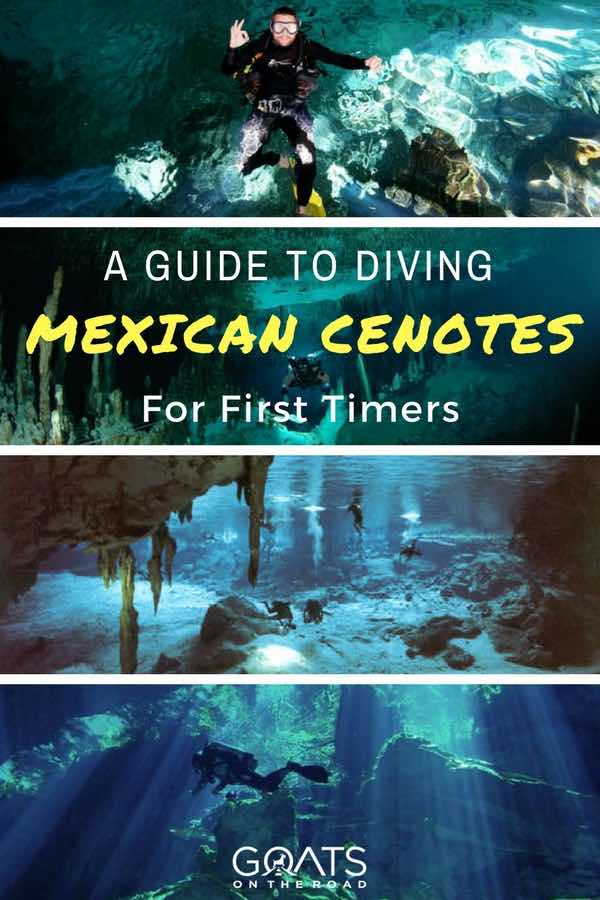 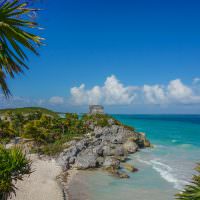 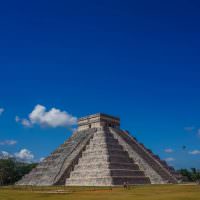 11 thoughts on “Submerging Into Cenotes: A Cave Dive In Mexico”