After spending a relaxing 3 nights on Olkhon Island and a couple of days in Irkutsk, it was time for our third (and last) leg of the Trans-Siberian/Trans-Mongolian train journey to Omsk, Russia.

Our first leg which took us from Beijing to Ulan Bator was on the original Trans-Mongolian train. Our second leg which took us from Ulan Bator to Irkutsk was on the original train as well. We wanted to experience the “true” Trans-Siberian train, plus it’s really convenient for border crossings (you don’t have to switch transportation or even get out of the train). However, the third leg we booked was just on a local train, not the original train from the 1950’s. It still runs on the same train line, but the cars and sleeping bunks are different, and the cost is lower.

When we boarded the train, it soon became apparent that we weren’t on the same type of train as before! The beds in our 3rd class bunk were much shorter and harder than the ones we had before. There was no padded back rest while sitting down. There was no door to our cabin area and across the narrow hall from us were two other bunk beds. It’s the same set up as a train in India. Not only was the actual train different, but we were the only foreigners on board!

There was however, a dining car (but the menu was all in Russian), the toilets were the same as the previous trains, maybe even a bit nicer and the cabin attendants weren’t grumpy! They were all friendly and were constantly cleaning the floors and collecting garbage.
After a couple of stops, our cabin mates arrived. An older Russian couple by the names of Alexi and Leannah. As soon as they sat down, we knew it would be an interesting journey.

After some chats, it was dinnertime and Alexi and Leannah insisted we eat some of their food. We snacked on cucumbers, tomatoes and potatoes and rye bread sprinkled with salt “the Russian way”.

Sometime during dinner Nick and I were given our new Russian names. I became Tatiana and Nick became Nicolai. I’m not sure how they figured Dariece sounds like Tatiana, but during the next 20+ hours Alexi was quite proud of himself while telling the attendants that “Tatiana and Nicolai are from Canada and Tatiana and Nicolai are going to Omsk and then Kazakhstan” – to which the women didn’t care.

After dinner Nicolai and I decided to pull out the bottle of vodka we had purchased for this train occasion. It’s practically part of the Russian train experience. Leannah insisted that we didn’t share with them and that we take it back to Canada with us. We insisted that it was fine and poured 4 shots.

Apparently we didn’t clue in to why she was insisting that we didn’t share, it would turn out that Alexi really likes his sauce! He instantly wanted more vodka and his speech became slurred – oops…

Not only was the company on the train great, but the views were marvelous. We had previously seen rocky mountains, rolling steppe, rivers and lakes. On this journey, it was dense birch and pine forests and beautiful little Siberian homes made out of wood. Apparently these are the local people’s summertime homes. They come out here from May to August and enjoy the wilderness and plant small gardens, before heading back to the cities when the cold Siberian winters hit.

After a somewhat restless sleep, we all awoke and shared some breakfast biscuits, cucumbers, bread and coffee. We showed photos of our families in Canada and where we were living in Yangzhou, China and of us teaching English there.

Alexi in return showed us his Russian newspaper, which literally had pictures of boobs on each page – except the very back and front. He asked us if we have newspapers in Canada, we said yes, but we then explained that we don’t have any half-naked women in our papers. He looked unimpressed with this comment and I’m pretty certain he won’t be visiting Canada any time soon.

Our second evening on the train was filled with vodka, more eating and 6 new Russian friends. We always find it amazing just how much can be communicated between people when there is no common language spoken. We learned a lot from hand motions and the very basic words our new friends knew in English. We talked about Pavel Bure (famous hockey player), our jobs, tattoos and even religion.

One thing we did notice is that Russians are much smarter when it comes to drinking alcohol. Instead of chasing a shot with pop or juice, they eat something. So they’re constantly eating while drinking…and I’ve gotta say, chasing vodka with a piece of cucumber or bread was perfect!

After travelling for 39 hours, we arrived in Omsk. It was 6:30am local time, but 4:30am from the time we just came from. Needless to say, we were tired, and hung over. We only spent one night in this city to break up our long journey from Irkutsk, Russia to Astana, Kazakhstan. We wandered around the city, enjoyed our awesome hostel, got caught up on emails and blogs and booked a bus for the following evening.

It was time to visit our 3rd country of the trip, the home of Borat!

Have you taken the Trans-Siberian Train before? What was your journey like?! Tell us about it below.

MONGOLIAN MEMORIES: A ROUND-UP OF 30 DAYS OF TRAVEL

TRANS-MONGOLIAN TRAIN: ALL YOU NEED TO KNOW

Check Out Our Video “Taking The Trans-Siberian Train!” 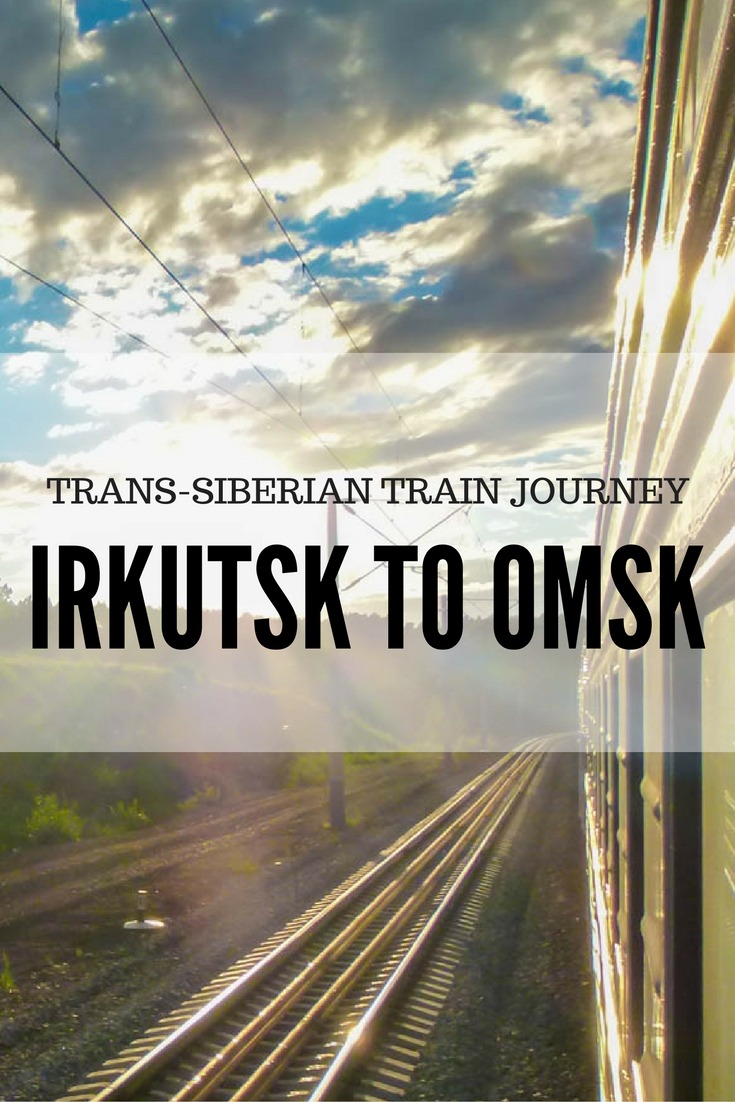