From Traveller to Tour Guide: My India Experience

“I’m on a trail-blazing journey!” I kept reminding myself. My hands were shaking with nerves and excitement as I boarded a plane in March of 2013 for a 4-month journey through India. India, a country that was completely foreign to me. In fact, I barely even knew anyone who had travelled there. But it was up to me (and my travel partner) to discover the magic that was India.

Our goals were to find engaging and legitimate short-term volunteer opportunities, and to begin the task of developing an adventure+volunteer tour for Let Live Travel. It sounded like the ideal scenario just a few short months before, but as a dream became reality, I was petrified.

I’d spent a decade backpacking, and had always dreamed my ventures would take me to this mystical land; but as my plane took off I realized, regardless of my studies, I still had no idea what to expect.

5 flights, 4 layovers, and 42 dreadfully long hours later, I landed in India for the first time. Cursing myself for not choosing a more direct route, I drug my feet through the airport pondering how I’d stay awake long enough to catch a cab. But as I stepped outside, I was instantly jolted to life. The heat and the sounds and the smells of India crashed into me.

After bartering with a herd of cabbies and finally agreeing on a price, my driver slowly and carefully pulled away from the airport, merged onto the highway, and then all rules of the road were lost. 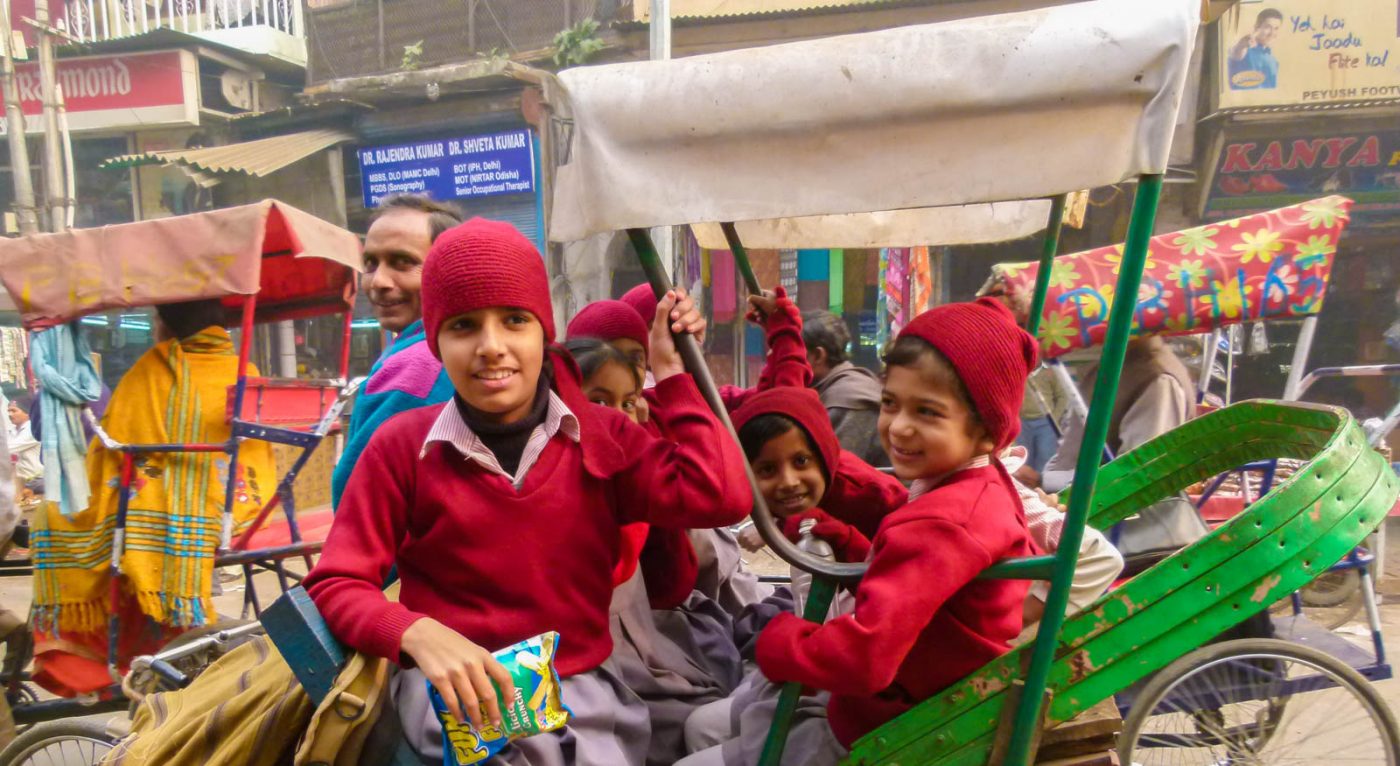 Whipping between cars, accelerating around corners, disregarding the ‘suggested’ red lights… I certainly was not in Canada anymore! As we made our way through the streets of Delhi, swerving around sauntering cows and fruit vendors right on the road, it became abundantly clear that this was indeed going to be the greatest and most fulfilling culture-shock of my life.

At first, India was overwhelming chaos, or as some accurately describe it, an assault to the senses. I stumbled back and forth through the web-like narrow pathways of shops, attempting to gain my bearings. It was all dizzying: one never-ending rickshaw horn, an explosion of colours, extreme over-population, curious and unwavering stares from the locals, and a smell that was, well, thick.

Those first few days, I found myself wide-eyed and mute, simply trying to absorb my surroundings. 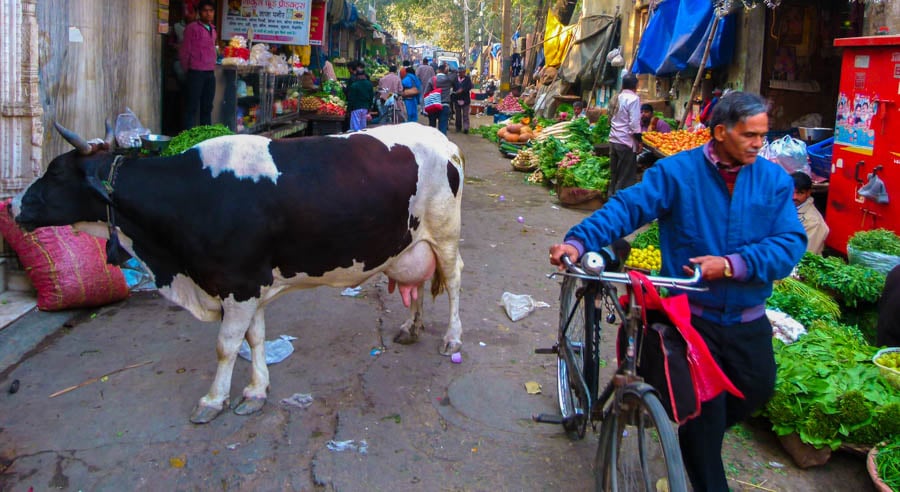 As the first week passed, I slowly felt my mind and body start to accept India. Over time, my brain started to slow in order to make sense of the beautiful chaos. I started to feel calm in my surroundings, now experiencing the world in a completely new and refreshing way. It was this moment, when I truly let India in, that I could feel myself falling madly and deeply in love with this country and its people. Well, that plus my first bite of dahl tadka, a delicious Indian staple.

We had ventured through Northern and Central India to connect with some local non-profits, and I felt myself sensing the end, not wanting for it to come – not yet. The locals were overwhelmingly hospitable, and I felt that because of my work with local charities, I was meeting some of the most inspiring and kind people this world has to offer.

Although I had read it time and again, I was still shocked at how incredibly diverse and huge India was. Whenever I found one location I loved, the temptation to stay-put was strong. But I knew I had to push on, and came to learn that sometimes the longest treks yield the greatest results.

For me, that rewarding journey was travelling deep into Himachal Pradesh into the Himalayan mountains. I was thrilled to breathe in the fresh, crisp mountain air. I was even more thrilled to test out the abundance of activities: the mountain peaks were calling out to be hiked, beckoning to me to find their endless hidden waterfalls and natural pools. It was an outdoor enthusiast’s dream! 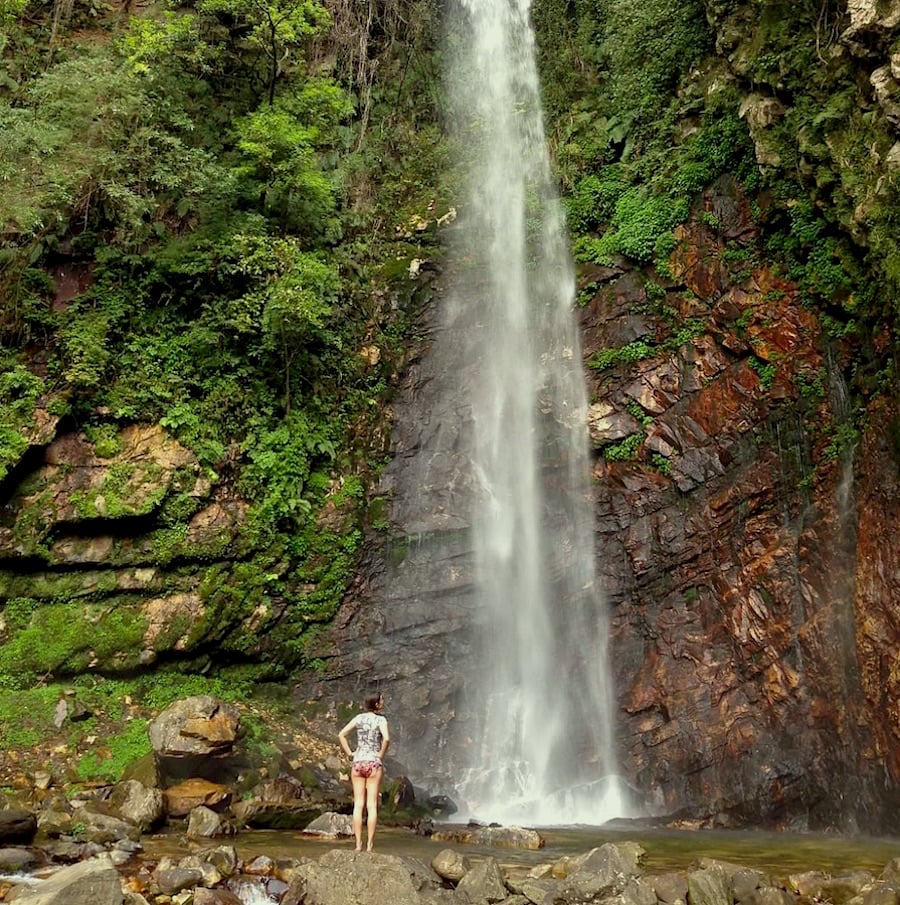 What made the experience even more rich, though, were the moments I connected with locals through the countless volunteer opportunities we discovered. Over time, we were able to find the most effective programs created by local Indians to aid with the Tibetan refugees’ transition into India. Building relationships with these selfless and caring locals really highlighted the hospitality that is India, and working with their organizations brought purpose and meaning to my days.

And then there was the long overnight train ride that brought me to Varanasi. This is one of oldest cities in the world and the beating heart of the Hindu universe. Varanasi is where I truly found the strongest dose of an Indian cultural experience.

Spreading along the holy river Ganga, this sacred city is bursting with unrelenting and unabashed cultural rituals and religious ceremonies. It was here that I had my first experience with a Sadhu (holy man), receiving a blessing, a smoke, and of course diving in to a philosophical discussion. 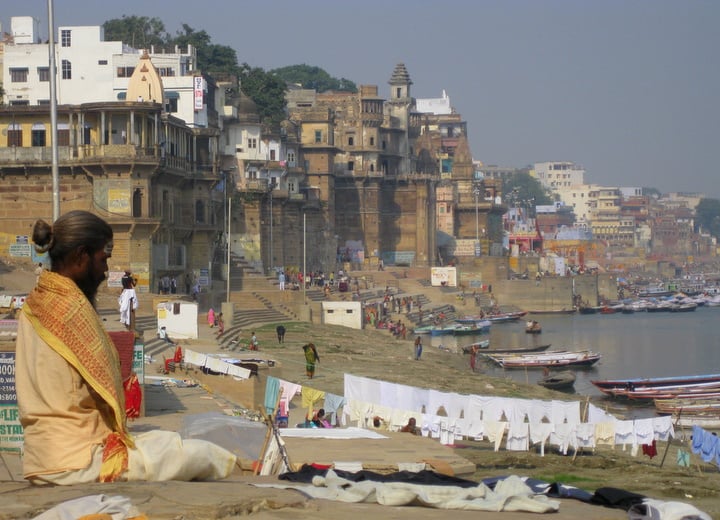 An equally incredible journey was travelling west to the edge of the Thar desert, to a city named Pushkar. In contrast to Varanasi, Pushkar was a marvel because of its laid-back feel and slower pace. It was also a place of firsts for me.

It was where I first entered into true desert-land, and first hung out with the chillest of animals: camels. Even more, here we were lucky enough to meet and befriend an incredible local who runs after-school programs for less-fortunate children. Heading out-of-town with him to volunteer at his school for a few days, I was able to get to know the families of these small farm-towns, and grew to better understand their way of life. 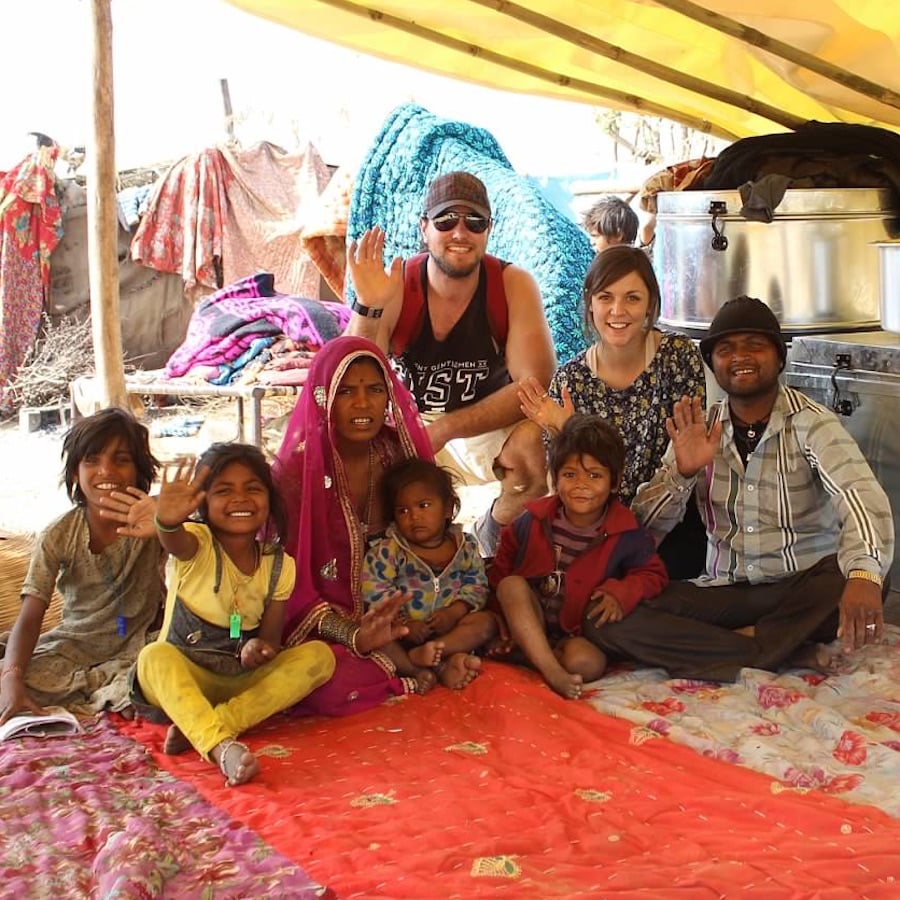 India was surpassing my expectations, in the most rewarding and unpredictable of ways. There were inevitably endless challenges in travelling this new, all-consuming country and culture, and some days were completely exhausting and unforgiving. But as all travellers know, it’s all part of the experience and reward.

And I knew, even then, that I would be coming back many, many times more.

Showing Off ‘My’ India

The time had come. I was at long last going to share my India with others. After a few more ventures back to India, in February of 2015, the Let Live Travel adventure & volunteer tour was finally in motion!

As I walked with my new tour group from the airport to our awaiting cab, I felt those familiar shakes of nerves and excitement. The group was waking up from their journey across continents. Their eyes started to widen and their chatter quickened. 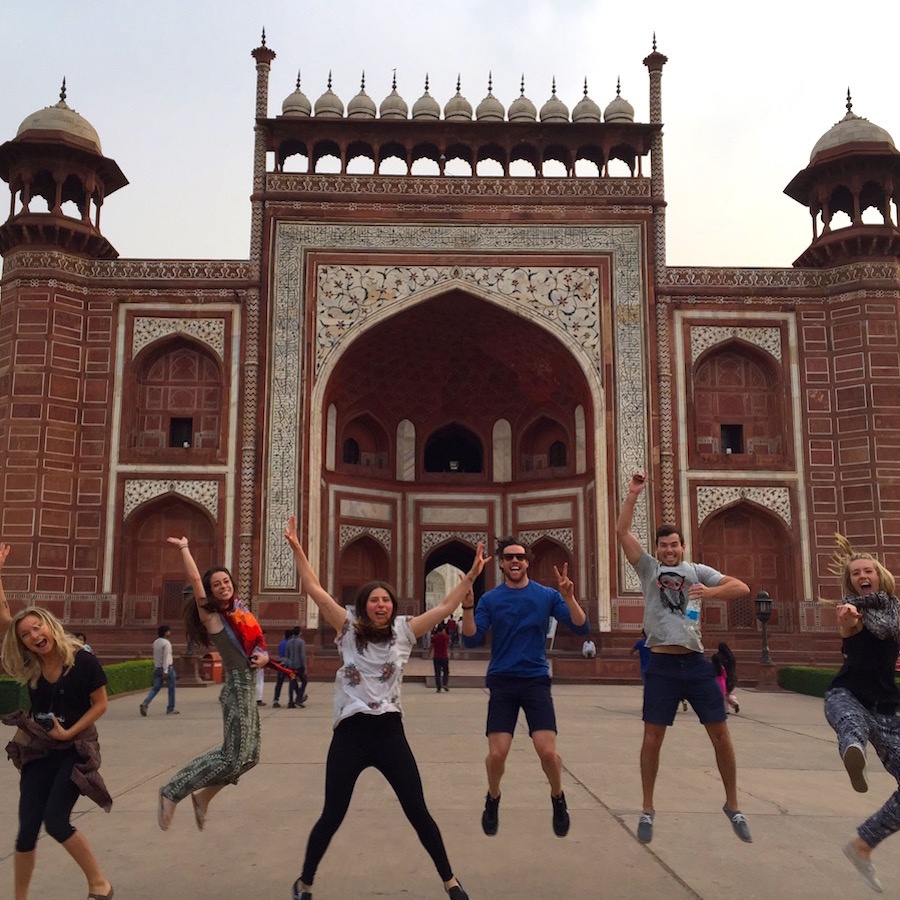 We pulled away from the airport, and the cab driver began to quickly swerve between lanes, accelerate around corners and disregard road signs as we made our way through late-night Delhi.

Watching their stunned faces, a huge smile spread across my face; it was like reliving the past, reliving those first powerful moments of India. Oh, the wonders they were in for! 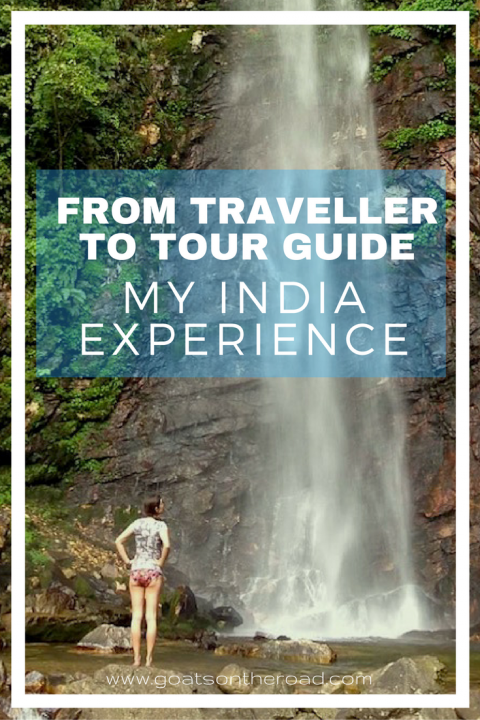 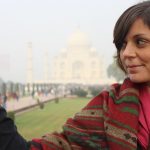 Hello, my fellow travel-lover! My name is Shawna Aylard, and I am the Founder of the Canadian non-profit tour company, Let Live Travel. After over a decade long love affair with travel, I saw the need and desire from travellers to engage with cultures in a deeper and more impactful way. Being all too familiar with that feeling, I felt compelled to provide altruistic adventurers with a more accessible option for what we now term ‘sustainable travel’.  Beyond that, I am a University of British Columbia Psychology and Linguistics graduate, a certified yoga instructor, food is usually my favourite part of the day, and I very seriously want a pet goat named Poppy.

19 thoughts on “From Traveller to Tour Guide: My India Experience”