“Can I get all of the virgins down in front!” Nick and I both looked at each other, certain that we weren’t virgins in the traditional sense, but soon realized that yes, we were virgins when it came to Hashing.

The Hash House Harriers are an international group of social runners and walkers. It all started in 1938 in Malaysia when colonial British soldiers decided they needed to run off the booze and excess food they consumed during the weekend. The group in Grenada have been meeting every Saturday since 1985 to participate in a run/walk through some fantastic jungle and beautiful terrain. This type of exercise is called “hashing” and the participants are called “hashers”.

This is a great way to stay fit, be part of a fun group and be introduced to some unknown parts of the island. It’s definitely one of the most unique things to do in Grenada. It’s also the perfect way to undo all of the cleansing you did during the hash by enjoying ice-cold beers at the end. In fact, it’s practically mandatory with a slogan like this one:

This was our first hash since we started living in Grenada 5 months ago, and when we pulled up at the starting point (which we learned is always a rum shack) and saw the big group of people, the blaring music and the delicious local food being prepared, we knew we had been missing out!

We made our way towards the stage as the Hash Master gave a speech and explained the rules to us virgins.

Rule #1 – If you’re wearing new shoes, you pay the price for being a “newbie” by having to drink a whole beer out of your shoe! Luckily they didn’t notice Nick was wearing his new Keen hiking boots or he’d have to hike with beer squishing around in his shoe, which was the fate of one unsuspecting hasher who had to do just that.

Rule #2 – No picking any fruit along the way or taking any shortcuts! If so, you’ll be penalized at the end by receiving a “down-down” (typically you have to get down on your knees and drink a full, warm beer out of a bucket)

Rule #3 – Dogs must be on leashes, and the leashes must be attached to a hasher.

After a the explanation, the 100 or so hashers took off! There were two trails, one for runners and one for walkers. We decided we wanted the best of both worlds and chose to walk on the runner’s trail.

As with all hashes, this wasn’t a well-worn trail and in order to figure out where we needed to go, and which trails to take, we were to follow piles of shredded, white paper, which acted as markings along the route. Sounds easy enough, right? Well, throughout the trail whenever there was a T-junction, we would find a big circle of paper, rather than just a pile. This meant that there were two ways to go and we had to choose the correct one! If we ended up on the wrong path we’d arrive at an “X” and we’d have to go back to the junction and continue on the right one.

There are some key sayings that one must know during a hash:

“Are You?!” – shouted up ahead to fellow hashers if you’re lost or feel as though you’re on the wrong trail (we yelled this more than once during the day!)

“Checking” – if you’re checking to see if the trail is correct.

It was pretty funny to hear people yelling out from the bush during the hike, with the locals from the various neighbourhoods smiling and laughing at us.

We passed by crumbling buildings overgrown with twisting vines, beautiful wooden homes and through numerous banana and nutmeg plantations. We laughed with local children, fought off stray dogs and mingled with farmers and their livestock. But above all, we sweat! The humidity was so high that even if we were standing still, we were dripping with perspiration.

I couldn’t even count the amount of piles of paper we passed by, or the amount of times that we were unsure of the route, which made it all the more fun! Spare Dog was loving the new adventure just as much as we were…until we arrived at the river bed. For whatever reason, he hates the water. We thought it was a river crossing, meaning he would only have to get his paws wet one time.

It turned out that the riverbed was a whole section of the hike! After slipping a couple of times on the rocks and walking in water as deep as his belly, Spare had had enough (and we can’t blame him, we wanted him out of there too). Nick and I searched for an alternative route and ended up meeting up with the walker’s trail, which just so happened to be water-free!

The whole walk was stunning with great views of various farmland and of the Atlantic Ocean. After about 2.5 hours of walking, laughing and enjoying the company of our new friends, we arrived back at the rum shack…only to realize that the 6 of us were dead last (also known as “DFL” in hash lingo!) Not second to last, not ahead of the elderly or the children, we were just plain last. We were having such a good time taking it all in that we didn’t realize how slow we were going.

On arrival, we enjoyed an oil down, which is a local dish of meat, dumplings, breadfruit and greens and sipped on some beers before hearing once again “all of the virgins up to the front please”.

A speech was given and we received a hilarious certificate, for having completed our first hash. All of us newbies posed nicely for the camera, and without warning, were suddenly surrounded by fellow hashers spraying us with beer! Nick and I opened our mouths, but didn’t get much more than a sip.

We’re both proud to have finally lost our hashing virginity in Grenada, and being sprayed by our favourite beer at the end of the long walk was the perfect end to another great day in paradise. 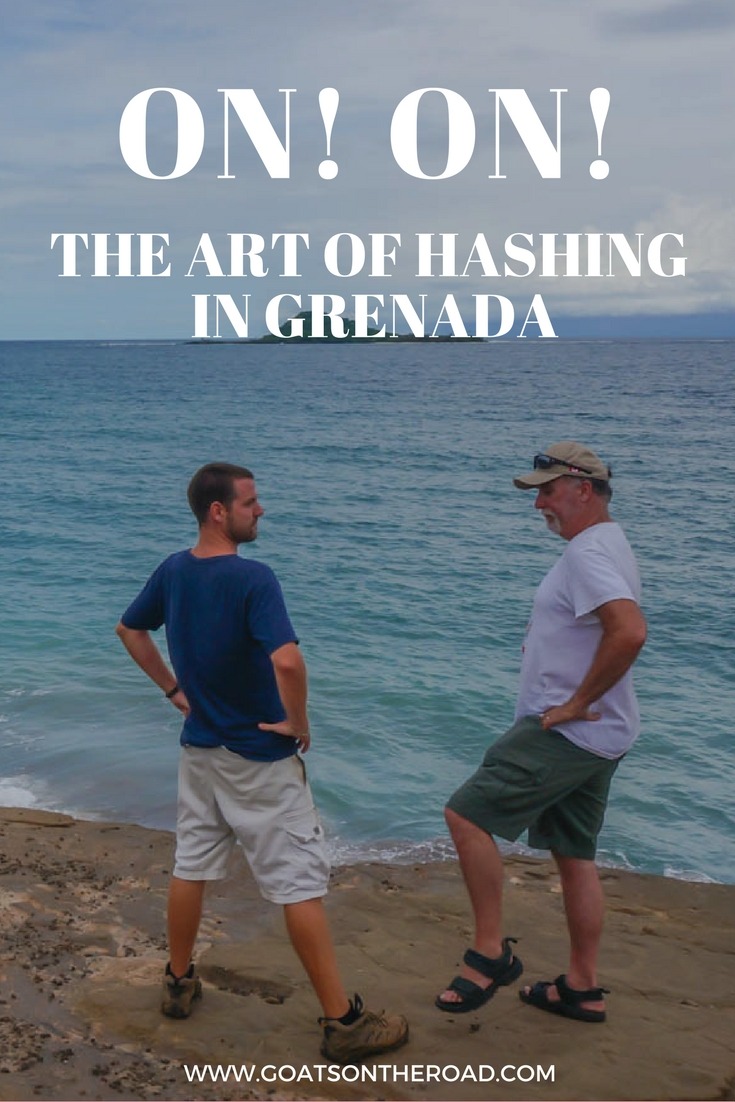