From Burkas to Bikinis: Reflecting On Our Recent Travels

It’s the middle of the night in Iran and I have to go to the bathroom, which happens to be down the hallway.

Fumbling around in the dark I try to get dressed without waking up Nick. I search for my headscarf and wrap it around my hair to ensure that no strands are showing. By this point, I’ve practically burst by the time I make it to the toilet!

It’s the middle of the night and I have to go to the bathroom, which happens to be outside.

I get out of bed wearing my teeny tiny bedtime shorts, tight tank top and no shoes. I open the door and leave. I’ve made it to the bathroom easily, quietly and without bursting at the seams!

We had a realization the other day. During our four years of travelling, Nick and I have mainly spent our time in conservative regions: Asia, Africa, the Middle East and the Sub-Continent, and we’ve (I’ve) had to travel around being conscious of how we (I) act and dress.

In Southeast and Northern Asia, some women wear short shorts, sleeveless tops and tight-fitting clothing, but they typically don’t show any cleavage.

Couples refrain from showing any affection when in public, even holding hands is uncommon.

In China especially, it’s rare to see local women drinking alcohol. We both like to “do as the locals do”, so we refrained from showing affection in public and I barely showed any cleavage, but I did drink alcohol!

In Africa, it was typical to see women wearing whatever they wanted. Although, parts of the continent are Muslim and therefore we had to dress accordingly. We rarely, if ever, saw local couples showing public displays of affection.

In the Middle East and Central Asia, the majority of the population are of the Muslim faith.

It would have been very inappropriate to show too much skin, or to wear tight-fitting clothing. In Iran, it’s the law for women to wear a headscarf, but luckily for me, it was winter time so I didn’t mind the extra warmth!

Showing affection to your significant other in public is a definite no-no as well.

On top of the strict dress codes and “moral” codes, in the Middle East drinking alcohol is frowned upon (and in some cases, illegal). Also, Muslims don’t eat pork…so bacon was out of the question!

In the Sub-Continent, in order to avoid unwanted / negative attention from the local men, I covered up and wore appropriate clothing.

Especially on the beaches in India, the attention from men was a problem. You definitely need to be prepared before going to India!

In Sri Lanka, it was much easier for me to enjoy the sand and sun without worrying about the gawking eyes of local men. Showing affection in public here is also a no-no.

Beef is rarely eaten in the Hindu religion and we hardly ever found it in Nepal and India.

Can you keep up with all of these rules and regulations?!

Not only was wearing certain clothing or not being affectionate towards each other a bit difficult at times, finding western comfort foods was quite a task.

Although we absolutely love trying new cuisines from around the world (Mexican, Indian and Chinese are some of the world’s best foods), there always came a time when we just felt like some sushi, pizza or a hamburger!

Most of Asia, Africa and the Middle East wasn’t able to satisfy our western food cravings.

Since coming to Mexico and Belize, we feel like we’re on a holiday!

This is our first time in Central America and we’ve been here for 2.5 months so far. We both weren’t sure what to expect and hadn’t experienced Mexican or Caribbean culture before (outside of resorts).

I’m pleased to say that we’re both having an amazing time and are grinning from ear to ear!

I can definitely see why many people book holidays from North America or Europe to this part of the world.

Not only are there no restrictions on what women can wear, what foods can be eaten, or how couples should act in public, there’s just an ease and relaxed feeling when travelling in this region.

Who wouldn’t want to travel here?

The beaches are covered in pure white sand, the water is some of the clearest we’ve ever seen and the marine life is abundant! Outside of the beach towns, we’ve enjoyed a few of the many colonial cities in Mexico.

Valladolid, Merida and San Cristobal were some of our favourites. We loved wandering around soaking up the colourful buildings and traditional clothing.

We’re both interested in history and spent some time gazing in awe at seven ancient Mayan sites in the region, one of which was a Wonder Of The World!

Lively music is played in restaurants, bars and on the streets. We’ve even seen people spontaneously dancing!

The local food and western foods are all very satisfying. Gone are the days of horse meat, unseasoned foods and fried rice that we became accustomed to in Central Asia.

Buying a bus or boat ticket has never been easier. Here in Belize, everyone speaks English and in Mexico, most people in the tourism industry spoke English, which was great because hablamos muy poco español!

We’ve also been sampling the local beers, liquors and coffee of the region as well! Everyone can drink alcohol openly and freely here, religion and customs don’t dictate otherwise.

While walking hand-in-hand, we have to remind ourselves that we’re not on holiday and that this feeling isn’t going to end…this is just how life is in this part of the world.

Will we go back to places where we have to dress & act conservatively?

Even though there are certain restrictions we have to abide by in certain areas of the world, travel is all about experiencing different cultures and ways of life.

It may not have been easy, or felt like a vacation when we were in places like Tajikistan, but if we never travelled there, we would have missed out on so many experiences.

I can’t imagine having never seen the towering snow-capped Pamir Mountains, devouring goat meat from a bucket, or meeting people who actually live in yurts in the middle of nowhere.

Experiencing unique places, diverse cultures and different religions is what travel is all about.

We wouldn’t change our past travels one bit. Everywhere we’ve been has been incredibly interesting and adventurous. Although it may not have been easy at times, our travels are always memorable and exciting.

…but for now, we’ll be on the beach with a drink in hand.

What do you think? Should we only travel to places where we are able to act how we want, eat what we want and dress how we want? 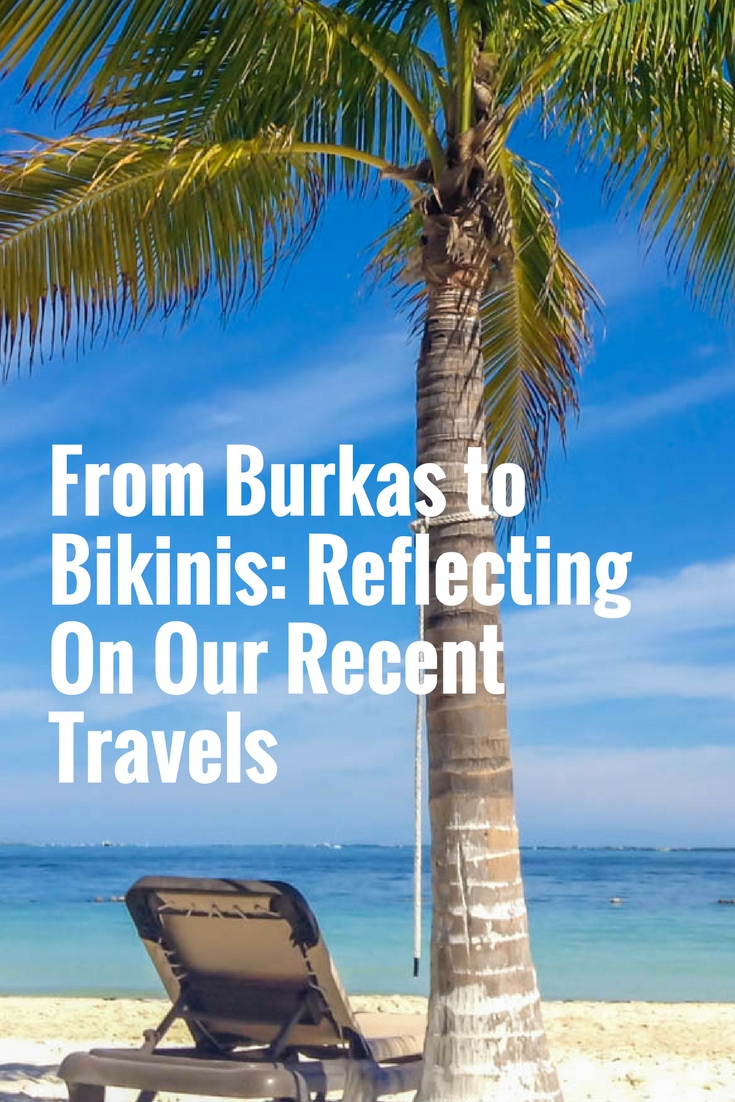