How To Spend 6 Days in The South of Spain

Now that summer has arrived in Europe, many people are trying to decide where they’ll go for their next Euro trip. While the north end of the continent is still seeing lows of 12°C, the southern parts are enjoying a balmy 30°C throughout the day.

Spain is one of the cheapest countries in the world to visit and it’s also on our list of our favourite countries for food, and the south has some of the best value and best dishes, so don’t miss it!

After our recent trip through Eastern & Central Europe in the winter, we know that this warm weather is a welcome relief to the region and it makes us think back to our time in the South of Spain.

In this article I’m going to explain how we spent our 6 days in the south, so you can follow in our footsteps (or hoof prints) and have an equally awesome vacation.

Coming from North America, it’s not so cheap to get to Spain. From the US it’s typically around $850 at this time of year for a return trip from the east coast (particularly New York).

While from the west coast of Canada it’s around $1,100 USD return.

Of course, us in the far west are never as lucky as our European friends who can typically fly to Madrid for the weekend for a little over $100 with Ryan Air.

None of these flights are overly expensive, especially considering the fact that Spain offers some real value for money. A single traveller can afford hotels, food and entertainment in this part of the world for less than $75 / day.

There are many options for accommodation in Spain, from affordable but comfortable hostels to luxury resorts, guest houses and apartments. I highly recommend staying in Malaga because it’s the perfect place to base yourself while exploring the beautiful area around southern Spain.

Hostel Malaga City is a lovely hostel set right in the heart of Malaga. With double rooms getting as low as $55 / night, it’s a bargain for the price. From here you can easily walk to the main sights of the city and you can easily get out of town and visit the surrounding areas. 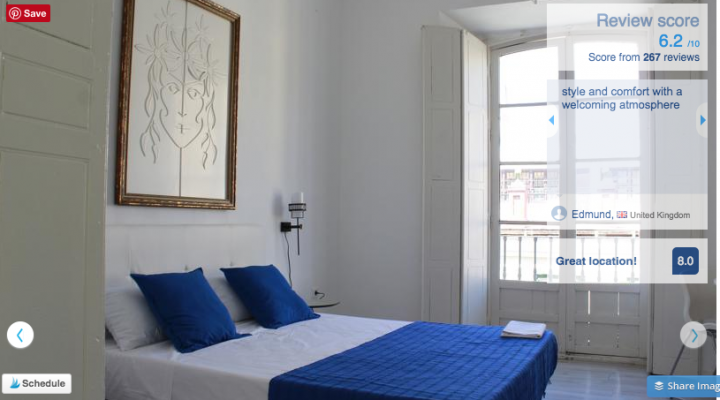 The rooms here are a little bit more dated but you really can’t beat the location of this hotel and it gets great reviews on Booking.com. You also get a few more luxuries here than at the hostels, like satellite TV and private bathrooms. 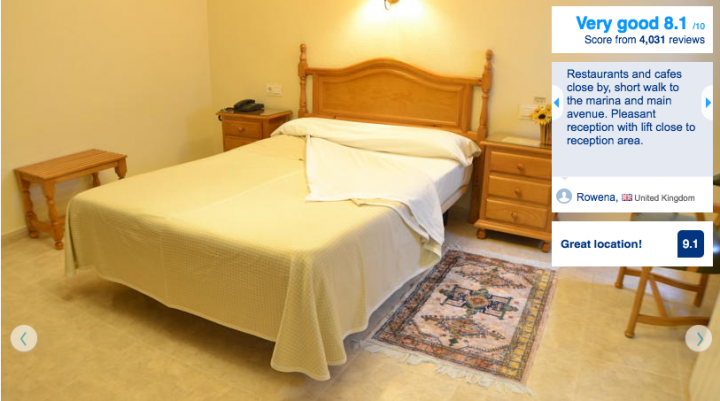 The highest rated apartments in Malaga, these modern flats are right in the heart of the action and while the nightly rate is higher than the other ones listed in this post (around $125 / night), you’ll save some money by cooking meals for yourself in the full kitchen. 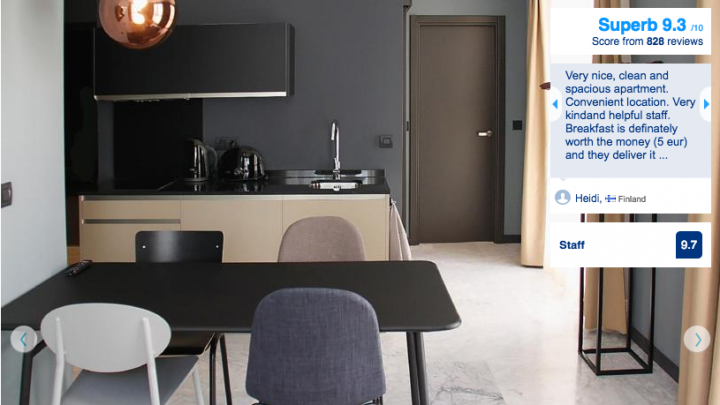 When we were in Malaga and the surrounding areas in 2012, we got around by bus. The cities are well-connected and wait times aren’t too long. Alternatively, you can rent a car for around $21 / day and have a lot more freedom to see the places we’ll list in this post.

Driving in the south of Spain is straight forward, the highways are superb and the towns and major sights are well sign posted.

Where To Go & What To See

Finally we get into the fun stuff. The south of Spain is one of Europe’s most scenic destinations and you’ll fall in love with the food, the coastline and the architecture. I’m going to list a few of our favourite towns that you can easily see in a 6 day trip, as well as some major things not to miss in each.

Seeing as you’re based in this town, you’d be crazy not to explore it. The capital of the province with the same name, Malaga is the second most populous city in Andalusia and the 6th largest city center in Spain (over 500,000 people).

The city itself has a history that spans over 2,800 years, making it one of the oldest cities in the world. A center of culture and arts for centuries, this is the birth place of the internationally acclaimed painter and sculptor Pablo Picasso, famous Hollywood actor Antonio Banderas and Hebrew poet and Jewish philosopher Solomon Ibn Gabirol.

Alcazaba is a Moorish castle from the 11th century and it commands a hill right in the center of town. From the ramparts of the fort, you’ll find superb views of the city and the lush gardens around the property. This is one of the best-preserved castles of its kind in Spain, so don’t miss it. Entrance is €2.10 but free on Sundays.

Picasso Museum should be another place that’s set firmly on your Malaga itinerary. Seeing as the man was born here, it’s no surprise that you find Spain’s best exclusive paintings and exhibitions here. Entrance is €9.

The Roman Theater is situated right under Alcazaba and is open anytime.  Entrance here is free and you can enter the attached building and watch a short film and check out some artifacts as well.

Probably our favourite city in the area, Estepona is absolutely stunning. Spend some time exploring the narrow alleyways and stopping in at one of the many restaurants for some tapas and wine. There’s not a ton of stuff to do here, but you can make a stop here as part of a visit to the next town as well. 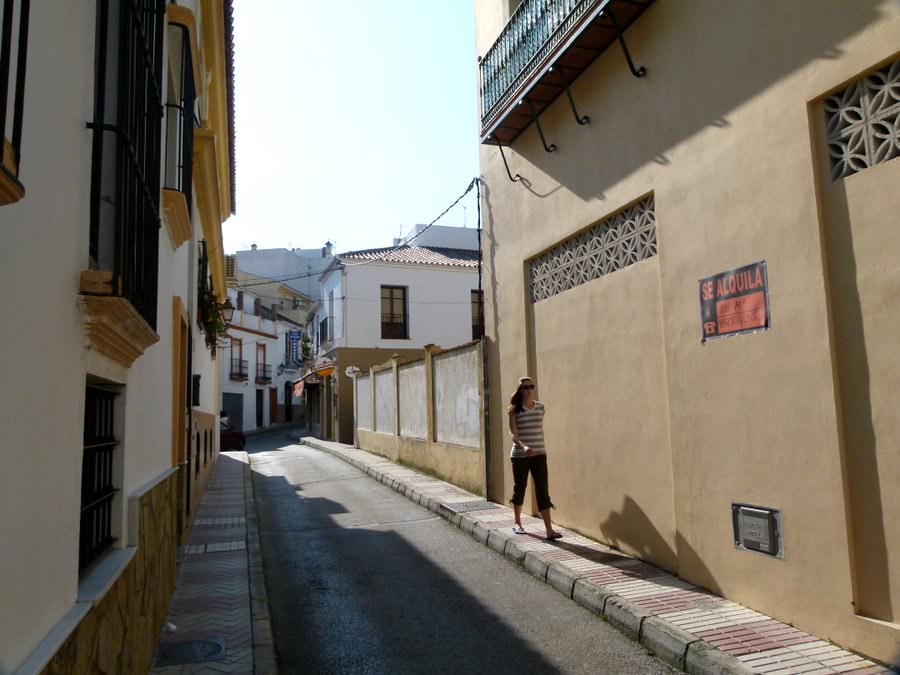 The Orchid House is at the center of some beautiful botanical gardens which were recently developed right in the middle of Estepona. The centerpiece of the garden is a huge glass dome which is home to the Orchid House itself. The entire area is a great place to walk around and enjoy nature complete with a mini lake and waterfalls.

The Paseo is another great place for a walk, but this one is along the sea and caters well for families, couples and solo travellers alike. There are a few climbing areas on the beach, floating play areas, giant chess sets, and pedal boats available in the Summer.

Probably the most dramatic looking town in Andalucia, Ronda is set on a massive gorge, overlooking a cliff and the Andalusian countryside. The gorge makes for an excellent walk, but check the river height before committing to going all the way down to the bottom as it can smell of sewage during dry seasons. 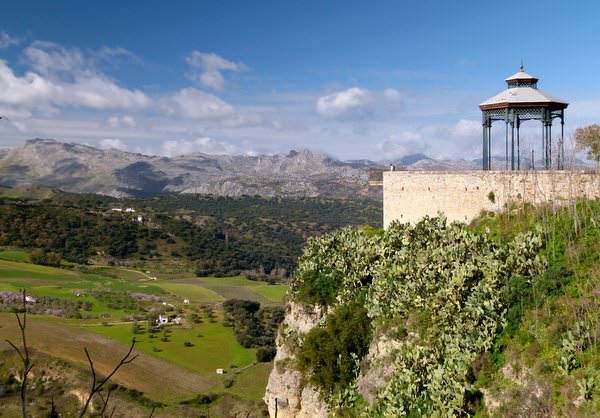 Puente Nuevo is the large bridge that crosses the gorge and you really can’t miss it. It’s pretty much the jewel of this photogenic town. When you’re on the bridge, check out the small museum and don’t forget to look down, it’s 100 meters to the gorge floor below!

Plaza de Toros is the oldest and one of the most famous bull rings in Spain. In a country with over 100 of these stadiums, that says a lot. You can visit inside of the ring for €6.

Banos Arabes is one of the best preserved Roman-style baths in Spain and it’s a place of “purification” for travellers entering the city.  These baths are arguably a bigger claim to Ronda’s fame than Puente Nuevo or Plaza de Toros and definitely shouldn’t be missed by visitors. The name means “Arab Baths” as the Moors of Spain were Muslim and there used to be a mosque next to Banos Arabes.

No not the Caribbean Grenada where we spend half of the year, this Granada is a city at the base of the stunning Sierra Nevada Mountains and has been inhabited for over 2500 years. While the mountains themselves are home to Spain’s best ski resort in winter, during the summer this area is a mecca for hiking, rock climbing and adventure.

Alhambra is the most famous attraction here. A fortress complex that housed the Moorish Palace for the emirs when the city was under Islamic rule.

The Muslim neighbourhood is a great area to walk around and explore numerous cathedrals and castles. Don’t miss the many tapas bars and flamenco shows which are some of the tastiest and most entertaining in the region.

With affordable flights, beautiful accommodation and rental cars for a little over $20 / day, you can make a trip to the south of Spain happen without breaking the bank. Enjoy a little sand, sea, mountain, culture and cuisine in this famed region of Europe. 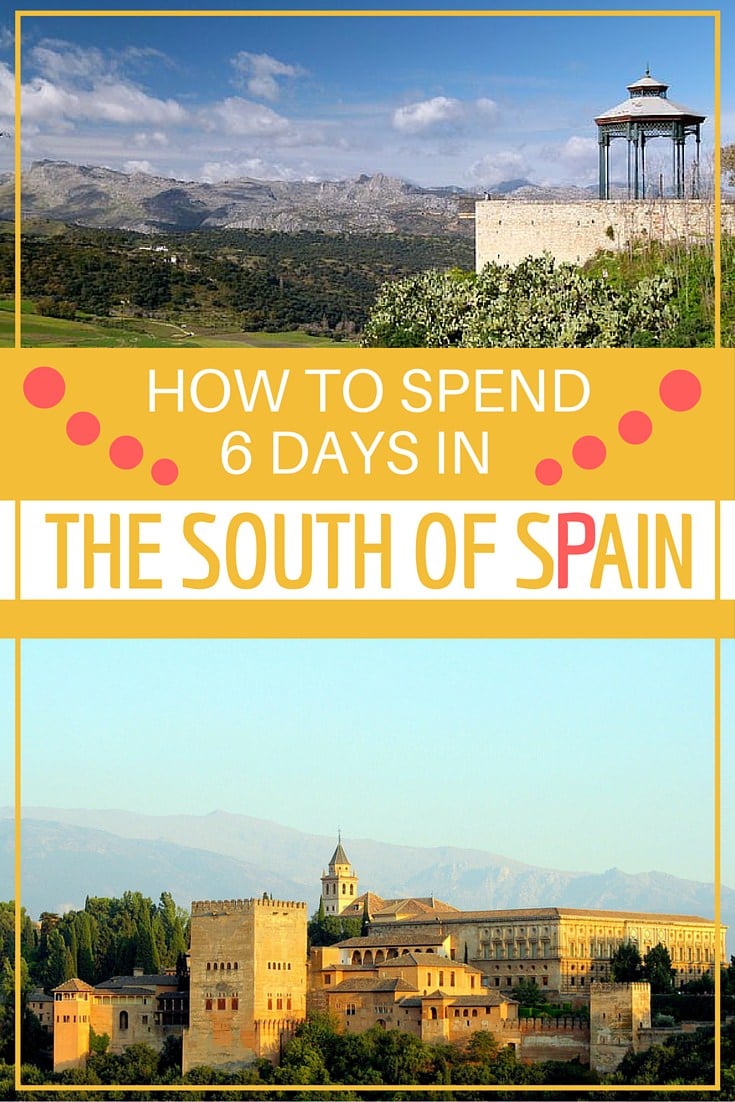