Only 3 days until Christmas? What? It can’t be! There’s no way that this year is almost over…where did the 12 months go? Was it not just yesterday that we were cleansing our bodies and minds at an Ashram in India? Weren’t we just celebrating Christmas with chai tea and Domino’s Pizza in Jaipur? Oh no, wait, that was a whole year ago. I guess time really does fly when you’re having fun!

Sitting here in our Chinese apartment as the New Year approaches, I felt it necessary to reflect on some of our fondest memories from 2012.

When we think of the past year, it’s sort of a blur. 2011 runs into 2012 and we forget where we were and when. We find ourselves frequently looking at each other in hopes that the other will have some answers! It’s time to get our thoughts (and dates) in order. Here’s a roundup of our epic year.

2012 started off perfectly. We were in Rishikesh, India at an Ashram doing yoga and meditation. We did a countdown to the New Year while sitting by the holy Ganges River meditating and thinking about what we would like to see happen in our lives for the next 12 months. It was definitely the most tame New Year’s Eve celebration we’ve ever had! But one we’ll never forget.

Before we knew it, our 5 weeks in India had come to an end and we flew to Yangon, Myanmar on January 22, 2012. Deciding whether or not to travel to Myanmar due to the political problems was something we contemplated for quite a while. After doing some research and realizing that many of the sanctions had been lifted against Myanmar and that things were heading in a positive direction for the people, we booked our flight to Yangon…and didn’t regret one minute of it. Boating through stilted villages, witnessing age-old fishing techniques, sipping wine at one of the few wineries in SE Asia, teaching English in a rural village and cycling through ancient ruins are just some of our  memories from this fantastic country.

We enjoyed 3 weeks in Myanmar before heading east to the neighbouring country of Thailand.  This may not be one specific memory, but the 1 glorious month spent on stunning Koh Phangan Island is a time in our lives that we will cherish. Explore, relax, swim, eat and repeat. Ah, the good life!

After hanging out for a month, we figured it was time to move on to the next tropical paradise. We boarded a plane on March 15, 2012 and arrived in Manila. Enduring 2.5 weeks of torrential downpours in the Philippines wasn’t exactly what we had in mind when we booked our flight to this archipelago. However, once the skies cleared, we enjoyed 3 weeks of pure blue sky and sunshine. We’ll never forget being dropped off at a pristine, secluded island for 30 hours. Camping on the beach under the stars, building a bonfire and enjoying the sunset. It was a perfect excursion!

On April 23rd, after almost 6 weeks of travel through the Philippines, we were on another flight. We were headed to the modern city of Hong Kong, a place that we always hear about; whether it’s in movies, books or from other people. We had somehow never been here and when we flew over the city and saw all of the lights from the plane, we knew it was going to be a great visit! The hustle and bustle of the modern metropolis mixed with the ancient monasteries and temples is something you have to see to believe.

We traveled to China by train from Hong Kong on April 29th. We enjoyed our 3 weeks spent in what would become our new home. The highlight has to be marvelling at The Great Wall Of China. It was right then and there that we realized just how out of shape we had become in such a short period of time! The hike up to the Wall was definitely exhausting but absolutely worth it.

We spent a few more days in Hong Kong before boarding a plane on May 23, 2012. We took a time-out from travel and were on our way back to Canada to visit with (and be spoiled by) our friends and families. There’s just something about going home that makes a weary traveller feel rested and ready for the next adventure!

After a rejuvenating month in Canada, we were boarding yet another plane to Hong Kong…and then onto China. The 2nd half of 2012 for us has been spent (mostly) in one spot…which is something we’re not quite used to! We’ve been living and working in Yangzhou, China and apart from some side trips to Hong Kong, Shanghai and Suzhou, we’ve been staying put. Teaching English to students aged 3-13, improving our website, making local friends, hanging out with the expat community, learning to speak Chinese and exploring our new home has all been pretty surreal. We love our students, our lifestyle and our new endeavours here in China!

So there you have it, 2012 in a nutshell. It has been a very epic year and there’s still 8 days left, who knows what else could happen?! We’ve both grown, changed and experienced so much together in the past 12 months and we know that 2013 definitely won’t fall short. Here’s to a healthy, joyful and prosperous New Year! 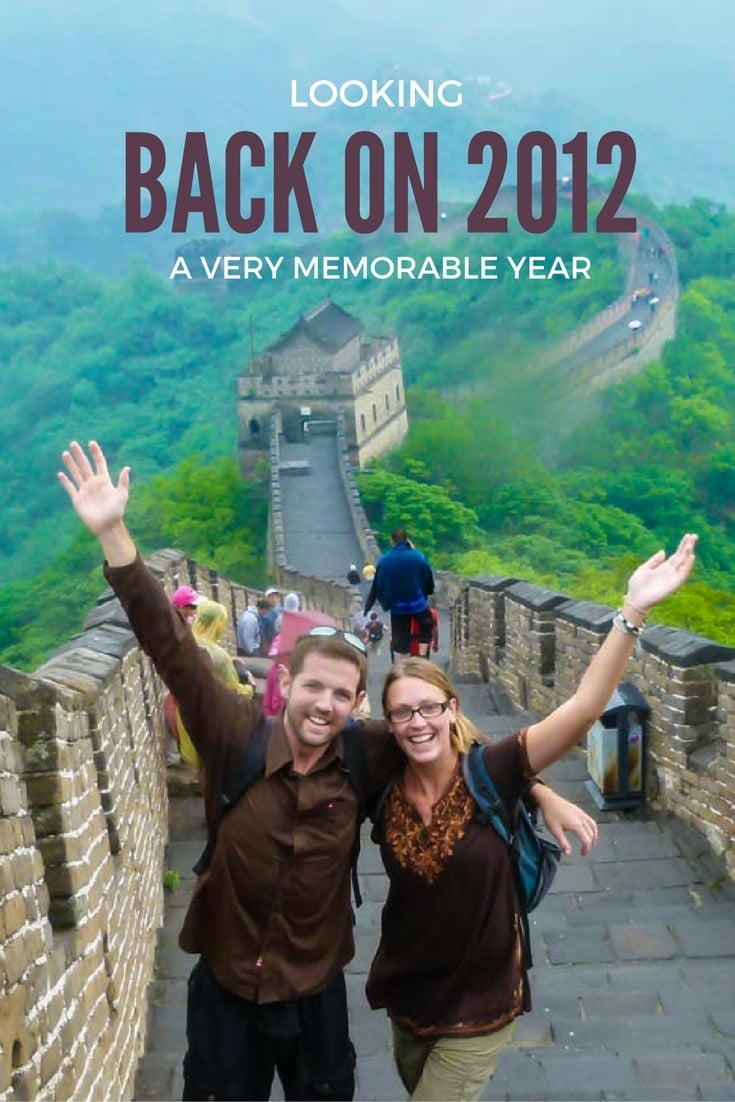